So, How DID Taylor Swift Ever Land a Career as a Singer, When, Well… Ouch

COLUMN: Well, grab some milk and cookies and your most comfy feetie pajamas — it’s story time with Auntie Danielle. Once upon a time, in the early 2000’s, the record companies were starting to feel the leak of what would eventually CRACK them in two and bankrupt them, financially, in 2004 — the mp3. For the first time ever — someone was stealing from THEM! Karma. She’s a beotch, I hear. 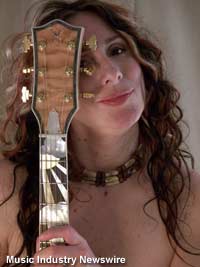 In an attempt to stop the revenue leak in 1997 that Napster, mp3.com, and many other vendors were “causing” (note — at any time, the industry could have jumped on the bandwagon and sold their mp3’s like iTunes, but the industry was in a lot of blustery denial back then), the recording industry decided to “cut costs”. That means “cut out any money not going directly to the label, like, cut the artists revenue” in laymen’s terms.

Artists are an expense to a major label, and the label very often forgets that the “expense” is the same thing that is drawing revenue. To the major label, artists are like pets — they cost money. You have to PAY them, things like PUBLISHING royalties on the music they write, and MECHANICAL royalties, and PRODUCT royalties. You have to pay them when they play concerts. For bands, you have to house and feed them ALL, on tour. I mean, what was a poor, antiquated, almost dinosauric music industry to do, to stop the revenue leak from their business model that was established in 1920 and had never been altered??

It was during this time that Britney Spears was manufactured. She was 100% their creation, their commodity. They wrote all her music, they produced all her music, so kept the publishing royalties. They pre-produced her with zillions of keyboard tracks in the studio using on-salary studio guys, so there were no mechanical royalties to pay out on the recording. They owned her images, her name, and well — her. The only musicians they paid were the ones that toured with her, the few that did as most of her concert was run off of recorded tracks — ADATS, in fact — synched up so Britney could dance her buns off and still “sing”, while lip-synching her whole show with a perfectly flat tummy.

And guess what these labels found out?

They found out that gamillions of people would STILL buy the music, STILL buy the swag, STILL pack the concert venues — and the label got to keep 9/10th of the cash (The other 10th went to Spear’s manager), because no one but them was involved in the publishing, mechanicals, and product! And best yet — there was only ONE — count it: O-N-E artist to deal with.

Was the industry gonna go back to signing bands that, you know, weren’t 16 year old hot chicks, who didn’t have the “naughty schoolgirl” marketing fantasy instantly built in, and wrote for themselves and demanded ROYALITES? Um — no. The cash cow in this realm was way, way, way, waaaaaay too lucrative.

So the “Britney Phenom” reigned, whether it was her, or a pre-produced hip hop in-studio guy singing groups who were gorgeous with washboard abs, for the last 10 years in music. Low overheard, high marketing value = TONS of income for the label.

The only problem was… the demographic that bought Britney grew up over a seven year period and didn’t want to hear “Whoops! I did it again!” over and over again. And the generation BEHIND the former Britney demographic was listening to their parents’ music — AC/DC, The Cure, Tears for Fears, Queen, Warrant.

Suddenly, there was a huge marketing hole in the industry. What to do, what to do? The industry was SO used to manufacturing their own talent that when it came time to REALLY crank some out — they had no idea what to do, because you can’t get a screaming Freddie Mercury from a keyboard.

So, the industry, which sat back on its laurels and had the motivation of a bloated slug at this point in the mp3’s scare, did what it does best — it stole talent. Where you may ask? Well, where else? From TV land, where American Idol dropped the musical bar another ten rungs and made karaoke and cruise-ship hand gestures the new “Fame”.

I mean, it’s not like the industry was going to go out and scout in CLUBS for bands! Puh-LEEZ!! That was SO 1990’s! Why pay the A&R rep, pay the development team, and pay a publicist — when ALL these people, hundreds and thousands of them actually, across the USA — were all auditioning to be famous? Why go to them, when they would kill themselves to come to you?

The music industry also realized what the sales industry has known for decades, that consumers bought PEOPLE, before they bought PRODUCT. Brand a person, and you’ve branded ANYTHING they do. Thanks to a completely decrepit TV format known as “reality TV”, which is not real at all but was developed to be able to skirt union pay scales for actors and crew — the music industry witnessed America falling in love with people’s own DRAMA.

Cha-CHING, went the cash registers in the labels’ minds. Television was the new Sunset Strip, the new Whiskey A Go-Go — the new “breaking point” for “Musicians” — well, or for cute people who know how to cover Journey in karaoke, and that’s all the labels needed at this point, was a warm body. AND — personal drama.

So suddenly, poor old Britney is on the cover of every tabloid, drunk, or dead, or bipolar; sure, her musical time had come and gone, but the labels were grooming her for her big “come back”. They had to protect that investment somehow. Plus, America loves an underdog, and sure enough, nearly ten years later, Britney was showered in MTV awards to a standing ovation. Marketing works.

In the meantime, America was used to hearing off-pitch newbies croon out “I’m All Out Of Love” on American Idol, so the “talent litmus” fell even FURTHER. Who needed the pitch corrector and who needed to lip synch?? America was EATING UP the sharps and the flats of these vocally challenged kids. Why? Because, darn it, they were TRYING HARD, that’s why.

The bloated, unmotivated, visionless major labels pull out a pen and make note in their handbook right under the heading of “Hot chicks can sell anything” — and wrote “Hot chicks don’t even have to sing. America Loves a Hot Underdog.”

Thus — Taylor Swift. Who strums a guitar and “writes” her own material (mostly, until it’s completely re-worked by her production team, but I think they, like, let her keep an occasional “G” chord in there somewhere), groomed and pitch corrected in the studio so she’s terrible live but no one cares because darn it, she’s ONLY a kid, postured perfectly as a Martyr thanks to Kanye West’s “impromptu” Grammy stunt two years ago which was most likely something he was paid to do, giving him the “bad boy” nudge that he needed for his album sales and she being the “victimized country girl” (typical “reality TV” scripting) , Taylor was suddenly poised as the “Golly Garsh Darn” underdog and handed a bazillion Grammy’s so America, who the major labels are still convinced is as dumb as a box of hair, would believe that the off-pitch, off-time, off-EVERYTHING — is what they should be buying.

Why would they do this?

Because it saves the labels millions and millions of dollars on their end, people. Think about it. If you get the listening public training their ears on Freddie Mercury or an Eddie Van Halen or Stevie Ray Vaughn or an Alanis Morisette — you have to actually FIND, and PAY, and WORK WITH — that kind of extraordinary talent. You have to meet them in the middle, or sometimes, put up with their demands. They are not replaceable. The label is not in control of the commodity that way.

And now that the labels understand what it is to own absolutely everything, and have to do almost no work at all to earn the money they do off the “new talent” they are presenting — well — you’d have to believe that a bear won’t crap in the woods to believe that the major label industry will ever go back to relinquishing that much control. The music BUSINESS is 96% Business – and 4% MUSIC.

Now, the moral of the story is that IT IS SO VERY IMPORTANT TO SPREAD THE WORD ABOUT LABELS that get behind their artists for BEING musical artists, like the label I am signed to, for instance — MAURICE THE FISH RECORDS!! Every artist on this label plays, sings, and writes their own material. Every artist has a hand in producing their own material. And it’s all GREAT. And not one person affiliated with this label thinks that America is as dumb as a box of hair. We know that the listening public LISTENS to music. And the music we make is for THAT public.

As a post-script, let it be known that no one faults Taylor Swift as a person for this debacle — she seems like a sweet gal who is giving it her all, and heck, what kid wouldn’t want to be tossed a bunch of Grammy’s while still learning to sing? It’s just a shame that the Grammy’s are now being awarded while an artist is still on a basic learning curve.

If this is the way awards are rolling, then perhaps there is hope of me winning a Nobel Peace Prize for my work in Theoretical Physics? I mean, I have a theory or two written down on a napkin somewhere around here that I could submit…. hold on, I’ll find it….