REVIEW: Playing together since 1986, Dennis Davison and Jonathan Lea have now done the impossible: they have created an original Christmas album that still rocks (well, folk-rocks, anyway). Plus, it covers all the emotions that surround the season, not just the traditional upbeat ones. That the album does so at all is deserving of a Five Star rating IMHO but they’ve pulled this off without being cloying or drowning us in kitsch, and that is just amazing. 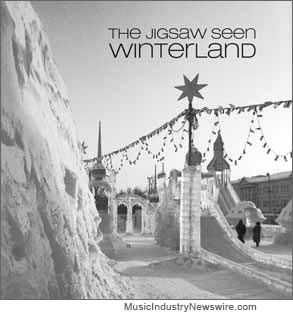 There is a downside to playing the “Winterland” album, or there is for me: I am not able to get through my day without one of their tunes invading my consciousness. For example, I played the opening track just once and then got pulled away by a phone call. Two hours later, I’m half-singing half-humming to myself “What about Christmas? What about promises?” and making those funny dah DAH dah dahdahdahdahdah sounds in a futile attempt to mimic the electric guitar riff in “What About Christmas?”

So I played more cuts. “December” is an instrumental that is beautiful when you’re in a good mood and melancholic when you’re not. Then you’re knocked upside the noggin by a song so lovely, so bittersweet, and so sonically nifty that it is just about perfect. I don’t know if a written review convinces you to try music but I have to tell you that the hook of “Snow Angels of Pigtown” instantaneously grabs onto some of the synapses inside your brain and doesn’t let you feel secure with your life until you’re joining in on the chorus. This song almost demands that you let it play with you for a while.

But I’m doing it under self-protest. In point-of-fact, I wanted to absolutely hate the album. It seemed to have a great number of annoying things attached to it. Impossible theme (c’mon, another holiday recording fer cryin’ out loud). Questionable marketing (my “advance copy” of the album came with a glossy printed sheet of critic quotes, letting me know I’m nowhere near as important as those who obviously got the “advance advance copy”).

The record label or publicity firm were also employing some gimmicks (there are tiny plastic too-perfect plastic phony plasticky snowflakes inside the CD case that fall out into your coffee or onto your lap if’n you’re trying to preview the damn thing in your car, and did I mention that they’re made out of plastic?) And so on.

But the thing is, the music on this recording is damn good. Oh wait, in keeping with the holidays, I guess that should be “jolly good.”

There are a lot of terrific influences in the background of The Jigsaw Seen. Their cover of Gordon Lightfoot’s “Circle of Steel” is telling. Having Dave Davies of The Kinks sing harmony vocals on that track is another tip. Even when they crank up the volume, it sure seems like they are people who loved the work of a whole bunch of singer-songwriters. And in their quieter moments, I get the impression they rather like the crunch of classic rock and the electricity of any number of rocking folkies.

Perhaps there is an even better comparison (and yes, I fully acknowledge that “they sound like” is the cheapest form of music writing, but damn it, this approach works!) They are kinda-sorta reminiscent of Squeeze. Both groups are headed by a dynamic writer/producer/performer duo, Davison and Lea here, Difford and Tilbrook in the U.K. band. Both groups create music that is almost impossibly catchy. And both sets of writers often come up with lyrics that can cut you right down to the bone marrow.

In “Winterland’s Gone,” Davison’s lyrics paint a picture that is at once bleak yet hopeful:

Snow falls and covers us, a cold dust of magic
Wind chimes are rattling in no particular time
Chilled bones and memories will beg for a thawing
Sleigh bells, rusted, jingling in your mind

One final thought, and it’s for anyone who saw the Richard Curtis film, “Love, Actually;” this album will help you recapture some of the poignant goodness of that experience. So, allow me to be one of the first to wish you: Happy Holidaze!