Why Is the Christian Music Market Ashamed of Itself? 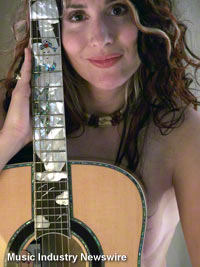 MuseWire COLUMN: The old “Bait and “Switch” trick has been around as long as human beings have slobbered on themselves into sentience. This trick is especially rampant in two fields: Sales and Marketing. So you can imagine my surprise as I’ve watched the ol’ “Bait and Switch” rear its head in none other than the Christian Music Market.

The Christian Music Market is one of those interesting anomalies, almost like studying Crypotzoology. No one can prove that Sasquatch is real, but at the same time, no one can prove that Amy Grant isn’t actually an android. Let me try another analogy: If a tree falls in the woods, and there’s a Dove Award attached to it, but no one knows what a Dove Award is…did it make a noise?

The Christian Music Market took huge wind into its sails thanks to Amy Grant, who is known as “The Queen of Christian Pop”. Grant holds the title of the best-selling Contemporary Christian music singer ever, selling over 30 million albums worldwide and winning five Grammys. Her 1982 break-out hit “El Shaddai” following 1979’s “My Father’s Eyes” got the ball rolling for cross-over Christian pop. Amy Grant, android or not, contemporized loving the Lord on FM airwaves and put mainstream Christian music on the map. Amy Grant identified as a Christian Artist.

In the nineties, the Christian Music Market was still riding the tide created by Amy Grant’s giant splash, stepping out to new pop crossover heights with “edgy” Christian rap / rock band DC Talk, whose songs were much less lovey-dovey by the time they got to their 1995 double platinum release, “Jesus Freak”, publicly admonished things like homosexuality and premarital sex. DC Talk identified as a Christian Artist.

Well, to save you from reading through the entire Amy-Grant-begat-DC-Talk Deuteronomy-styled list of Christian Musicians that followed, let it be said that niche markets can only survive for so long on their own, especially when the members of the niche are harshly judging one another. Christian Music fans were appalled that Amy Grant was stepping into the secular music market. They weren’t happy that DC Talk was getting pulled in that direction, too, even though DC Talk never quite made the leap. Without those platinum-selling crossover albums selling to all those pop music heathens out there, the Christian Music Market that had once held Amy Grant up as its flagship artist was now withering away because it no longer embraced Amy Grant as its flagship artist.

A once-booming industry signing every 16-year-old gal that could cover “Tennessee Christmas” with sincerity was now nearly broke. They realized good and quick that Christians, like any other niche group, were not enough to keep the Christian Music Industry doors open on their own. The same disdain the Christian community had toward Amy Grant once she divorced her husband and married Vince Gill was the same disdain for “wrong living” that was being channeled into song lyrics in what was left of the Christian Music Market in the late 90’s.

As you can imagine, that approach was not a friend maker in post-Grunge America. Pop listeners wanted to hear Alanis Morissette “go down on you in a theater”. So, many Christian labels closed their doors, and many Christian artists were turned out into the secular market. Yet without the niche community support, most of them disappeared within a year, as the secular market didn’t really want to be told it was going to hell in three minutes and fifteen seconds. It was around this time in early 2000 that the Christian Music Community began to re-think its marketing decisions.

Let’s fast forward our story to 2010. I was surfing around Facebook and I came across a link for the Montana Music Festival. I’m originally from Montana, so this of course caught my eye. The poster was really cool — black and white, in Psychedelic writing, with teepees pitched against a black-and-white sunset. It was a terrific poster, very Old-West-Meets-Woodstock, so kudos to whoever made it.

Well, of course, this incorporates two of my very favorite things – Montana and Music – so I click “become a fan”. I’m having thoughts of many music festivals past during Montana summers – ten thousand person events like ZooGrass in Billings, Rock The Rockies in Livingston, The Blue Grass Festival in Red Lodge, and all the Montana-made microbrew a person can drink. I’m thinking: This Montana Music Festival would be really fun to attend, or maybe even perform.

Okay, no biggie. I look back to the poster. Did I miss the word Christian? Is there a cross worked into the artwork, in a Rorschachian sort of way?

Is this event not a Christian Festival, yet the page owner is a Christian, so is using the fan page to proselytize? I keep reading, searching for any sort of definitive information. No, this definitely looks like a Christian event. I re-check the poster. I re-check the website. I’m looking for anything at al that says “Christian” – the word, a fish, a cross – anything.

Nothing. Other than very Christian-ese heavy blogs and posts by the page author. In fact, the event’s Teepee poster made the event appear very Mary Jane friendly, and I’m not talking about your little sister.

This was not the Christian Music Market that once proudly announced the self-proclaimed Christian music artists Amy Grant and DC Talk.

It’s important to note here my fascination with this aspect of the music industry: I’m a former non-denominational Christian pastor. I believe in God, and I believe in Jesus. Technically, that makes me a Christian, though I incorporate many other modalities of spirituality in my personal walk at this point in my life. However, back in the day, my world was much smaller, and much more simple, and I used to be on music ministry teams for non-denominational churches, so I definitely got my fill of Amy Grant. I graduated from praise bands to sitting on a church boards, and then on to Associate Pastor in a non-denominational Christian church, as unconscionable as that may seem.

However, anymore, I rarely call myself “A Christian” because to me, save some smaller churches, the term “Christian” has turned into something that I don’t recognize. It stands for a political movement, one that for the most part has become far too lofty and aggressive for me. And, my relationship with God is not a political movement. I believe there are many ways to get to God, and I don’t believe that any writing in any book gives me, a mere mortal, the authority to be the judge and jury of other people’s spiritual walk, or their understanding of God, or their relationship with God, so I leave those types of “spiritual politics” up to God who I think has bigger fish to fry right now. (The minute God becomes as petty as we are, there’s a big problem. But I digress.)

I thought it was odd that not once on the really cool Montana Music Festival’s Psychedelic promotional poster, or on the website, was it indicated that this was a Christian event. This is the same community that once turned its back on Amy Grant, because she wasn’t Christian enough. Now, they can’t even put the word CHRISTIAN on any of their promotional materials.

What are they ashamed of? Do they think that people won’t attend, if they see the words “Montana CHRISTIAN Music Festival”? Do they think the word “Christian” knocks them too far down the “cool” scale, thwarting their marketing plan? Do they think it puts a dent in their “hip-n-happening” armor? Or do they think that being honest about what the event entails will take away a market share, considering most outdoor Montana music festivals have a lot beach towels, brews, bikinis, and a line of people making out on the way to the outhouses?

There was no other reasonable option except that The Montana Music Festival event was being marketed as a Secular event, on purpose. If a person bought tickets to this event online, they’d have no idea that once they got there, wearing their cut-offs and bikini-top, dragging their cooler full of Jack and Cokes – the shocking disdain for not only their appearance, but their beverage choices, would be suffocating.

The only way a consumer would be tipped off that this was a Christian event would be if they paid attention to the posts on the Facebook or MySpace page, or Googled the Christian bands that were booked, whose Professional-Wrestler-Meets-Halo-Sounding names would most likely be mistaken for up-and-coming local secular talent, upon first glance. It was just another ploy in a long chain of “Bait and Switch” Christian music marketing. “Hey, everybody, look at this fun summertime event! Now lose the beer and praise the Lord!”

Yeah. That’s not going to go over very well in any Rocky Mountain state after you’ve paid $25.00 to get in.

I’ve watched this “Bait and Switch” technique rise up to put butts in the seats in non-denominational churches across the nation. The church attempts to sell Joe Public on the notion that it’s not a church, and that its pastors aren’t really pastors, but these feel-good guru kind-a-guys. This is the churches’ attempt to look secular and “like one of the gang” with their “Hey, man, it’s all good, we love universe!” attitude. That is, until the doors close, and then it’s like Mr. Roger’s Neighborhood, transitioning from one world to the next — the Hang Ten Flip Flops come off, the sweater gets zipped up, the hands shoot straight into the air, the praise music starts with “We Exalt Thee”, and it’s a flurry of “Jesus, Witness, Jesus, Witness”, which again, is fine, if that’s how someone wishes to spend part of their weekend. However, the bait-and-switch that got people through the door is not fine. I think it’s insulting to Christians and non-Christians alike. It’s saying, “What we stand for isn’t enough, so we have to try and be something else to entice you.” Or worse: “We will appeal to the sinner, and then trap them here with the Lord until they repent!”

That’s not a church. That’s a Venus Fly Trap in a bad Michael W. Smith sweater.

And, it is also a deception. No path to God, laid in deception, is a right path.

Further, any marketed function should be properly labeled, especially in entertainment. AC/DC’s crowd will not be digging any DC Talk. Other niche communities have embraced their titles, and it seems to work out just fine. For instance, attendees at Montana Gay Pride will note that it’s called MONTANA GAY PRIDE. It’s not called “The One Big Family Under God Party” so when Christian families everywhere show up, they are shocked to death to see guys in butt-less black leather chaps, holding hands.

Hey, Christian Music Industry — be what you are, be proud of what you stand for, then stand behind what you are. Don’t set a precedent for something you’re not, and then be disappointed when people don’t want to partake once they find out what your gig really is. Don’t blame “the world” and “Satan”. I mean, c’mon. Even Jesus thinks that’s stupid. I know, because Jesus was sent to this earth to be a walking and talking visual aid for how to do things right, and He never once tried to be anything else other than what He was. Which is why Jesus rocks, and the Christian Music Industry…well…doesn’t.

The Montana Music Festival was a Christian Music Festival. I think they should have been very proud that is what they brought to Billings, Montana, if that was their goal. I don’t really see the point of being Peter, denying Christ. You’re in or not. So put “Christian” on your poster before the rooster crows three times.

Article is Copr. © 2011 by Danielle Egnew – all rights reserved.