As many of you who know me already know, I’m a bit of a bargain hound, or deal hunter, or whatever you might call it. Every month I get a raft of “wow” deals on music gear, software, etc., and while I had started to do a special page on the site, I found it a pain to update. Taking after some similar blogs in the PC field, I decided to just post the stuff as the mood strikes so you’ll know about it when the deal is still hot, and you have time to decide whether to strike while the getting is good.

Some of the deals I will cover from time to time will be from software companies, sometimes from music stores, sometimes in combination of the two. 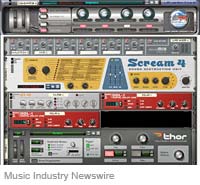 First, this is one of those you gotta go check it out kind of things if you are a user of Propellerhead’s popular REASON 4 software. The groovy folks over at SONIC REALITY have done a killer deal for Halloween on their Sonic Refill Ultra Loaded bundle, which normally lists for $499 ($399 street), which is “for a very very short time” selling for only $99 (!) in download format. This is literally a snooze you lose offering, as it may only last a couple more “held over” days from now until Nov. 15, 2009. Here’s the link to the group buy deal: www.esoundz.com/details.php?ProductID=4114 . Actually, even at $399 it’s a bargain since it includes 38 refill packs, which works out to about 15GB or so (guesstimate). These are super quality guitars, brass, vintage keyboards, Mellotron, drums, Thor patches, REX loops, etc.

Secondly, our pals over at AudioMIDI .com have again managed to get an amazing “no brainer deal” on download only virtual instruments. AAS Ultra Analog VA-1 is a superb virtual analog instrument that usually sells for a couple of hundred bucks in boxed form, but for a “limited time,” they have it for a paltry $15 (yeah, more than ten, less than twenty). This is one of those no-brainer kind of deals … why settle for some of the crappy, buggy, “free” VST instruments on the Web, when you can get a pro product for less than a decent pizza? Grab it here: (link no longer valid).

If you need a decent 49-key keyboard controller at a ridiculous price (uses USB for MIDI), the brand spanking new M-Audio Oxygen 39 MkIII (mark 3), has just dropped at $139. Which is pretty amazing when you look at all the knobs and sliders, and full sized keys, too. AudioMIDI has these, too, but they are available everywhere you buy music stuff.

And it’s contest time in the valley of the holiday online music retailers. Sweetwater is giving away something cool everyday, and they don’t sell your personal info to the Taliban, so check out the easy contest entry here: http://www.sweetwater.com/feature/24-day_giveaway/ .

Open Labs is having a contest to “guess their new product” apparently being announced Nov. 18th, and which is NOT a new keyboard or drum machine, as their past products have been. The running theme seems to be folks tend to be thinking it’s some kind of DJ gear, but this is one of those make a guess, and you might win things. Guess away here: (link no longer valid). While you’re there, you might trip over to OL’s main site, and check out the remix/composition contest with Tommy Lee (that Tommy Lee, yes), where you might be on his next album and get a free Open Labs DBeat.

Well, that’s all I got in me pocket for right now. If you hear of a smokin’ deal, be sure to drop me a line. 🙂 I have it in mind to do this every Tuesday, so while we count down to the holidays and the January NAMM show, we should be seeing a LOT of deals due to the slow economy, and so forth. So, keep your eyes open!

(Editorial note: I have no involvement with any of the above named companies, beyond any normal end-user of a commercial product. No promotional fee, trade or other consideration has been provided in any way for mention of the above items. Disclosure: a NFR review copy of Sonic Reality’s Ultra Loaded refill bundle was provided at no charge for purposes of an editorial review, which can be found on this magazine site, here https://musewire.com/review-sonic-reality-sonic-refill-ultra-loaded/ .)