MuseWire REVIEW: With so many XLR to USB adapters now available on the market, it’s tough to decide upon which interface will be the best bang for the buck. The Shure x2u XLR to USB Adapter has shot out in front of the pack, acting not only as a pocket-sized adapter that can turn any mic cable into an instant recording opportunity, but also acting as a mini mixing board — all fitting in the palm of one’s hand. 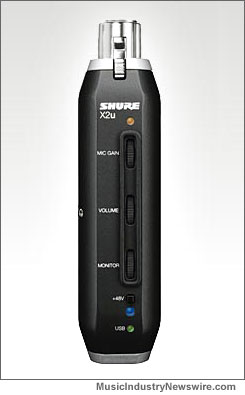 If there was such a thing, the x2u would be the Cadillac of USB adapters. With an 1/8-inch headphone jack, easy access mic gain and volume knobs, a monitor knob that allows the user to switch from hearing what’s being recorded live to what is being played back just by the roll of a switch, to even a +48V boost that drives phantom powered mics, the x2u is a one-stop recording solution.

A lot of attention to detail appears to have been placed into the x2u interface, making this unit a breeze to operate. I used the x2u in conjunction with four different workhorse microphones with which I am very familiar, to evaluate how the x2u handles frequency transparency: The Audio-Technica P635 Lo-Z Dynamic, the Shure SM27 large-diaphragm side-address cardioid condenser, the MXL 990 large-diaphragm condenser, and the staple Shure SM58. With each microphone, the x2u maintained the native audio characteristics without coloring, thinning, or augmenting the signal tone, or adding hiss when the +48V phantom power pad was activated – a hurdle quite common when dealing with solid state single-unit adapters.

Not only was the original tone shaping characteristic from each microphone maintained through the x2u’s translation from three pin to USB, but the silence of the unit itself produced better than CD quality wav files, represented as 16 bit at a 48kHz sample rate.

As a software test, I plugged the x2u into a standard non-optimized laptop whose operating system is Windows Vista, to see if the unit’s code could withstand the many Vista audio bugs present in so many over-the-counter consumer computers. The x2u fired up and performed like a dream, with none of the traditional Vista audio artifacts often caused by out-of-synch USB translation. So kudos to Shure’s software developers on that one.

The x2u even comes with its own carrying case and USB cable, so it can be tucked into any gig bag for on-the-spot live recording, turning any environment into a recording suite. The ease of the x2u’s plug and play format (compatible with Windows 7, Vista, XP, 2000, and Mac OS X 10.1 or later), coupled with zero latency in the headphone monitoring process, truly anchors the x2u as an affordable and must-have tool in the kit of any on-the-go musician or media professional.