MuseWire COLUMN: Rock and roll allows for a wide range of styles, including music that shocks listeners, attacks social conventions, intimidates casual onlookers, and angers the vast majority of people. A band called Foul Play accomplishes all of those things. Fortunately, they are quite good. And very funny. 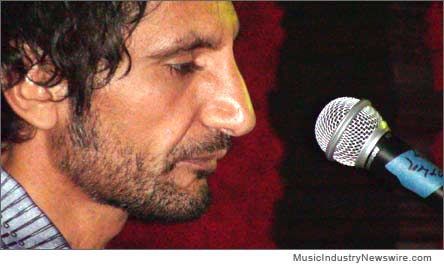 It is eleven-thirty on a Thursday night and Foul Play is locked into the rhythm, pounding out a beat so infectious that even haters in the audience are tapping their feet. And the band does have haters, because this seven-piece group attacks your ideas of what should happen at a rock show.

For example, Sam Aiden, lead instigator (and lead singer), opens their set with a quiet sing-song ditty containing lyrics so offensive that they cannot be printed here. Stopping mid-sentence and standing perfectly still, he asks “Do I have your attention now?” You bet. Whereupon the whole band launches into a rock-fusion number that assaults your head while enticing your body.

Theater of Rock
It’s an alienation effect that is worthy of the theater of Bertolt Brecht, in which viewers are reminded that they are watching a performance instead of being caught up in it. The idea is to bring about social change by causing audience members to consider their own lives instead of getting distracted by the theatricality of the presentation.

Not that it always works, partly because the band plays their clever arrangements with such power that rational thought tends to be obliterated by the monstrous beat and bottom end of a killer drummer and bassist. But then Aiden starts another song with a monologue about posers wearing a certain style of jeans that serve to hide their non-committed and phony selves. . . and something strange happens: one member of the audience is so offended that he starts heckling the band.

Aiden puts down his guitar, strides into the crowd, finds the guy, grabs him by the waistband of his poser jeans and starts pulling him toward the middle of the room, saying “Let’s settle this right out there.” Security separates the two and the show goes on.

I thought it was a terrific bit of stagecraft, but the club staff assured me it was a real confrontation. Either way, I think Foul Play should leave it in the act because it is entertaining and thrilling, albeit in a dangerous sort of way.

Music That Stings
Foul Play comes at you on a variety of levels. First, they are as tight and nasty a rock band as you’d ever expect to find in a local club. They can play stinging stuff at high, medium or low volume. Next, they incorporate trumpet and sax into the twin guitar/bass/drum set-up, so there are always a couple of interlocking patterns that keep tugging at your hips.

Finally, they structure their songs to allow the humor to easily coexist with the dynamic sonic crunch of their sound. You can be laughing one minute and hurling your body back and forth the next.

They even have humor and wit in their wildest musical passages. Near the end of the show, Aiden hunches over his Telecaster and begins strumming at a machine-gun pace. He kept it up for more than two minutes straight without ever altering a note. Funny? Yes. Overkill? Well, sure, that might have been a problem except that Bill Learned, the lead guitarist, took a beautifully crafted two-minute solo while standing far back in the shadows.

So the audience gets a nifty stage picture of someone totally rocking out on a single unchanging chord AND they get to hear a stellar guitar solo intertwined with the sonic assault. Every musician in the room was straining to see what Learned was playing while enjoying the posturing of Aiden. Thus, Foul Play again gets to have things both ways.

Foul Play is funny yet socially relevant, irreverent while musically exceptional, stoopid and subtle, and they rock with just the right amount of jazz and funk in the mix. Unless you are among their targets for satire, you can’t help but smile and enjoy this band.

Oath of Rock
Handed out at their shows is a nicely-printed copy of the band’s Oath of Rock signed by Aidun in his own blood. He sometimes narrates part of it over the P.A. while the band percolates in the background. It reads, in part:

I, as a member of Foul Play, the fearless band, do solemnly swear to faithfully serve Rock ‘n’ Roll, our most endangered human resource, and to respect and safeguard the rights and liberties of all Rockers….

I have faith in Rock to fulfill my deepest impulses of joy, sorrow, power, rage, sex and hope. I will sustain the integrity of Rock by tearing down the prison of conformity, common belief, and pop music.

…I do sincerely promise and swear to safeguard the security of Rock by remaining free of any said girlfriends or corporate shackles….

Should I break my oath, I shall be willing to submit myself to severe mockery and derision while the band looks for my replacement.

Told ya they were fun.

Photos of Sam Aiden and the Foul Play brass section taken by and © JSG at The Other Door Bar. Article is Copr. © 2011 by John Scott G, originally published on MusicIndustryNewswire-dot-com before the site was revamped as MuseWire.com in March 2015.