Review: Guitars That Fan the Flames of Desire

Celebrating an endorsement between G-Man Music and the fiery axe-makers known as Minarik Guitars, Scott G (The G-Man) reviews the Minarik Inferno X-treme, a design that is fueling the excitement of a new generation of musicians.

From the Fender Telecaster to the Gibson Flying V, and from the Ibanez Iceman to the B.C. Rich Warlock, some guitar shapes are forever branded on our consciousness, and now there’s a new one: the Minarik Inferno X-treme.

The body shape of the Inferno erupts in furious fingers of flame. If ever there was a guitar design destined to ignite the imagination of young players, especially boys and girls who want to rock, this is it. (Or perhaps that should be spelled rawk.) 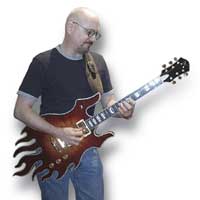 Not that the Inferno X-treme lacks subtlety. With scientifically placed tone chambers, this instrument can sing sweetly if that’s what you desire. Or, it can live up to its appearance and enable you to carve sonic craters in the club, in the arena, and in the parking lot.

Look At That One!
Although this guitar has a look that will inspire thousands of preteen statements along the lines of “Mom, that’s the one I want,” I suspect that tons of established players will find it useful in the studio or on the road because of its delicate balance, sleek feel, and stunning versatility. (And besides, the cunningly crafted guitar is also available in a more traditional body shape.)

“So, what’s the story on Minarik Guitars?” I can hear you ask. As the designer of the B.C. Rich Goddess Warlock and several other noteworthy models, Marc Minarik already has a legacy in the business. Now heading up his own company, Minarik has the goal of fusing quality workmanship with visually exciting design concepts.

Actually, his plan is much more complex than “make it attractive and build it right.” Marc Minarik is as eager to talk about the playability of his guitars as about their construction and appearance. And if you inquire about the light weight and the chambered body, he is just as pleased to demonstrate the superior nature of his firm’s products.

Body of Flame
The flame-shaped body isn’t just flashy; the size and curve of the flames have been carefully calculated to positively affect the tone and balance of the instrument. The flame design is eye-candy, but it’s the application of the physics of sound that makes the Minarik Inferno X-treme really hot.

With a wonderful combination of form and function, the Minarik guitar line may have some interesting side effects, like bringing vitality to retail sales, launching a new generation of guitar players, and saving music from passive pop.

Not bad for a guy with a dream about a flaming guitar.