If you are even remotely interested in tech gadgets you may have heard of a strange new thing called Google Glass. “Glass” is a proof of concept wearable computing technology given to 8,000 “test heads” to wear, share, and socialize with starting Spring/Summer 2013.

I spoke with David Ciccarelli, Canada’s first “Google Glass Explorer,” as they are called, to see what he really thinks of this brave new experiment from the Googleplex.

But what is Google Glass exactly? A cool pair of sunglasses, a cosplay mash-up of Star Trek’s Geordi LaForge and those who dream of a machine-human interface in our lifetime, or what?

One way to look at it (pun intended) is to imagine something you can wear, with a small glass eyepiece (which can go over sunshades if needed), which provides a “heads-up display” for relevant information such as your flight status while waiting at an airport, augmented reality (in a very small way) to show you maps to trails while hiking in the mountains, or even translate phrases for you in a produce market.

In fact, Google uses these examples on their “What it Does” page, here: http://www.google.com/glass/start/what-it-does/ .

Somebody I’ve known professionally for some time, David Ciccarelli, CEO and co-founder of Voices.com, is one of the first “explorers” chosen to test out the Google Glass experience, and today I spoke with him to get his take on Google’s idea for wearable computing.

Christopher Simmons: Hi, David: Just to get the disclosures out of the way, we’ve worked together in one form or another over the past decade with my company helping to promote yours; however, for this interview I’m taking off that hat and putting on my 30 year journalist hat since I think this is a pretty cool gadget and I’m really curious what you think about Google Glass. We’re not here to talk about our respective companies, but really to explore what it’s like being an early Explorer with this new tech.

Chris: Tell me a little bit about how you got involved in this, how you were selected to be an “explorer.”

David: Earlier this year, I lived in Silicon Valley for three months during which time I heard about a contest being held on Twitter and Google+ called #ifihadglass.

To enter, you simply needed to Tweet or publish to your Google+ page what you would do if you had Google Glass and then add the hash tag #ifihadglass.

#IfIHadGlass As an audio engineer, I will do something incredibly entrepreneurial with sound or the human voice.

Apparently, Google received over 200,000 submissions. They worked with a third party firm and hand selected all 8,000 Google Glass explorers. I am grateful to have been chosen.

Chris: What was it like with the first “out of box” experience, putting it together and getting the system started. The ergonomics.

David: Google Glass wasn’t shipped to me. Rather, I had to go to New York City to pick up Glass in person and go through a training session. After selecting the color I wanted, I unboxed Glass and was shown what the few buttons did. There’s a power button and a button on top to take pictures. There’s also what I describe as a trackpad along the right arm of Google Glass that you use to navigate through your timeline as displayed on the crystal display.

Chris: What some people have missed is the fact that this is not a product you can go buy right now, or even pre-order. It’s really a use test, where Google has in some ways “crowd sourced” interesting beta testers to try this out in the real world and provide feedback. SO, to get to it: what do you think of Google Glass? What do you like the most, and what bothers you about the product?

David: Like any new technology, you have to figure out if it has a place in your personal life. Over the next couple of days touring New York City with my son, I had an amazing opportunity to put Google Glass to the test. We visited the American Museum of Natural History, Central Park’s Great Lawn, The Metropolitan Museum of Art and the Central Park Zoo. 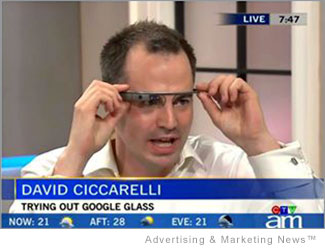 I took photos, videos, got directions and even took a phone call. Glass sits nicely above your line of sight, so it’s unobtrusive. I wore it for eight hours and it never felt uncomfortable. In fact, I quite enjoyed knowing I could take a picture or video very quickly using voice commands, all from a unique perspective – my point of view.

If there were any drawbacks, I’d say that navigating websites could be improved. Sliding your finger forwards and backwards along the arm in order to scroll a web page up and down is not intuitive. I’d love for Google Glass to pick up hand gestures so I could simply wave my hand up or down to scroll.

Chris: When the Apple iPad first launched, I wrote an article about how such devices could be a tool for augmented reality, based on the initial sky/starmap apps (link: https://musewire.com/960/stargazing-on-the-ipad-a-window-to-augmented-reality/ ). The idea of going to the ruins in Europe or the Middle East, and being able to see overlays of what it used to look like is fascinating. It occurs to me that this could potentially do something similar at some point. What are your thoughts on that? Are there any elements in this test bed for Google Glass to play with that idea?

David: There is certainly potential. In fact, the potential for augmented reality is likely the greatest with Google Glass than any other piece of technology I’ve seen. Already, the “Get Directions” command is pretty close. It’s a 3-D map with directions that you see as an overlay on the street where you are walking.

Chris: How have folks reacted to your walking about with the tech. Do you think this will become a commonplace item if Google brings it to market, or perhaps too much of a distraction for daily lives already over-burdened with tech?

David: As I mentioned earlier, everyone will have to make a personal decision as to whether Google Glass is right for them, and then decide when and where they’ll use it. Nearly everyone I’ve shown it to, by means of giving hands-on demos for 5 minutes, has been blown away. The reactions are overwhelmingly positive. The critical elements for success have nothing to do with the technology of Google Glass but rather the price point and if Google can make it compatible with prescription lenses. If Google can sort those two elements out, then they’ve got a home run.

Chris: Have you already provided feedback to Google about it, and if you can speak outside of any NDA, what did you say and what was the response?

David: Yes, I’ve provided some feedback to Google detailing the same highlights and challenges as described here. Google is committed to Glass and they’ve said and proven that they are also committed to monthly software updates. The first one I received provided a full web browser that was really impressive. It means that having a mobile-ready website or a site using responsive design techniques is all the more important. Google’s in it for the long haul with Glass and when it finally comes to market, this will be an amazing product.

Chris: Finally, what really surprised you or excited you about Google Glass that was totally unexpected, if anything. Or, any final thoughts on “Google Glass” ?

David: What’s surprised me most is the general interest in Google Glass. I had so much interest from friends and business colleagues that I figured hosting an open house at our office would be the best way to give demos and show people how it works. Two hundred people showed up for the open house at Voices.com and after a brief 10-minute presentation, I proceeded to give demos to everyone who was interested. Three hours later, everyone who had lined up got a demo! As I said, the sheer interest in the product is what amazed me most. Google Glass has the potential to offer a new paradigm for mobile computing.

Update 7.15.13; 6:45pm PDT: I neglected to include a section of the original article when published, that cited Eric Schmidt of Google stating that they “planned to bring Google Glass to market within one year of the Explorers using them.” One U.K. article quoting a Google Glass Developer claimed that the retail price in the U.K. would be about 200 pounds, which might imply a $399 price point here in the U.S. Later reports said the price would more likely be US$1299. For information on developing software for Glass and the software technology behind Glass, see Google’s page here: https://developers.google.com/glass/ . — Christopher Simmons.

Article is Copr. © 2013 by Christopher Simmons and first published on Advertising and Marketing News (formerly AdvertisingIndustryNewswireDOTCOM), before finding its permanent home here on Ga-Ga.com, a publication of NEOTROPE®; all reprint and publication rights reserved. This unbiased article is neither paid nor sponsored content and no fee or any other consideration has been made to this site, its publisher, or the author.