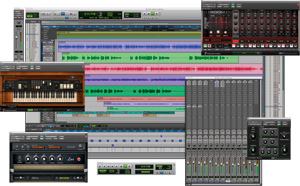 Avid has a detailed PDF (link below) which details over 100 fixes to PT8, but some of the more notable fixes include editing (keyboard shortcuts), video (QuickTime error under Vista), MIDI errors with Reason 4 via Rewire, and MIDI zooming; Digidesign databases are now stored on system drive rather than individual volumes (about time!), and memory improvements have been made when indexing; “don’t show dialog again” option added to many common error and warning dialog windows (again, thank you!); horizontal scrolling improvement with trackballs and Apple Mighty Mouse; fixes to system crash with certain Bomb Factory plug-ins installed (often inspiring ironic comments for the brand of the plug-ins!).

Notably for Windows users running Vista, or who have installed IE8 under WinXP SP3; a major fix for Pro Tools covers the DAW not launching when Internet 8 is installed on Windows. Some plugins will still not work properly if IE8 is installed (!), including Structure, Strike, Velvet, and Hybrid. They are working on the issue (this would be a good item to watch closely for “hot fixes”).

If moving to Windows 7, there are also updated hardware drivers. Primarily this update is a “bug fix” update, and not a “new features” update (which would be a full dot revision, or PT 8.1).

For those using Avid’s new ELEVEN rack hardware, there are some reports of “runtime errors” with Windows PT LE when launching a new session, and Avid is recommending users of that hardware NOT update to this version if using the Windows version of LE. This likely means there will be an 8.0.4 dot revision shortly, or a hot fix specifically for Eleven owners. Ultra paranoid folk may want to wait for that.

Link to PDF detailed the fixes to PT 8.0.3:
http://akmedia.digidesign.com/support/docs/Pro_Tools_803_Release_Notes_63870.pdf

Or, more information on the update for both OS platforms:
http://www.digidesign.com/index.cfm?navid=48&langid=100&itemid=40434