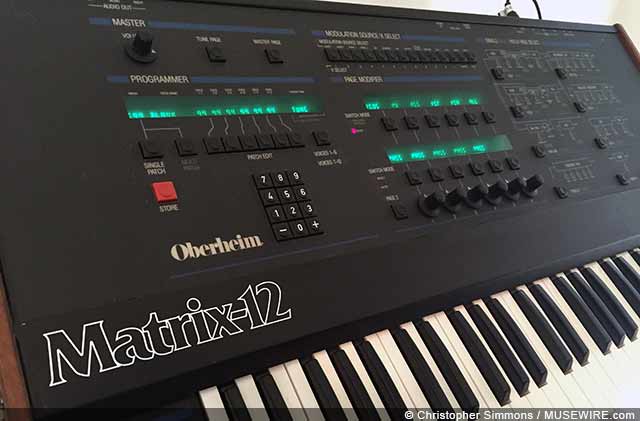 When Arturia recently announced and then released their latest V-Collection 4 of virtual instruments, and announced one of the new products would be a recreation of the venerable Oberheim Matrix-12, I was both overjoyed and impressed they had actually tackled this beast. I own one at present (see photo), so it’s not like I was still lusting after ownership in the way I once did, but I do remember that feeling quite acutely.

I was one of those young musicians playing keyboards in local bands in the 80s who often went window shopping at the local music gear stores in L.A., and lusted after the Yamaha DX1, SCI Prophet 10, Oberheim Matrix-12, Jupiter 8, MemoryMoog and the like. I could put on headphones and spend a short time playing each one (luckily some music stores didn’t come in and poke you to “move along” in those days). With my limited budget I ended up with the Matrix 6R and XK controller, SCI Pro One and Prophet 600, and much smaller Yamaha DX; and other far more limited kit like the Korg Poly-800. I’ve owned a lot of gear over the past 30 years, both real and virtual.

Still for many years, it was a latent desire to “own” the mighty Matrix in some form. When I started adding a healthy dose of sample software to my studio, in the early days of Nemesys Gigasampler, I spent a lot of time trying to hunt down a limited produced sample collection for GS to no avail; it sold out too quickly and was gone. I had some M12 samples for my Kurzweil K2000, but those were in small supply beyond the typical brass and bass sounds. Older sample hardware couldn’t capture those 12-25 second evolving textures to any degree.

Even Spectrasonics, when they included some M12 sounds in Omnisphere, are few and far between the rest of the burning pianos and bats in caves sounds (much like the CS80, frankly).

Later on the closest I could get on limited budget was chaining two Matrix-1000s, with one panned far left, the other far right, and slightly detuned off each other (try it, it is really awesome). But even this was not the same. Say what you will about VCOs vs. DCOs, they are not quite the same. And the Matrix-1000 pales in comparison for its depth of sound making.

And the 15 filter types in the Matrix-12, amazing modulation matrix, FM, etc., make it a truly unique analog synth, even today. Very powerful, amazing sound, and even reliable (yes, okay — eventually you may need to replace the power supply, and one of your wood end-caps might have split, encoders might need cleaning, etc.).

I was lucky to have a couple of good years around 2007-2009 (right before the banking collapse) and had a bunch of extra money, which at the time home prices were absurdly inflated here in So Cal. (more than right now), so I chose instead to buy some vintage gear. I went kind of nuts to the tune of $50K in gear acquisition syndrome (GAS). And one of my first buys was a Matrix-12.

Additionally, around Christmas 2014 I started to sample both my Matrix-1000 dual-mode and Matrix-12 synths into Autosampler on Mac OSX for posterity. So, I’ve been listening to “the sound” quite a bit the past few months.

The point of that entire back-story is that I’m in a good position to “ear ball” how the new Arturia Matrix 12 V sounds and try to leave the “software is never as good as the original” argument kicked out the front door. 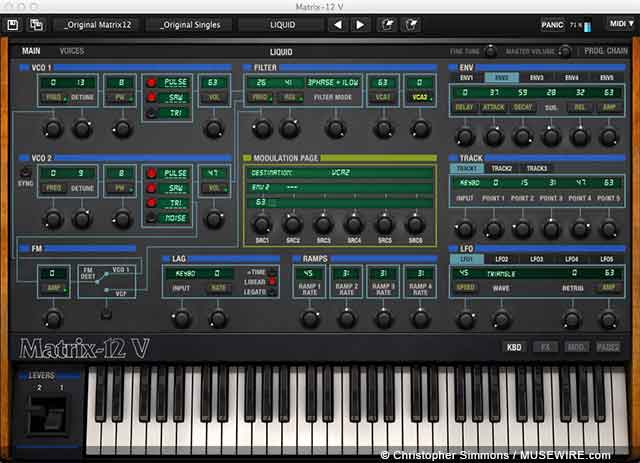 Probably the best introduction to the Matrix-12 (M12), if you haven’t known much about it beyond YouTube videos, is the quite good introductory tutorials created/hosted by Arturia’s Glen Darcey, VP Product Management, as well as the brief history of Oberheim in the Matrix 12 V (M12V) manual.

The new Arturia control center is a little reminiscent of the one which competitor Native Instruments uses, and that’s not a bad thing. After authorization – in my case I used my existing USB keys for backup, as I am not one of the crybabies who think they are the devil’s plow horse – I loaded up the standalone version under OSX, and it loaded right away, asked me to set my audio and MIDI (only thing I needed to change was 44khz to 48khz).

If I sold my real Matrix-12 keyboard tomorrow and this was all I had for the rest of my life, I’d be totally happy with that. It’s that good.

A thoughtful test tone button lets you make sure you have sound. Yes, for those who hate the USB “eLicenser” copy-protection keys, you can now choose to keep a local authorization file active which ties the software to your device. This was much requested, and many V Collection users are now all smiley faced.

First off, the virtual instrument looks gorgeous, is very well laid out while keeping some of the skeuomorphism of the real world device, right down to skinny wood end pieces, blue stripes for control sections and green displays (VFDs) for value readouts.

This is actually how many of us would have wished the real M12 would have looked with more knobs and displays (or at least more like this than the original layout). It’s easy to get to everything, and easy to switch between single mode and multi-mode.

My second thought, in playing with some of the sounds and editing a patch, was that Arturia could entirely start a side business with this as a patch editor for the real M12 and many of us would be happy to plop down $99 for this kind of ease of use (hint!).

So, how does it sound? One word: brilliant. If you load up any of the original factory patches, which thankfully have no effects applied, you can easily compare the M12V to its inspiration. Guess what, Arturia nailed it. Even a more complex evolving sound like “Liquid” actually sounds like the original instrument.

If you were to bring up the DCO vs. VCO argument here, that is a toughie. Anything once “recorded” always sounds different and the listener has a lot to do with any such testing beyond a wave scope. I suppose if you asked me to compare the M12V in that context it sounds more like the real M12 than it does the Matrix-1000. So, all good on that front.

Using my “ear-balls” I found nothing to make me decry Arturia’s efforts here. The virtual version has the same secret sauce as the original. You can hear the vibe on every patch.

Going through some of the more complex sounds, I kept saying to myself “nailed it” and “awesome sauce” (which sadly, I’ve picked up from one of the local TV commercials). I quite like many of the new sounds provided, but I spent the first good while comparing original patches to see how it sounded compared to my M12, and nobody should reasonably complain this is not spot-on. Bravo.

Even the page 2 settings view is retained and is a huge improvement over the “where am I again” sense of using the real M12. And the multi setting allows you to quickly build up complex multi-layered sounds, splits and crossover points from existing single patches so much more quickly than the real keyboard. Yummy!

So the basic features of the M12V sound include:

As with many of Arturia’s other “recreations,” the M12V includes some niceties like an analog effects (FX) section, and expanded modulation matrix with 40 points compared to original 20.

The analog FX include a nice chorus (many of us ran our synths through Roland chorus pedals back in the day, myself using a CE3), delay line which often made leads into the lead synths you hear on albums (most Moog lead patches suck without a delay, for instance), and reverb. And these can be put into an FX chain.

A master volume is added which can be saved with each patch. Be aware, just like the original synth, some sounds do get louder and so a sound might be pleasantly at -20 with two notes pressed, but when you play 6 notes it might ping right up to 0. This is just like the original, where one patch might be too loud, the next too quiet. In this case you can dial in your preference and save it if you play a certain sound and it’s always too loud. 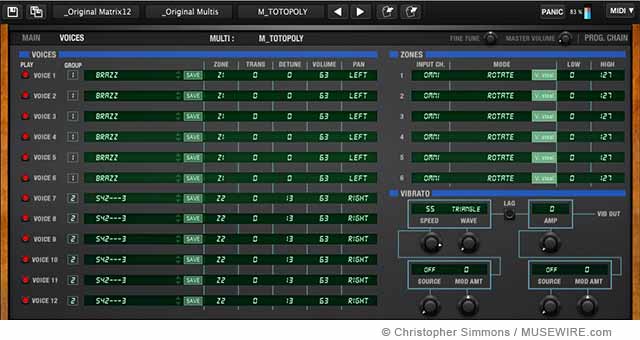 The v-synth was very stable both in standalone and in Logic Pro X, and never crashed on me (okay, so I do have 32GB RAM and 8-cores of Xeon goodness). There were no “dammit” moments — keeping in mind I didn’t press every button under every possible use.

Okay, the upshot is I love this new virtual instrument. While the purists are not going to start dumping their gear on eBay, if I sold my real Matrix-12 keyboard tomorrow and this was all I had for the rest of my life, I’d be totally happy with that. It’s that good. While I was tempted to do a bunch of recordings, comparing the two side-by-side (and I may still do that), frankly it was too hot here in my So. California home studio today, and I don’t like to run any of my gear when it gets to be 85F and higher in here.

I’m confident in my statement they’ve nailed it, even without the expected Soundcloud A/B audio files posted.

Sure it’s maybe 5 percent “off” from the real deal when I crank both up and listen to them side by side, but big whoop. Not every keyboard even sounds 100% identical either and technically you’d need to take the audio out from one PC and run it into your I/O device just like the keyboard to do true comparo.

And to be fair, there are some first version teething issues which likely should have been caught prior to launch, but I imagine we’ll see a few dot updates to address these. Specifically there are some issues where the behavior of a single voice can be cancelled out, and also some instances where the speed of the LFO is off, or a sound just is totally wrong when comparing the virtual instrument to the real deal. Still, for a couple hundred bucks vs. (US)$5000 you’re getting the feel of it on a shoestring by comparison and I’m confident they will dial-in the few quirks once they get feedback and reviews from other M12 “faithful.”

Using my “ear-balls” I found nothing to make me decry Arturia’s efforts here. The virtual version has the same secret sauce as the original. You can hear the vibe on every patch; and on headphones or on my studio monitors it took me back to the mid-1980s and the smile was there. Yeah, man, awesome: I want one.

Review is Copr. © 2015 by Christopher Laird Simmons and originally published on MuseWire.com – a publication of Neotrope® – all commercial and reprint rights reserved. No fee or other consideration was paid in generating this unbiased review. NFR was provided for ability to test full version.