COLUMN: When I was asked to join a program encouraging kids to stay in school, I said yes. Did I do it for the right reason? Nope. It was a selfish act at the start. But I changed my attitude. After reading about the plan, perhaps you will, too. Here’s the situation: I was at the monthly meeting of the AIMP (Assn. of Independent Music Publishers). Executive director Kasaan Steigen asked members to participate in Operation Hope’s 5 Million Kids initiative. My joining in was not an altruistic act. Let me explain why. 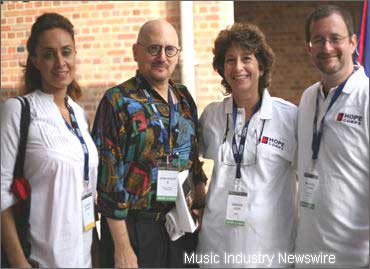 That Was Then
Years ago, I was part of the Artist-in-Residence program funded by the National Endowment for the Humanities. (Yes, there was a time when this country recognized that the arts were important and contributed to the public good.) As part of the arts funding, I was able to appear at a middle school in Compton, doing my best to talk about how art can enrich people’s lives.

It was an odd experience because I was only able to get through to about one-third of the students in classrooms where I spoke. Kids in the front row would hang on every word, eager to take in any bit of information I could bring them. These were the students who volunteered to help make a documentary about their school and who took part in an assembly we held at the end of the semester to show student films.

On the other hand, the kids who occupied the middle section of the room were quite often like the noisemakers on an old Cheech and Chong comedy routine where the teacher vainly tries to retain some order in the class. As for the back of the room, I was advised not to venture back there. That area was full of sullen, staring, silent boys who didn’t want any part of me, the teacher, the class, the discussion, the filmmaking, or the assembly.

This Is Now
So, when I heard that the launch of the 5MK would be at Bret Harte Middle School in Inglewood just a few miles from Compton, I immediately flashed back to my previous experience. But I volunteered anyway. My self-serving motives were to interact with other members of the AIMP and maybe get Golosio Publishing’s name into a press release. But then I arrived at the school and began interacting with the students and faculty and I was completely turned around. It was an optimistic experience and a totally uplifting event because everyone I met wanted to learn or share something, and that positivism is exciting and contagious.

Great Goals
What the 5MK initiative of Operation Hope is trying to accomplish is laudable: reverse the 30% nationwide high school dropout rate (the rate is from 50% to 70% in urban areas). “If we can show kids the relevance of school in building a successful future, the dropout rate will change,” Steigen notes. Other goals include starting 50,000 savings accounts for young people; securing $50 million in earned income tax credits for parents, teachers and adults; and train 25,000 HOPE Corps volunteers to teach financial literacy throughout the United States (something that should be taught to Congress, IMHO).

Educational programming consisted of Operation Hope classroom sessions, 16 of which were hosted by AIMP. We provided a glimpse of music business careers beyond being an artist. In my case, I spoke about music publishing and how I work with artists on three continents. Just that morning, one of my songs was being mixed by Matt Forger, who was the recording engineer on several Michael Jackson albums produced by Quincy Jones, which made a nice tie-in.

Making Them an Offer
In the classroom presentation, I was partnered with James Leach, VP at SESAC, and we were able to show how a song goes from writer to publisher to artist to performing rights organization like ASCAP, BMI or SESAC and from there into various income-producing situations all over the world.

At the end of our presentation, we gave each student a copy of my “Motion Potion” album of instrumentals and made them an offer: “If you create lyrics to any part of one of these songs,” I told them, “I will register the work with Golosio Publishing and James will invite you to join SESAC. That way, you will own part of a copyright on a song, have a relationship with a music publisher, and be a member of one of the world’s major performing rights organizations.”

The Big Picture
Quincy Jones points out that “We’ve spent the last 20 years making dumb sexy. At Operation Hope, we believe it is critically important that we change the cultural tide and ‘Make Smart Sexy.’ At the core of the 5 Million Kids Initiative is a national campaign to re-brand education in the minds and hearts of young people.”

The Mission
On September 29, 2009, Operation Hope officially launched this mission to reach, teach and empower 5 million kids over the next 5 years. I am intensely proud to take a small part in spreading the word about this program. It is very clear to me now that children need to see and interact with adults who serve as examples of what students can become. It took some time, but finally this “kid” gets it. To reiterate what Jones said, this is an opportunity to Make Smart Sexy.

“When children do not have role models in their communities, overwhelmingly, they think success, in all its various forms, is for someone else other than them,” Jones states. “Our kids are dropping out of high school because they are sharp observers of their environments and they model their lives after what they're exposed to.” He points out that one person can make a difference. And you might be that person.