Who Has a Better Guitar Sound – Eric Clapton (on Fresh Cream and Disraeli Gears) or Jimmy Page (on Led Zeppelin I)?

MuseWire COLUMN: This is not about who is the better guitar player, viz, Eric Clapton or Jimmy Page. Maybe the question (and their theoretical rivalry) stems from the fact that both of them were in that smokin’ slab of 1960s pop-psychedelia, the Yardbirds; or, that neither of them is quite as good as Jeff Beck.

But, in the celebrity death-match competition between Messrs. Clapton and Page, the early records from both of their respective bands frequently are cited as examples. It variously is alleged, for instance, that both Fresh Cream and Disraeli Gears sound somehow “thinner,” or “more trebly,” than Led Zeppelin I; that Cream “doesn’t have enough bass,” or that Mr. Page’s notorious studio wizardry somehow managed to concoct a guitar sound, superior to that of Mr. Clapton. To what extent is there any truth to these allegations? 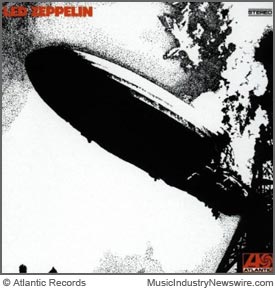 By way of qualifications, I should say that I personally witnessed performances by both Cream and Led Zep in 1968, and Led Zep on numerous occasions thereafter. I therefore speak as an aficionado of both bands, as well as 1960s British rock in general. Further, I am a guitar player with more than passing expertise in the complex elements comprising the 1960’s “British Sound,” including esoterica such as the proper way to set up a Marshall JTM45, the history of early Hiwatt amplifiers, or how dial in the right sound on a Vox AC30.

I would like to commence this inquiry – perhaps inquest, or autopsy, might be a better term – by comparing the songs, “Sunshine of Your Love,” versus “Communication Breakdown” – quite possibly, the best two songs on Disraeli Gears and Led Zeppelin I, respectively. When properly understood, this is akin to inquiring which is stronger: an ant, or a tongue. The tongue may flop about a lot, potentially squashing the ant; but, once it has attached its mandible to the tongue, there can be no question but that the ant can drag it off to the ant-hill, even under protest from the tongue. In other words, the best way to solve the alleged problem of “too much treble” on even the most discerning re-mixes of Disraeli Gears, simply is to turn up the bass. Or, au contraire, if one finds Led Zep I too bassy, simply turn up the treble. Critics to the contrary simply had sucky stereo systems.

Having said thus, the critics may have a point. Compare, for example, the introduction to “I Feel Free,” or “Spoonful,” or even “Sunshine of Your Love,” with “Strange Brew.” There is something very wrong with the way Clapton’s guitar sounds on “Strange Brew.” It is way too crisp around the edges, even “crinkly” – almost as though he’s using too much treble boost. The other two songs, though, sound much more formidable – though I still don’t have the vaguest idea what people are talking about when they mention Clapton’s mythological “woman tone.” The women I know have many different tones, none of which sound anything like Clapton playing the guitar.

The real problem has nothing to do with too much treble, or not enough bass. Rather, Cream either embraced, or felt as though they were compelled to perform, a superfluity of goofy Brighton-Beach style British-Music-Hall numbers, as part of their standard repertoire. In this category, I include duds such like “Wrapping Paper,” Four Until Late,” “Take It Back,” and “Mother’s Lament.” There is not now, nor has there ever been, a demand for these songs. In making this extraordinary category error, Cream later was joined by the band Queen, whose ribald interpretations of the same music-hall genre forever will blot the escutcheon of this otherwise-estimable band. Come to think of it, Queen’s guitarist, Brian May, can be seen sporting a knowing smile in the DVD of the recent Cream reunion performance at the Royal Albert Hall; and also was known to over-use his treble boost.

In criticizing their stupid songs, I simultaneously must acknowledge that there are some extremely good Cream “songs” that don’t disintegrate into meandering blues jams. In this category I would include numbers like “World of Pain,” “Dance the Night Away,” “We’re Going Wrong,” and “White Room.”

Maybe it was due to the strong-arm efforts of their thug-cum-gangster manager Tony Grant, but somehow, someways, Led Zep managed to resist these temptations (perhaps, “avoid these atrocities” would be a better summary). In their place, they substituted a pseudo-Celtic Bert Jansch-isch mythological gibberish, which eluded Cream, even on its best days. Page’s puissant guitar sound always had strong mid-frequency tones; it was strong, muscular, virile, aggressive, perfectly sculpted. And, in the category of aimless noodling, I would much rather hear “You Shook Me” or “I Can’t Quit You Baby” than “Sleepy Time Time” or “Blue Condition,” any day of the week.

From Cream’s perspective, the simple fact of the matter is that their recent reunion concert at the Royal Albert Hall was an order of magnitude better than anything the band possibly could have produced during their hey-day. It was everything I wished the band could have been back then, even with respect to the “pop” numbers that reportedly so embarrassed them. They performed all of their songs with aplomb and good humor, even hoary chestnuts like “Pressed Rat and Warthog,” which Ginger Baker dutifully (if somewhat drolly) recited (lyric sheet clearly visible in over-the-head shot). And then went on to remind the attendees to purchase t-shirts upon exiting.

The final verdict: Page probably did have the better sound, and on the whole Led Zeppelin I is superior to a combination of Fresh Cream and Disraeli Gears. Cream, however, better embodies the zeitgeist of the swingin’ 60’s, and better iterates the spirit of the psychedelic era. Led Zep definitely is more “70s” than “60s,” at which time Mr. Clapton was engaged in pointless Stratocaster-ish dithering with Delaney & Bonnie. Led Zep managed to avoid the pop trifles, and, by and large, Cream’s hokey blues numbers were nowhere near as good as Led Zep’s interpretations of the same genre. So they both were pretty good, OK?

Article is Copr. © 2012 by David Kronemyer and originally published on MusicIndustryNewswire-dot-com before the site was revamped as MuseWire.com in March 2015 – all commercial and reprint rights reserved.