Who-do Review: Doctor Who ‘The Bells of Saint John’

REVIEW: Having grown up with Doctor Who in the ’70s here in California, where the local PBS stations would run the program on weekends, I’ve thoroughly enjoyed all of the “new Who” series (SERIES 1 to 7), and while it took me awhile to warm up to Matt Smith’s incarnation, I believe he’s now fully “inhabited” the role of the immortal Time Lord, aka “The Doctor.”

In his latest outing, launching part 2 of Series 7, “The Bells of Saint John,” we more or less pick up after the most recent holiday special, “The Snowmen” which also serves as a mid-season 7 “bridge” between the leaving of Amy and Rory, and his new companion, Clara.

The story for Season 7, Episode 6, opens with the Doctor in a monastery in the 1700s, where he is holed up, as it were, painting pictures of the mysterious girl Clara he keeps running into and being unable to save (first in S7:EP1, “Asylum of the Daleks” and then in “The Snowmen”). Out of the blue (pun intended), the phone in his police box starts ringing (the titular bells), which should be impossible, and the call is from the very girl he’s mentally and emotionally whinging on about in his hideaway. And she needs tech support.

At the same time, all over London, and the planet, people are disappearing from themselves. “Where am I?” One person posts a video from nowhere to beware of strange symbols on your Wi-Fi connection, admonishing viewers “do not click on them, or you’ll be taken.” This plays on the fears of abduction, of ghosts in the machine, and technology self-expanding beyond our ability to monitor, or manage. Maybe Mom wasn’t daft to put off connecting her Wi-Fi router to her DSL all these months? It seems something “out there” in the cloud wants brains, and we’re not talking your typical zombies, but an “evil” that needs human cognitive capacities to add to its own intelligence. 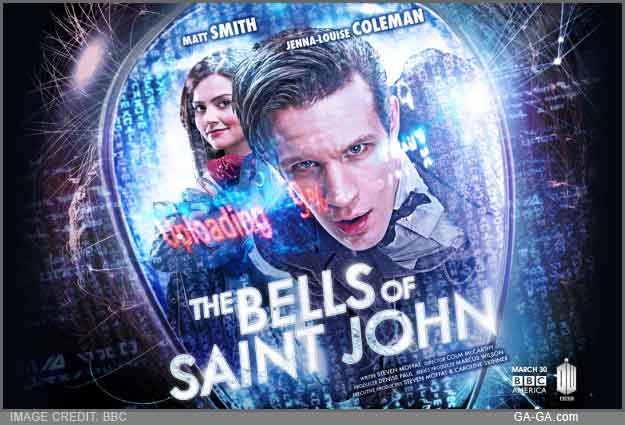 Without repeating a blow by blow of the plot, the main points surround The Intelligence (from “Snowmen”) hacking various folk to download and devour — or siphon something from — human intelligences for some mysterious purpose; which on the surface seems about control, but suggests a more sinister long-term agenda. This is done by downloading people over their Wi-Fi connection using some unclear combination of science and mysticism through those special symbols which appear on the user’s net-connected mobile device, and some of the “lost people” are warning others online about.

The Doctor’s new companion, played by Jenna-Louise Coleman, is both perky, smart, and flirty with the Doctor, which is fun to watch as the Doctor seems both taken aback and also intrigued by her. I think this chemistry is very good, and in some ways better than with the lovely Amelia Pond played by Karen Gillan. While Pond was flirty in a deeper love sort of way, the Doctor always viewed her as that little girl he shared fish fingers and custard with, and saved from the crack in the wall. For Amy, the Doctor was the raggedy Doctor, her fuzzy knight in shining police box, but not a potential mate. With Clara Oswald, the Doctor has in many ways met his match.

Initially I was worried this would be an awful revisit of many horrible genre ideas of the past — “VR is Real” comes to mind — but in typical Whovian style there is a mix of “things living in the Wi-Fi” which plays to writer-producer Stephan Moffet’s strengths of both spooky and quirky, and walking access-points which can mimic your psychic thoughts to become a friendly or imagined person to steal your soul. People are disappearing from their bodies, being snatched up, to populate a human-powered network where each “node” can be controlled, enhanced, or dispatched permanently.

There is some lack of clarity as to how some people are in the evil cloud, and unattached from their bodies, and how other bodies are being controlled without the interaction of their personality, but then their personality is still there. This implies two levels of control, where both an entire person’s “being” is snatched and integrated into a neural network, while others are merely “hacked” and can be fully controlled without knowing they have been compromised. Obviously this is not your mother’s DSL connection, but an alien-tech capable interference beyond anything cyber security experts might be able to firewall.

Luckily the Doctor arrives at Clara’s doorstep to follow up on the phone call he should not have been able to receive, in time to introduce himself all over again for the third time, very shortly before Clara is captured by a portable uplink that resembles a storybook character. The Doctor manages to save her and download her back from the evil network datacenter, and warn the operators on the other end that Clara is “under his protection.” Which, as any fan will know, applies not just to the young woman, but humanity in general. 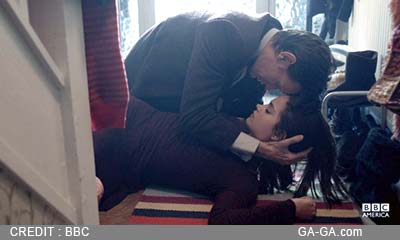 There is a very tender moment where he holds her as she is brought back into her body, and he puts her to bed, and lays out some Jammie Dodgers (cookies), and looks through her story books and inspects a leaf she’s used as a placeholder.

What is not revealed is how the phone rang in the front of his Tardis’ call box chameleon circuit; which should not be possible. This suggests a third party influencing events in some way connecting him repeatedly with Clara, without his in-the-moment participation. Perhaps his future self back-porting warnings, or an unseen force yet to be revealed.

Moffat has come up with a nice twist on the companions, with a girl who is the same person, but not the same “person.” Perhaps a clone? Perhaps something else. Two of her three personalities thus far have involved some kind of transformation of her from “just a girl” to an enhanced person, either through connecting to the Wi-Fi in this episode, or the woman trapped in the body of a Dalek, while her mind refused to let go of her humanity. Will this third companion also die, and will there be another? Presumably this third incarnation is the one who will now travel with him, but knowing Moffat’s style, one can perceive that her end will also not be perhaps the kindest end, with an afterword of rescue or resurrection that defines and explains the paradoxes seen thus far.

I was happy to see them zooming around London, and steering clear of the quarry or the small town/hamlets for a bit. Great to see location shoots as the UK has always been “home” to the Doctor, and it’s great to see a bit of it as it puts it into the “real world.”

Going vertical! After Clara gets uploaded a second time, I loved the Doctor’s anti-grav motorcycle which was a great way to get up the side of a building in security lock-down mode. Crazy stuff, but the kind of fun you expect from Who, and which was less likely to happen in the prior couple of seasons due to the budget restraints. I also truly love the new Tardis interior. The clock-like gears with Gallifreyan language at the top remind me a little bit of Stargate, but a really lovely set-piece to show the Tardis “spinning up” and moving on without the classic up and down drilling system in the center console. 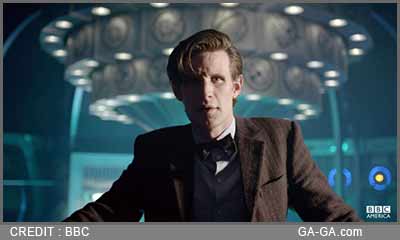 There are some wonderful bits of dialogue I won’t spoil for you here, but I’ve always enjoyed Moffat’s writing. I particularly liked the byplay between the datacenter manager (herself fully hacked), and the Doctor after he breaks into her office.

As expected the Doctor manages to save the day and return the “disappeared” to their bodies, including Clara. And he invites her to come travelling with him. In his “snog box” as she calls it. She tells him to return tomorrow and she’ll think about it. Good ol’ UNIT comes in to mop up the datacenter folk, who themselves get “unplugged” just as they’re about to get detained and questioned about their activities. The manager has been “whispered to” all her life by The Intelligence, and reverts to the mindset of a little girl. How long has this been going on? Perhaps since the events in “Snowmen,” which would imply a major foothold has taken place of which the Doctor is unawares.

While the Doctor has closed down one dodgy datacenter, it doesn’t imply he shut them all down, only closed one location in a possible franchise of human control.

The interesting sub-text to the story, wrapped in a fun adventure tale, is the concept of “losing one’s self in the un-human connected cloud.” Moffat plays on fears of losing yourself to social media, and no longer have social real-world connections. Spooky whispers to people who can’t hear you, while others hear your meandering thoughts about your breakfast trips, or lack of a love life. Becoming too-connected may make you “fully connected” and no longer in control of your own actions. Perhaps leaving the world behind to be part of a network of other memes and ideas, but no longer aware of your bodily surroundings.

How much time did you spend on social media today? Was that your choice, or is somebody else making you do so. Did you really want to share that cute cat photo, or did something make you do that? Hmmm.

Moffat loves spooky, and so do I, and so I enjoyed this episode, “The Bells of Saint John,” and can’t wait for next week as the wrapper continues to come off the Jammie goodness.

Article is Copr. © 2013 by Christopher Laird Simmons – all commercial and reprint rights reserved. Originally published on Ga-Ga.com. Images courtesy and © the BBC/BBC America. Lovingly written in “first draft mode,” and not revised or tuned for absolute perfection. Enjoy!