Recently I found myself bemoaning the lack of walk-through “here are some demo patches” videos for a number of synths, keyboards and other music gear I own, so the obvious thing to do was start doing them myself and stop whining about it. So, with a new Nikon DSLR with HD video capability in hand, I thought I would start off this video review series with a fairly rare beast known as the John Bowen SOLARIS. 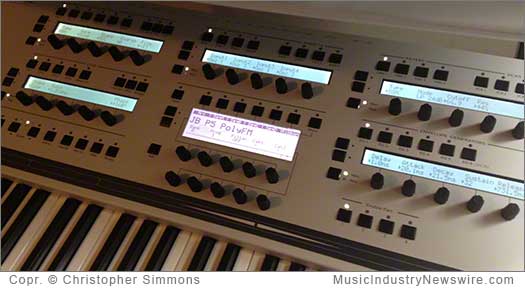 The road to reality for Mr. Bowen’s electronic keyboard instrument has been a somewhat long and torturous one. I ordered my unit in fall 2008, and got in spring 2012. Much like the folks who pre-ordered something esoteric like a Fisker electric car, or hand-built furniture, there is a mix of technical hurdles, technology issues, and a vast array of manufacturing hurdles. As they say, the devil is in the details.

I won’t reiterate John’s storied history in working at Sequential Circuits on the original Prophet synths, at Korg on the Wavestation, or his various projects with the Scope platform, as you can read his back-story on his site (http://johnbowen.com/). But today, let’s talk about the Solaris.

Mine is a white one, from the first batch of 100, and I believe my serial number is 0039, if that matters to you at all. It also comes in black. The first 100 have “limited edition” on the top right of the case front. Some have lighted wheels (I ordered the option, but it shipped without it installed due to lack of manufacturing oversight; but I got the kit from John after the fact). Some folks later on might get aluminum end caps as an option over wood.

So what do I think. Overall pretty impressed. Of course, as I expected once I had the white one, I wanted the black one. First off, the sound is pretty amazing – when you listen to the purity of the sound, running at 96kHz, you can’t help but notice it sounds more “real” than any virtual analog you’ve used before, and does sound about as close to analog as I’ve yet come across (and I own probably 50 synths and keyboards here). The displays on top do remind my of my Oberheim Matrix 12, giving you tactile feedback to the elements of sound brought up with each patch.

The first bank is made up of sounds programmed by John Bowen (“JB”) and include some great classic sounds from the Prophet, an example using wavetables, and some beautiful “rotor” effects, which will be a “signature” sound for the Solaris. The second and third banks are made up of patches from early users who had the development units to play with. (This first video will focus on the Bank One sounds; technically “bank zero,” actually.)

The Solaris has very high quality modeled emulations of classic SCI Prophet 5 (version 1 and 3, I believe), the classic Curtis music (CEM) sound of the Oberheim, Prophet VS waves, and some wavetables courtesy of Waldorf; it can also load .wav format samples. (See John’s website for full technical specs.)

The front panel has numerous back lit displays, buttons, knobs, a joystick, pitch/mod wheels, ribbon controller strip, and a 61-key velocity and aftertouch capable keyboard. As with most modern synths it doesn’t do poly-aftertouch from its own keybed, but can respond to an external keyboard that sends Poly-AT. The bank panel has MIDI in/out/thru, multiple analog 1/4-inch outs, and coax SPDIF; plus pedal inputs. (No pedals were used with the two video demos.)

But, let me jump right into the video, and let you hear PART ONE of this series:

Update to audio in the above video: Correction from JB: “Presets are automatically selected when you use the Inc/Dec buttons – you don’t need to press Enter for those! Only if you use the dial or keypad to select do you need to press Enter.” Also, bank one referred to in video, is actually “bank 0” – and there are 3 additional factory banks; 1, 2, 3.

And here is video #2 – with direct audio from the Solaris’ outputs – not auditioning for a talent show here, just whackin’ some keys to get through sound banks as quick as possible due to 20 min. limit on video with my Nikon DSLR: (NOTE: UPDATED 7.17.12 3pm PDT to reduce the hum/noise introduced by the Nikon which was only thing in studio not properly grounded… “doh!”)