MuseWire COLUMN: Joke book or important guide to the music industry? Author and compiler Jeffrey Weber believes it is both. One thing is certain: you will laugh, wince, howl, grimace, and laugh some more. 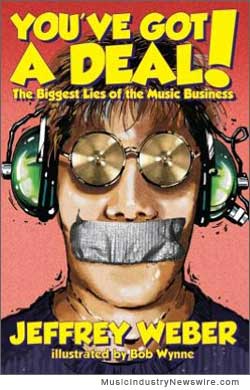 Two musicians walk into a bar. One doesn’t order a drink. Hey, it could happen.

If you smiled, this book (“You’ve Got a Deal: The Biggest Lies of the Music Business”) is for you. Actually, even if you didn’t find it funny, you can learn a lot about musicians and the music business by reading this volume of jokes, tales, stories, puns, one-liners, and sarcastic observations.

No doubt some people will read these pages and shriek with the kind of laughter that comes from recognition. Others will enjoy plenty of LOL moments but think that “the biz” can’t possibly be as horrific as presented here. But in a brief conversation with the author, Weber told me that the music industry is “actually much worse than what is in the book. Every one of my colleagues who has read it has told me at least one story that goes even further than what I’ve written.”

As Weber notes at the start of the work:

Naturally, Weber includes the most famous comment on the topic, the one by gonzo journalist Hunter S. Thompson: “The music business is a cruel and shallow money trench, a long plastic hallway where thieves and pimps run free, and good men die like dogs. There’s also a negative side.”

While you might be tempted to say Jeffrey Weber’s paperback opus is “cynical,” I think that “realistic” is closer to the truth. In any case, it’s damn funny.

With a three-decade career in music, he has produced tracks or full albums for an incredible array of artists: From Ronnie Dio to Pat Boone. From MC Lyte to David Crosby. From Jackson Browne to the Count Basie Orchestra. From Nancy Wilson to Ritchie Blackmore. From Etta James to the Utah Symphony.

In addition to provoking guffaws, chuckles, giggles, and hoots of laughter, Weber feels that the book can help up-and-coming musicians prepare for some of the problems, challenges, difficulties, roadblocks, and speed-bumps they are likely to encounter along the way. In reality, You’ve Got a Deal! is an instruction manual disguised as a joke book.

The opening section on “Biggest Record Company Lies” is somewhat balanced with the section on “Biggest Musician and Singer Lies.” Well, perhaps “balanced” is not the proper word because the record company lies will keep you poor while the musician and singer lies can be countered by insisting they hit the right notes and refrain from the substance abuse.

Weber points out that many entries in the book are verbatim reports of actual conversations or business correspondence. As with this record company executive’s reply to an attorney’s request for fairness in a recording contract: “I’ll be Goddamned before I’ll commit to being equitable!”

There are some jokes requiring at least some knowledge of the situations, personalities, and job descriptions within the business. Such as when the record label A&R guy is asked his opinion of a new song and he says “I don’t know — I’m the only one who’s heard it.” Or this observation: “There is a very fine line between ‘arranging’ and ‘mental illness’.”

The rewrite of the 23rd Psalm from the perspective of the rhythm section is blasphemous but delightful: “The Lord is my drummer, I shall not rush. . . .”

Some of the jokes are miniature album reviews or critical analyses of people’s careers: “What do a cup of coffee and Eric Clapton have in common? The both suck without Cream.”

Some anecdotes are helpful for fathers of daughters who date musicians: “What do you say to a drummer in a three-piece suit? Will the defendant please rise.”

There is also an amorous short story that is hysterically entertaining because the profanity and anatomical references have been replaced by the names of jazz musicians: “It was a balmy night out and I was feeling thelonious. I hadn’t had any tatum in so long. . . .”

Light bulb jokes, tone-deaf jokes, and musicians playing out-of-tempo jokes abound. Some are funnier than others, but the book seemed free of any real groaners. And sometimes Weber got me to choke on my coffee as a laugh line crept up on me. One such example was his special feature on imagined Jewish Country-Western song titles, which contains this gem:

“Mamas Don’t Let Your Ungrateful Sons Grow Up to Be Cowboys (When They Could Very Easily Have Just Taken Over the Family Hardware Business that My Own Grandfather Broke His Back to Start and My Father Built Up Over Years of Effort Which Apparently Doesn’t Mean Anything Now That You’re Turning Your Back on Such a Gift!)”

Because one of my current jobs is editing the “DictionaryTomorrow” project, I was especially interested in his Glossary of Terms at the end of the book. Here are a few of the ones that made me smile:

Agent: A character who resents performers getting 90% of his salary.

Modulation: “Nothing is bad in modulation.”

Movie composer: Someone who can write like anyone except himself.

Plague: A collective noun, as in “a plague of conductors.”

Transsectional: An alto who moves to the soprano section.

Vibrato: Used by singers to hide the fact that they are on the wrong pitch.

Weber is donating a portion of the proceeds from book sales to two organizations. The first is Reader to Reader (www.readertoreader.org), a non-profit group which distributes books to school and public libraries in the poorest communities. The second is MusiCares (www.grammy.org/musicares) which provides financial assistance to those in need within the music community.

Musicians, producers, songwriters, and others in the industry are invited to participate in further editions of the book. Weber and his publisher “are looking for more great lies, stories, song titles, jokes, definitions” and more. Don’t know how long Weber will maintain this incredible accessibility, but he prints his e-mail in the book: it’s WeberWorks@earthlink.net but please just contact him with serious comments, okay? In other words, don’t you be a joke.

Finally, I’d like to quote one of his most intriguing observations:

There apparently exists, somewhere in Los Angeles, a computer that generates music for television dramas. When TV composers need a new dramatic cue, they turn on this computer; after sorting through millions of possible musical themes, it spits out “ONE LONG LOW SCARY NOTE ON A SYNTHESIZER,” and this becomes the cue. The next time they need a cue, the computer spits out “TWO LONG SCARY NOTES ON A SYNTHESIZER.” And so on, ad infinitum. We need to locate this computer and destroy it with hammers — along with TV producers and entertainment lawyers.

For that item alone: Jeffrey Weber, a grateful nation salutes you.

You’ve Got a Deal: The Biggest Lies of the Music Business by Jeffrey Weber, illustrated by Bob Wynne

Article is Copr. © 2012 by John Scott G, and originally published on MusicIndustryNewswire-dot-com before the site was revamped as MuseWire.com in March 2015 – all commercial and reprint rights reserved.