MuseWire REVIEW: Yes, OK, it took him a long time to get them done, and some people still haven’t gotten theirs from the initial production run. I am pleased to advise, though, that it is well worth the wait. Ours arrived from Europe in good order with sturdy packaging, nothing to be worried about as far as shipment is concerned. I understand from John some people were concerned about shipping cost but hey, what do you expect? None of this stuff travels for free. 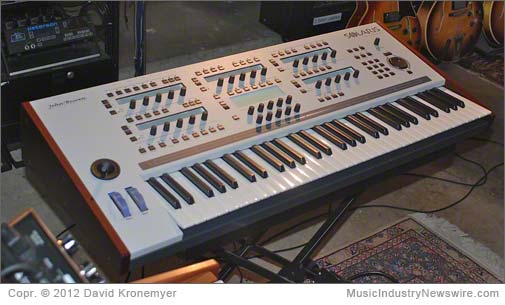 My initial impression on unpacking was that the cosmetics look great, no inconsistencies in panel coloration (ours is white) or stenciling, the wood sides were firmly applied, nothing rattling around loose inside (you’d be surprised at how often this disconcerting problem occurs). Power is an external in-line transformer, which works for me, I have made a specialty of trying to isolate power supplies from sensitive internal electronic components, it makes no sense to try and jumble two essentially incompatible functions inside of one box.

On power-up the LED displays were nice and bright, with a pleasing dark-grey on bluish-grey color scheme; the “main screen” in the center has a slightly different backdrop. Essentially a computer, the Solaris boots up quickly; much faster than the Hartmann Neuron, which always leaves me with the disquieting impression it will fail when turned on. No discernible fan noises, hums or other irregular sonic fluctuations emanated from the machine. Some of this might be due to our complex but extremely effective grounding/transformer-wiring scheme, but the noise floor was quite low even bypassing it, an outcome confirmed by using test equipment. The knobs and switches felt firm and determinate, a pleasing tactile sensation; hard as it is to believe, the controls of many synths actually wobble (unintentionally) between one’s fingers.

One of the most interesting features of the Solaris is that all of the sounds are stored on a compact flash card. The same one that you can stuff into a reader to communicate with your computer. Thus, in principle, sounds can be archived on disc. Or, if you feel like dropping by your friend’s house with some cool new ones, just take the compact flash card with you (assuming said friend has a Solaris, of course). The compact flash card supplied comes preloaded with 62 sounds in bank 0 labeled JB (which I assume stands for John Bowen); 127 in bank 1 labeled MP; 90 in bank 2 labeled CL; and 90 in bank 3 labeled SH (I apologize for not knowing the respective attributions behind these initials). These sound pretty good; I particularly was impressed with some of the Moog lead emulations in bank 0. The logical architecture of compact flash cards makes it possible to “glitch” the sounds, once loaded, between various notes. By this I mean that with fast technique one can force the synth to transition between notes at a speed exceeding its capacity to respond, which results in fragments of notes, partial notes and stuttery transitions between notes. When coupled with pressure-sensitivity (the Solaris has this feature), one can devise some extremely interesting sonic outcomes, which never could be created on the original instrument(s).

The Solaris’ real potential lies, though, in two additional domains. First, its versatility. Five separate smaller screens supply complete control and assignability over every imaginable parameter of oscillator, LFO, mixer/FX, filter/VCA and EG. The layout of these functions from left to right is particularly intuitive. I make a practice of never consulting a manual unless I have a specific question, and then much later after we have had the synth for a while, the better to discern whether its operation is instinctive or awkward. It was easy to figure out what to do and how to modify a sound and either save it to the compact flash card, or simply manipulate it in real time (such as with a filter or modulation source).

Second, the compact flash card beckons intriguingly. Speaking strictly for our organization, we have hundreds of sampling discs left over from the days of the Akai S1100, the EMU 4XT Ultra, the Kurzweil K2000RS/K2500RS/K2600RS, the Roland S-760, etc. From companies like Hollywood Edge, Sound Ideas, Voice Spectral, Best Service, East*West, Time+Space, ILIO, Zero-G, Pros?nus, MasterBits and Sonic Implants, reading off the spines of some CDs. Not forgetting the proprietary formats and libraries associated with each of the above-mentioned samplers, and TEAC’s bold but failed GigaSampler format. I still enjoy palpitating hardware samplers, because (among other reasons) they sound good and I’m reasonably facile at doing so (this due solely to rote practice since their release, not to any special abilities). Of course these samplers now are available on EB for a fraction of their initial price, but that’s progress for you. It takes a variety of disc drives, zip drives and hard drives to get sounds into these obsolete beasts. Now, though, what we have done is loaded a lot of the samples we like and use frequently into Logic (which, through EXS24, also can translate proprietary formats), whereupon one can slice and dice them to one’s heart’s content.

The point of this excursus is that it would be swell to be able to load some of these samples onto a compact flash card and then be able to play them on the Solaris. The Solaris itself is not a sampler. It is, however, able (in principle) to read files one has sampled and then loaded onto compact flash. When I talked with John about this, he said this was completely feasible. All that’s needed is a utility program to parse out the sample file into a mysterious hierarchal format that I don’t understand. I know a lot about how to use these devices, interconnect them, make music with them, and I’m reasonably good with a soldering iron. But I encounter nothing but a vast field of low-lying brain fog when I start to hear about hierarchal memory structures.

So, I hope somebody writes a simple, easily useable utility program to do this. One designed for ordinary stupid musicians, not computer whizzes. John told me that Bernard Wong and Ken Elhardt – both design geniuses as far as I am concerned (as is John, of course) – are busy working on this. Ken also is working on, or has completed, additional sounds for bank 4. Assuming this project comes to fruition, then my chimerical but strangely compelling vision of using Logic-edited samples of anything under the sun, loaded into Solaris via compact flash, takes a step towards practical, operationalized implementation.

Kind of like a more easily usable Mellotron, n’est-ce pas? Of course the new Memotron rack (a kind of Mellotron-in-a-box) from Manikin Electronic, which also uses compact flash, looks pretty darn good, too. And, a new Eurorack module made by ADDAC Systems uses control voltage to trigger .wav files stored on compact flash, which presents a host of mind-expanding possibilities. 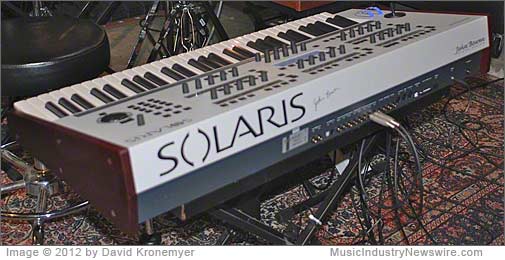 It is with reluctance we have been deaccessioning some of our larger keyboard synths, or even smaller ones that duplicate functions found in rack-mountable ROMpler modules, simply due to lack of space. Recently we lost our lease on the large studio building where we had been tenants for many years; the owner said he was going to turn it into “lofts.” What is a loft, you might ask? Fact of the matter is that it’s a kind of yuppie condo without walls. That way the owner can sell them for just as much as a condo with walls, but save the expense of actually having any.

We will miss the old space, which we had maximized for ultimate creativity. We also will miss its collection of tools to realize sonic outcomes never before heard except possibly elsewhere in the multiverse space-time continuum of the many-worlds interpretation of quantum mechanics. Being in a smaller space, though, introduces a kind of aesthetic discipline, because it forces one to make choices. Like The Clash sang, “should I stay or should I go?” (in this case, applied to synths). We made the decision to offload almost all keyboard synths; about half of our supply of ROMplers; but retain and expand most of our modulars, mainly because they still intrigue and also because of the new population of Eurorack modules, which quickly are becoming the de facto standard. Many new ways to manipulate control voltage, many new filters and modulation sources – always a good thing.

From present vantage point, it looks like the only keyboards we’re retaining will be an Alesis Andromeda A6; a Hartmann Neuron; a Moog Voyager; and the Solaris. Plus of course keyboard-only controllers for our Moog system, the ARP 2500 and 2600, an Analogue Systems French Connection for the Euros, and a few others that presently escape my mind. Plus a variety of miniature or limited-function keyboards for the intriguing and powerful new generation of mini-synth modules such as the Dave Smith Evolver/Tetra/Mopho, the AdrenaLinn I/II/III, the Waldorf Blofeld, the new Moog Minotaur, and others. Plus some sequencers and such. Truthfully I can’t remember what’s here and what isn’t, but my point is that as far as large keyboards with sounds living inside of them are concerned, the Solaris is one I can see us using for many years to come.

I earnestly and sincerely congratulate John for sticking with this project, seeing it through to fruition (despite delays and daunting economics), and making a great and innovative instrument.

To learn more about the Solaris, please visit: http://johnbowen.com/ .

Article is Copr. © 2012 by David Kronemyer and originally published on MusicIndustryNewswire-dot-com before the site was revamped as MuseWire.com in March 2015 – all commercial rights reserved. Images by and © David Kronemyer, used by permission.