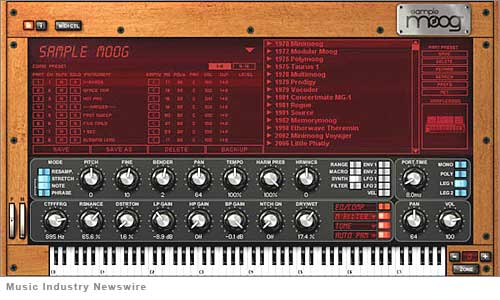 REVIEW: I’ve been a fan of the late (and sadly missed) Bob Moog’s various sound creation inventions since the mid 1970s. I first saw one of his theremins at a Southern California museum and while the rest of my family perused the other modern art; I spent most of the day at the theremin making other-worldly tones with a wave of my hands. This led to a very short batch of piano lessons, from a family friend, but those lasted only a couple of weeks since he moved his family to a commune in Oregon. During this time I learned about other keyboards, and the nascent synthesizers being built at that time by Mr. Moog (pronounced like rogue, NOT like a cow mooing).

I was intrigued by Isao Tomita’s album “Snowflakes are Dancing,” played with Moog gear, which my mother had bought (my parent’s musical tastes were a bit eclectic), and the soundtrack by Jerry Goldsmith for the film Logan’s Run which I saw in super-surround at the Los Angeles Cinerama dome on its premiere. 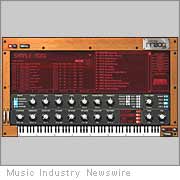 In 1975 (at age 13), I got to play with a Minitmoog for a week, and even though I was asking my parental units for photography gear to pursue my interests in the creative arts, they gave me a choice of the Moog (owned by a business associate who wanted to sell the small keyboard), or a 35mm SLR. I chose the Fujica ST701 camera, bought at a Long Beach pawn shop.

It was years later before I got back into synthesizers, but played a family two-tier organ for many years. The first synth I ever purchased brand new was a Sequential Circuits Pro One the week they were released. Dozens of keyboards later, stints in bands, some pro soundtrack work, and the usual, I finally got a cheap Concertmate Moog from Radio Shack, and a couple of years ago finally got a Moog Voyager. I’ve owned four Moogs personally, and played many others.

So, I was pretty interested to see the new virtual synth from IK Multimedia, which takes on the Moog and creates something of a “living museum” of arguably the best sounds from the history of instruments to bear Bob’s name (even he didn’t design some of them), would play. And, the theremin of my youth (ahem, 30+ years ago) is even one of the instruments to be included. IK wisely chose to sample the instruments, and then put these samples into what looks to be a re-skinned version of their SampleTank LE product.

Inside the box there’s two install discs, a nice-sized manual (kudos for including something us dinosaurs can read while watching 60 Minutes and not have to suffer through some illiterate web pages, YouTube videos or endless PDF tutorials to get started!) and registration card. The install is simple, and I actually appreciated having a separate installer on each disc for those sample folders, versus one giant multi-disc install. I’ve had a few problems with those 5-disc installs, where something goes wrong (are you listening Native Instruments?) on one of the discs, or something is missing, and it takes a second try, or skipping the missing data to get to the launch screen.

The layout is similar to other IK instruments, as you would expect, except there are vintage looking knobs across the bottom which give you a “feel” of a classic analog, without attempting to fully recreate any specific synth interface (see the included screen shot image). For example, rather than having all the knobs visible, you toggle to different groups for things like ENV1 (envelope 1, a nice AHDSR setup), or ENV2, filter controls, LFO1 and 2, velocity, key range, and sample engine options (normal sample engine, or STRETCH engine which allows some resynthesis options to mess with the sound a bit more than possible using typical sample playback and filtering).

It’s a nice mix of “simple” with some added features to go deep if you want to. So, while it’s not a virtual “emulation” of any one instrument, it does provide some features to modify, mix, and make your own patches from the included sample elements.

An included multi-effects unit provides 32 effects, with four effects slots. I was very happy to see a classic spring reverb, as my first mixer from Peavey had that, as well as my keyboard amp which had a “Marlboro sound blender” with spring reverb and delay. Vintage all the way. Typical DSP FX include reverb, ambience, delay, filters, wah, chorus, phaser, flanger, panning, tremolo, distortion, phonograph, crusher, and even some guitar cabinet and amp modeling. While these may seem like a bit out there for a keyboard sample player, or some garden variety DSP FX module re-purposed from another plug-in, the reality is that back in the ’70s and ’80s, the Moog was actually run through guitar amps, vocal boxes, stomp boxes, and other gear to make the electronic instrument sound weirder, bigger, wider, or just plain distorted since electronic keyboards did not contain any built-in effects in those days before DSP chips.

Ironically, when I first launched the SampleMoog, I was a little disappointed that the standard Minimoog patches all seemed to be “stereoized” when the original instrument was mono (not stereo). Since I own a Voyager and run the output in mono, the patches didn’t sound right, until my brain caught up and remembered that almost everybody runs the thing through either a stereo chorus, and/or delay pedal. Ahem, including me. So, when you listen to many of those old records with a Moog lead, it’s usually running through a chorus with comb filter to fatten it up to stereo, and a delay to create the echo-tail and thickening. So, after I started to go through the sounds, I got it.

IK and their sister company, Sonic Reality, have done a good job of creating “playable” sounds, and then very interesting multis/combis to give you a “produced” instrument sound — which is more like what you’d hear from a famous Moog artist, than what you would hear noodling with the actual keyboard at your local music store. However, you do have access to the original samples as patch elements, and you can easily switch from stereo, to mono, to spot-on legato modes of any main patch.

The manual includes a paragraph on each for historical purposes, but when using the virtual instrument your only feedback to which instrument you’re using is a tiny red outline icon mid right on-screen (similar to what is found in other virtual instruments like Arturia’s Analog Factory). I would have preferred something larger, perhaps in color for the nostalgic sense of using sounds from the vintage instrument, but since this instrument appears based on the SampleTank layout, there isn’t a lot of room for customization of the layout. In fact, this is my only real complaint with either the standalone or plug-in versions, is the lack of ability to change the interface; specifically the colors. Much like SampleTank, this instrument uses the “company colors” of LED-like red-on-black, which looks cool, but is generally difficult to read on a 15-inch LCD and for anybody having some aging eyes, color/contrast vision problems, and the like. Being able to switch the background color to white-on-black, or the snazzy black-on-blue of their SonikSynth instrument, or the yellow-on-black of the SampleTron, would seem to be a much-needed feature for all of IK’s standalone products.

In fact, I found out earlier this year when I was originally going to review this product that I had cataracts (congenital, which kicked in when I hit 40), I was unable to read the screen very well at all, and the screens in the manual were big black/grey blobs. Even after surgery and having my eyes back to 20/20, the elements are not as easy to read as they could be. Adding a color toggle to the right of the MIDI control button at top left would be a much welcome feature.

Regardless of that minor issue (unless you’re going blind), this collection is like a mini-museum of sounds that capture the flavor of Bob’s legacy at a fraction of the cost of buying even one of the actual instruments. For most musicians, there is no need to have the “actual” keyboards to put that famous Moog sound into the mix, thanks to SampleMoog. With over 1,700 sounds, and some really nice options to make the sounds your own beyond simple attack-decay filters, this is a pretty neat package. And, while I love some of the emulation instruments on the market, the benefit of “sampled” instruments is that you’re hearing the real Moog filter, not a recreation, and that unique combination of electricity running through wires and Bob’s circuit design is what makes the Moog instruments stand out, remain viable and highly desirable today.

Adding to its street cred, the product was developed in cooperation with Moog Music, and so it’s not a typical sample library with suggestive names like “mog lead” or “classic 70s.”

I can highly recommend this product to anybody who loves the sound, even if they already own a Moog or two (as I do), because the choices made in instruments and sounds to include is spot-on. The FX and filter controls give you tweaking power over the core elements of the products’ sound, without having to worry about the reliability (or lack thereof) of vintage hardware. SampleMoog is also perhaps a better choice for those who want a wider palette of Moog juicy goodness than some of the emulations of Moog instruments on the market, since the difference in sound between the various models is sometimes very notable (take the Memorymoog, the Taurus pedal, and the Little Phatty, for example). Since the Memorymoog sounded more like an Oberheim than some other Moogs, when you layer that with the Taurus you get some really really cool things happening in your ears. If you want a Moog and can’t afford the current hardware keyboards available from Moog Music, then this is a no-brainer. All in all, a first class product and a nice combination of features to appeal to the widest range of musicians.

Available most everywhere that sells music software, for $269-$329, depending on cross grade, or street pricing. (See the IK website for cross-grade information.)

Disclosure: a free NFR review copy of the software was provided to the author of this article.