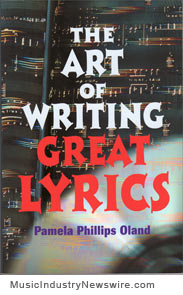 First, she has the idea that a friendly attitude and a tell-all technique will help even a novice writer become better. Second, she admits that she herself made the journey from just pushing words around to placing words in the right place for maximum effect. And what terrific accomplishments she has enjoyed, writing songs recorded by everyone from Frank Sinatra, Aretha Franklin and Whitney Houston to Selena, Anne Murray and The Jacksons. Not to mention Evelyn ‘Champagne’ King and a host of terrific singers whose names are recognized within the industry if not so much by the general public. In addition, her songs have appeared in such motion pictures and television shows as “Xena,” “The Sopranos,” “Coming to America,” “102 Dalmations” and “Logan’s Run.”

You can get a feel for Oland’s approach just by checking some of the chapter headings. My favorite one is: “Rewrite? Moi?” which gets you in the right mood for some straight talk on a topic that is a really big deal: that nose-to-the-grindstone part of the business.

But there are other excellent chapter titles. For example, “Songwriting is a Love Affair with Words,” in which she does every music lover a tremendous service by explaining how and why song lyrics are not the same as poetry. She also shows how the use of the right words can free up your thinking as well as your writing, which in turn can expand the images in the mind of someone listening to your song:

EXCERPT
If the only word we were taught as children to describe a large object was “big,” then we would use big for big girl, big train, big bug, big universe. And maybe they all are big, but not the same kind of big. By using the thesaurus, I came up with the following replacement words: blowsy woman, colossal train, enormous bug, infinite universe. Now we get a more precise mental picture of the concept we are trying to describe. We have shaded the meaning of each noun by using an adjective that more particularly describes it.

Another nice heading in her book is “The Great Aha!” This chapter contains tips, ideas and even tricks you can play to boost you writing skill and output. It also has a few words on opening the doors of perception. Note: her thoughts on this subject manage somehow to be both lofty yet down-to-earth at the same time.

The craft of writing is mentioned several times, despite the use of the word Art in the book title. To that end, Oland includes lyric-writing exercises, practice songwriting sessions, practical illustrations, examples of song-crafting decisions (both good and bad), writers’ checklists, and literally dozens of lyric examples of full songs. There is also a lot of advice on how to balance the creative side of songwriting with the business side.

How about sample lyric sheets and sample cover letters? Yup, you’ll find them here. And what about songwriter organizations or a suggested reading list of other great books for songwriters? Yes and yes.

I confess that I did not want to admire this book quite this much. Something inside of me was resisting the lessons. But that changed as each chapter flowed by. There is warmth and humanity behind Oland’s words.

EXCERPT
I write songs for the challenge of seeing something develop out of nothing. It’s the real sorcerer’s trick, much more satisfying than seeing a rabbit emerge from an empty hat. It’s pulling words, ideas, concepts, clever phrases, and statements out of thin air. When your quest for originality taps into that mysterious and unknown core of your subconscious mind, you discover a way of looking at life and the world around you out of entirely different eyes.

Pamela Oland’s “The Art of Writing Great Lyrics” is not only an excellent resource for songwriters, it is uplifting about life.

John “Scott” G is a partner in Golosio Publishing (www.golosio.com) which creates and licenses music for songs, commercials, films, and TV. A related company, FookMovie, creates videos for recordings in their catalog. He is also owner of G-Man Marketing, an advertising and communications firm in Los Angeles. He is also the recording artist known as The G-Man, with his albums distributed by Delvian Records and available on iTunes. He’s a voting member of NARAS (the Grammy organization), on the Board of CCC (California Copyright Conference) and regularly writes about communications, marketing and advertising.