MuseWire COLUMN: Lydia Purple is one of those songs that, for me, encapsulate an era. It is evocative and redolent of the late 1960s. Like a latter-day time traveler, I cannot listen to it without being magically transported back to another world, another moment in space and time. The iconic version was performed by the Canadian band The Collectors and appeared on their eponymous first album. 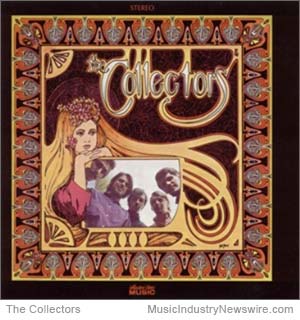 It was produced by Dave Hassinger (who also produced Jefferson Airplane’s Surrealistic Pillow, the Rolling Stone’s Aftermath and the Electric Prunes) and had his characteristic bright sound. What differentiated the Collectors from other myriad proto-psychedelic bands was their outstanding musicianship and harmony singing. The arrangements were in the baroque pop style of Left Banke, Love circa Forever Changes and the Beatles circa Eleanor Rigby. Lydia Purple has a prominent cello part and a recorder solo.

The rest of the album is just as crenellated with odd modulations, intonations and inflections, culminating in the histrionic What Is Love. But all of it is entrancingly beautiful – sensitive, intoxicatingly stimulating, vibrating with the sounds of harmonic convergence.

For some reason I remember playing The Collectors album together with Children of the Future by Steve Miller and Buffalo Springfield’s second album Again. They blended together into a cohesive set. Back when I was performing solo acoustic guitar (this was a really long time ago) (no singing, please) I devised an arrangement of the song, which was OK but not great. The Collectors put out a second record called Grass and Wild Strawberries, which wasn’t as good as their first. Then they dissolved and became a band called Chilliwack, which wasn’t very good at all. There was a creepy novel by John Fowles called The Collector, which has nothing to do with the band but is estimable in its own right.

The Lydia Purple covers I am aware of include one by a Dutch band named Cargo recorded in 1970 on its album of the same name, which appeared on my old label Capitol Records (actually, Harvest Records, which was an imprint). There is a performance of this on YouTube.

Cargo evidently was formed by members of another Dutch group named September, which also is reported to have recorded a version confusingly released later, in 1971. I have not heard it and it does not appear to be available. There is a version by the co-writers of the song, Don Dunn and Tony McCashen, which appeared on their 1969 record Mobius, also on Capitol. I heard this once on Psychedelic Jukebox, the best internet radio station in the world. While it might be available somewhere, I have not been able to locate a copy.

Then there is one by a Santa Barbara band named Giant Crab on its 1968 record entitled A Giant Crab Comes Forth. I have not heard this version either and who knows where it is now. The Cargo and Dunn & McCashen versions pale next to the Collectors, so I’m not all that worried about not having heard the rest.

The transcendental power of music to activate impressions, ideas and memories of time long since past.