Hardsoft: Velvet Chain Beats You Up with a Kiss

MuseWire BOOK SERIAL – Ambient Deviant Speedmetal Polka: Chapter 10 – Hardsoft: Velvet Chain Beats You Up with a Kiss — Velvet Chain seduces you while battering you into submission. The hypnotic delivery of lead singer Erika Amato is the obvious starting point in analyzing how they accomplish this feat. But while she can deliver a song using just slight gestures and delicate vocal inflections, it is really the totality of the band that truly shines. 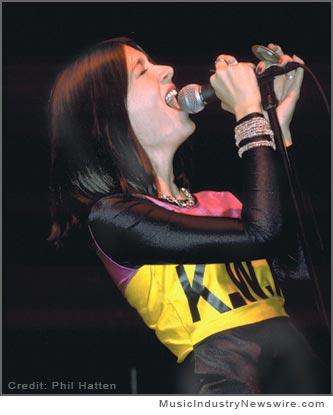 In Velvet Chain you have an act that fuses dance with trance, and while that’s not unique, it is pretty dang nice. At the same time they take a batch of airy-fairy continental stylings and blend them with urban rhythms. Plus, they grab fistfuls of modern techno and mix that up with some get-it-on rock ‘n’ roll. The result? Rumble-crunch hip-rolling action with pretty-pretty tunes. Despite the dark gothic sensibility to quite a bit of it, the whole affair turns out to be downright fun.

Sure, they achieved some popularity with “Slayer,” a semi-nifty commercial track about “Buffy the Vampire Slayer.” (You can find it here http://youtu.be/mFYJLhfEnKk if’n that’s your thing.) But the true awesomeness of Velvet Chain only comes out during live shows where the appealing melodies would meander amongst the monstrously big beats, the sneaky ‘n’ slick scratching, and most especially Jeff Stacy’s boombastic bass lines, most of which seem to do perverse things with your pelvis as well as just flat-out tub-thumping your chest.

On stage, the band could be sensational. Stacy is a non-stop machine, putting out supple and powerful low-end bump that lock-in perfectly with all the other elements of their sonic attack, including Arif on guitar and their studio-quality jazz-cat on drums, Brett Chassen. Then there were gorgeous keyboard figures from David Fraga and tasty selections from Mark “D.J. Swerve” Murry.

On several occasions, mostly in medium-sized clubs, I saw Stacy, Amato and the Chain construct sets that kept building in intensity until it felt like the place was going to shatter from the cornucopia of their creativity. Along with the extraordinary way Amato would connect with her audience, the overall presentation inspired unusual devotion from their fans. Many people would be hanging onto every syllable while others surrendered to the beat and launched into a style of touch dancing the likes of which you’d probably only see in adult-themed videos.

It’s in the Song

At heart, it may be Stacy’s song construction that makes a Velvet Chain show so rewarding. Here are tunes you rarely get anywhere else. There’s a style to them that is a concoction from a galaxy not of known origin: you’ve got liquid trip-hop one minute and Euro funk-rock the next. Whatever you call it, there’s a definite mystical attraction. Stacy designs his songs starting with the groove and then adds an other-worldly melody for Amato to embrace with her voice. On top of that come beats and rhythms and counterpoints and textures and all manner of aural embellishment that interact to perfection.

Fraga’s keyboard work is unusually supportive of the singer. Very cool. All the while, Arif plays with precise fluidity, always assisting the melody flow and often taking the tune into the clouds with fantastic and inventive runs. Plus, his arsenal of sounds is amazing; there may be other guitarists who can play so many different tones but nobody plays this number of them so expertly.

Velvet Chain is a sneak attack on your senses. They come on all touchy-feely and ethereal, and then they slam you up against a wall and have their way with you. For their tuneful overdose, for the nether-region reactions they inspire, for their visual delights, I heartily recommend them. They probably won’t hurt you, but their work will haunt you for days afterward.

Hardsoft. Love ‘n’ battery. Slap and kiss. The caress of the whip. Velvet Chain. No other band has had such an appropriate name.