A Guy Called Joe (That’s Mr. Satriani to You)

Some guitarists play at lightning speed but it’s the tone, the style, and the aura of magic that define the true heroes of the electric guitar.

Jimi rules. Got to get that established right up front. While this chapter is going to devote some of my usual tortured prose and laudatory language to a notable fretburner, we need to acknowledge that Hendrix is the leader on electric guitar (with a huge shout-out to Charlie Christian, who, along with Eddie Durham, pioneered the whole amplified axe thing).

(And while we’re engaged in some parenthetical phrases, please don’t forget that an earlier chapter in this opus was pretty high on the work of Jeff Beck and Jennifer Batten.) Okay, so here we go with another attempt to describe That Which Cannot Be Put Down In Words: namely, what makes a musician connect with a listener’s brain, heart, and soul.

For me, it begins with tone. Finding exactly the right mixture of gleaming brightness and dirty grit is the mainline super-duper big deal Job One for a guitarist, especially an electric guitarist. It’s primarily about the art of finding That Sound and applying it at the perfect point in a song. Tone sets apart the great guitar players from those who are merely good.

A performer’s choice of notes comes next, coupled with the dexterity and impetus of the player. Some people might this first, but not me — guess I’ve heard too many dexterous axe monsters whose tone was unchanging and thus predictable.

Finally, there’s the unquantifiable essence of aura or magic — that thing you cannot learn, buy, borrow, or steal. Some players have it; most do not. What’s truly weird and capricious about this is that some guitarists have it when you’re in the room with them but the sense of wonder doesn’t seem to transfer to a recording; and then there are those for whom the reverse is true: their recorded work sparkles with genius but they’re just okay when you see them in a live setting. Go figure.

Let’s consider all these points using someone familiar: Joe Satriani. You’ve heard his work or you’ve heard his name, and he’s either the greatest thing since sex or he’s simply a technical master who goes through his shtick very well but has no true worth. (I look forward to your letters.) 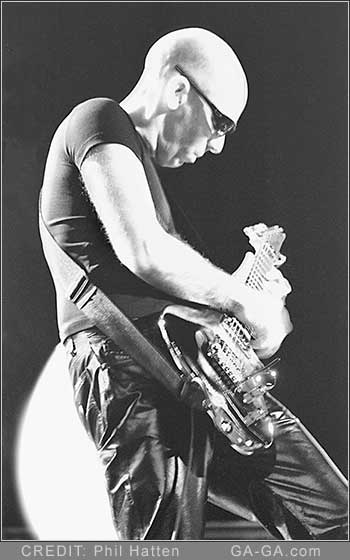 Satriani took over the Wiltern Theater for an evening of instrumental rock that was very impressive yet also the very definition of too much of a good thing. The show was a thunderous exploration of sound that touched on the edges of pop, fusion, and metal without ever surrendering to any of those genres. The man who fans call Satch lets his guitar do the singing, aided by his superb technical proficiency and the impressive interplay between the leader and his colleagues, in this case Stu Hamm on bass, Jeff Campitelly on drums, and Eric Caudieux on keyboards.

The show was a shred-lover’s wet dream, with majestic fretboard runs galore, stinging lead lines, intelligent solos, and very little wasted time between songs. It was quite compelling and often very beautiful. It was also unbelievably unremittingly unapologetically loud.

How loud? Well, allow me to tell you about Phil Hatten’s adventure in taking the photo for this chapter. He had an official photo pass so he was able to stand right at the edge of the stage. Right next to the 30-foot-tall stacks of speaker cabinets. The SPL (sound pressure level) was such that the push of air was flapping his jacket and mussing his hair. He tried resting his elbows on the stage to steady his lens, which didn’t work at all — the entire stage was shaking from the intensity of the sound. 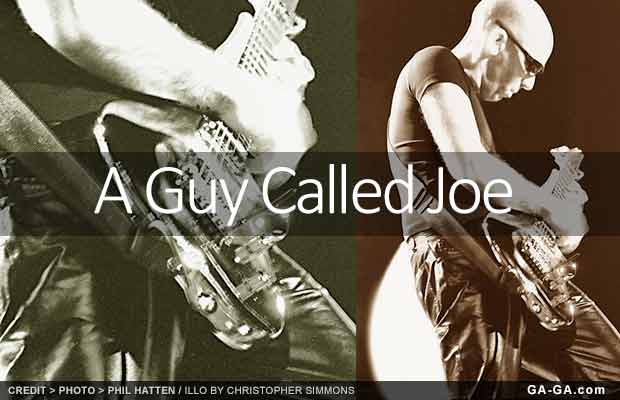 Meanwhile, sitting a few rows away from me was a man in his late forties or early fifties who kept holding a handkerchief over his nose and mouth whenever he wasn’t complaining about the large numbers of audience members who were smoking marihuana. I wanted to explain that the hanky wouldn’t be much help — he’d still get a contact high — but thought that this information might scare him. “Chill out,” someone told him. Excellent advice but doomed to failure.

Having the knowledge that wacky tobacky cannot harm you, I don’t mind if an audience gets high at a show, but I admit that it would be nice if concert promoters could somehow warn audiences which programs would permit “lighting of selected products” and which would not. I mean, you know there will be ganja at reggae concerts but how do you know before attending other shows? (“Friday evening’s performance of ‘Philip Glass Ensemble’ welcomes smokers of certain substances; Sunday afternoon’s presentation of ‘Madama Butterfly’ does not. Thank you for your cooperation.”)

The shape of Satriani’s songs is classic: intro, statement of theme (verse), uplifting make-ya-wanna-hum-along section (chorus), punchy inversion or twist on the theme (bridge), variations on the themes, outro. From such a simple foundation, Satriani does sometimes achieve the level of magic. His music can certainly lift your spirits — he can make you feel like you’re one of the beams of light in the stargate sequence near the end of “2001: A Space Odyssey.” It’s a musical version of a funhouse exhibit or rollercoaster ride. Some people can’t get enough of it. Unfortunately, he seems to be counting on that.

At the end of nearly ninety minutes of stellar performing, Satriani stepped to the microphone and said they were going to return in twenty minutes and would be supervising the partial destruction of the building (“tear the roof off the place” was the phrase, I think). The concert had been furious fun up to this point but unfortunately there was a sameness to a lot of the playing during the last several hundred thousand notes or so. Photographer Phil looked a question at me and I said, “Let’s get out of here while I still like the guy.” He nodded and breathed a sigh of relief. Best half-a-concert I ever saw.

Video of Joe Satriani playing “Flying in a Blue Dream” —