Getting the Right Guitar Tone – version 113.5

MuseWire COLUMN: It’s a rainy day in Southern California so I decided to fool around with one of the things I like doing best … experimenting with guitar sounds. I must confess I used to be pretty promiscuous with tonal experimentation. I went through your EL34s, 6L6 and KT66 power tubes, your Amperex, Mullard, Telefunken and Brimar pre-amp tubes, different combinations of speaker cabinets, etc. 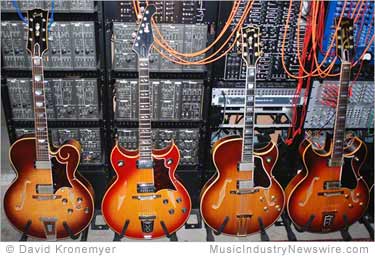 The Danish philosopher Soren Kierkegaard would have called this the despair of too much possibility; or, the dilemma of the aesthete, faced with the rotation principle. There’s simply too many options. It’s analogous to fuzz/overdrive pedals. At one point I had a couple hundred of them. Then I realized – how many do you really need? I wasn’t using them, anyway. So off they went. In fairness to them, however, the converse also can be true; different tools elicit separate emotions and invoke disparate ways of being. So it’s a fine line between not enough and too many – a slippery slope that is one of those black diamond runs, which I’m still learning to ski.

Eventually I settled down and realized what I liked best were EL84s. They go best with my style of playing – fingerpicks with medium-to-heavy gauge strings. This particularly is true for some of your larger Gibson jazz-style guitars, which I always use to play rock music anyway. While I have had reasonable success with Rickenbackers and a few odder models like Vox and Shergold, particularly in the 12-string department, I never have been able to learn how to play a Telecaster or a Stratocaster.

With a bigger instrument, though, one literally can hear the sound waves develop in its chamber, climb their way into the pickups, swish through the wiring, whirl around in the tubes and then pop out of the speakers. Once they get to the amp, they don’t have as much room to move around in the EL84. If they were expecting, say, a KT66, this must come as a surprise to them. They start bumping into each other, building up velocity, developing rounded contours like pebbles on a river bank being worn smooth by the current. After awhile they develop a lustrous patina, a kind of complexity and refinement, with overtones and harmonics built into the fundamentals – a way of being heard that almost is magical. 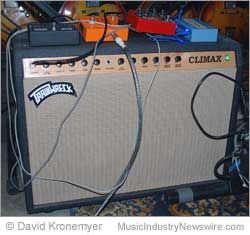 Strings obviously are important, too, and needless to say I’ve experimented with many different combinations. On thin-line electrics (both 6 and 12), for me, Pyramid Gold flatwounds now sound best. On the bigger guitars, though, I use medium gauge La Bella Phosphor Bronze acoustic guitar strings – I think the way they go is .012, .016, .022W, .031, .041 and .052. They are acoustic guitars too, sort of. A while ago it occurred to me that a wound “B” string would sound a lot better than a plain one, so now I’m using a .017W in place of the .016. This results in more tension on the string; it becomes more resistant, and vibrates better after you hit it. It’s not as flabby as a plain B.

I always use a compressor to even out string attack with the picks. I used to deploy incredibly complex compressor set-ups, using direct boxes to get into high-end studio compressors and then other boxes to get out of them and back into the amplifiers. I would use two or three compressors, splitting them by frequency so (for example) you could compress the bass end more heavily than the treble. Like the tube comparison contest, I eventually tired of doing this and decided just to use simple guitar compressors, which after all were made for just this type of activity. Lately I have been using a Dan Armstrong Orange Crusher reissue by Vintage Tone Project. I also have had good luck with a Jangle Box and even a simple MXR. While the control layout is minimal, these have maximum voicing for guitar.

The main problem I’ve had with most compressors is they tend to over-emphasize the sound of the high “E” string. Not their fault, because that’s what they do, that particular frequency just ends up being too bright. I have tried a variety of different techniques to minimize this, including notch filters at all of the nearby E frequencies (329.6 Hz, 659.3 Hz, 1397 Hz, etc.). What I finally settled on was an MXR 10-band EQ with everything set at 0 except the top band (16kHz), which I pull down as far as possible to –12 db. I insert this in the signal chain after the compressor. This does a pretty good job. Then, to give the sound more bloom and a fuller midrange, I’ve been using a Matchless Hot Box with the 12AX7 tube swapped out for a 12AT7, which preserves its qualities with less gain; or, an Aphex Guitar Xciter, which does pretty much the same thing. When set properly, you can hear the picks dancing on top of the strings.

I keep changing this last element around and have used a variety of other pedals for tonality and coloration. And then you can go crazy after that with various modulation effects. I permit myself to do this only occasionally to try and avoid contending with permanent insanity. I have to cope with enough low-lying brain fog the way matters presently stand, no point in exacerbating it with frightening devices that go over under sideways down, and then some.

Here’s a picture of a few guitars. From left to right: Tal Farlow, Trini Lopez, Byrdland and Barney Kessel. Plus the set-up described above, in this case going through a Trainwreck Climax amp. It breaks up really nice when you whack the lower strings with your thumbpick, yet retains crystalline clarity with the top ones. A few adjustments with the tone controls and before you know it, a perfectly good afternoon has vanished. But you’ve written a song you’ve never heard before, and leave the studio smiling.

Thanks to Tina at the Amp Shop in Sherman Oaks for keeping the guitars up and running, and to Greg Back for a couple of major restorations.