Future of Music and Media

COLUMN: The description on Amazon was interesting so I purchased “The Future of Music: Manifesto for the Digital Music Revolution” by David Kusek and Gerd Leonhard (Hal Leonard/Berklee Press, $16.95, ISBN: 978-0-87639-059-7), not realizing it was written in 2004 and released the following year. Sure, the publication date is on the site but my mistake was in thinking they would be offering an updated version of the book. My bad, caveat emptor, there’s one born every minute, etc.

Yet there is great value in reading a half-decade-old book about technology in the music business. Sure, some of their predictions seem antiquated today, but try making prognostications of your own and then seeing them remain in print for five years. Reading what Kusek and Leonhard got wrong is entertaining but seeing what they got right is enlightening. 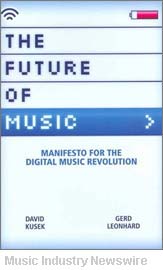 This is only partly a book review as I am using their work as a launching pad to assess the state of music and media in terms of modern and ever-changing technology. Follow along and see if you can find a place for your music amidst today’s gleaming and pulsating shards of techno gizmo interconnectivity.

Noteworthy
Kusek and Leonhard’s book causes a lot of reaction from the reader. There are 176 pages of text and I made comments on 41 of them as well as on numerous post-it notes affixed to various chapters. Engaging? You bet, and I enjoyed the book quite a lot. (Do you feel a “but” coming? You’re right.) I recommend the book as a fascinating read, BUT certain themes pop up in chapter after chapter.

Water Over the Dam, Music Under the Bridge
“Music like water” is a central premise to their book. I knew this right away because that concept is mentioned twelve times in the first 14 pages. Only later on in the book do they get to the fact that everyone PAYS for water. It may be only pennies per glass, but water isn’t free, nor should music be free.

C in a Circle
This might be a good time to point out that many of their arguments, ideas, statements, and theories are overt or covert attacks on the concept of copyright. On page 45, they argue that a digital copy of a work “does not in any way deplete it or remove it from further use” and therefore copyright is not needed in the digital age. In other words, they are making the outrageous claim that your song can be pirated ad infinitum and no one gets hurt.

On page 46, they claim that copyright infringes on everyone’s’ “right to be inspired,” completely overlooking the Fair Use provision of copyright law.

Also on page 46 is an argument against copyright based on the fact that the U.S. Constitution allows Congress to grant copyright to “authors” and so they feel that “large companies” like music publishers should not possess copyrights. This ignores the right of authors to allow music publishers to administer their songs for them or to sell their copyrights as they see fit.

On page 53, you’ll find them writing ominously that “powerful middlemen and their bean counters and legal eagles have artificially but nevertheless skillfully propped up the definition of copyright.” Their conclusion is that musicians must “give freely.”

On page 103, they write of “the maze of legal obscurities and public propaganda that surround copyright, courtesy of Big Music and Big Mouse,” referring to the major record labels and Disney. What they do not acknowledge are the myriad of schemes concocted by Big Corporations to steal copyright in any way possible, which is what has lead to legal methods to stop them.

On page 149, they contrast the copy protection of computer software with copyrights on our songs, stating “…preventing the easy copying of professional-grade software products is very different than preventing consumers from having a great and simple experience when they want to watch movies or listen to music.” In their view, the fact that people want what I own without paying for it is good enough. I’d love to extend their argument back to them, substituting a few things they own. For example, what if we wanted their book without paying for it? Or their cars, wallets, bank accounts, or their very identity?

As you might imagine, I do not mind confessing that the Kusek and Leonhard viewpoint on copyright is offensive to me as a music publisher and morally repugnant to me as a songwriter.

You would think anyone engaged in creating something (like a book, for example) would be in favor of copyright and would therefore be against efforts to eradicate it. Yet in the author acknowledgements, they thank John Perry Barlow and Lawrence Lessig, two people who are dedicated to destroying copyright, the former apparently because of synapse damage from too much illegal drug use and the latter because of pocketing large checks from hardware and software firms seeking ways to steal music without being subject to punitive damages in copyright infringement cases.

C in a Circle – again
To anyone who is thinking of remaining neutral on the point of the value of copyright, please consider these three points: Kusek and Leonhard copyrighted their book; Lawrence Lessig copyrights his books and articles; and John Perry Barlow copyrighted his songs (he now chooses to give them away, which is his prerogative, but his largesse should not become mandatory for any other writers). Strange actions, indeed, from folks who would casually annihilate your right to control your own possessions.

Putting Musicians into a New Line of Work
There is a common feeling among people who do not create anything that those of us who do should somehow earn our living in ancillary jobs. Songwriters and musicians, for example, should go into the business of touring, selling merchandise, and/or dealing with advertising agencies for commercial licensing of our work to compensate for the theft of our work in other areas of business.

As an example, they cite U2 appearing in an iPod ad with their song, “Vertigo,” completely overlooking the fact that this occurred 18 years into the band’s highly successful global career and was an opportunity not open to ninety-nine-point-nine percent of all other artists. Another example they blithely write about is licensing songs into Tony Hawk video games, which is not available to ninety-eight-point-eight percent of all other artists and rather conveniently sidesteps the fact that “Tony Hawk” is a one billion dollar corporate enterprise – exactly the bogeyman they use in many of their other arguments.

Predictions
Kusek and Leonhard were prescient in a number of areas. Among their forecasts was the explosion of wireless services. Give them props for that. They also were able to foresee the much-maligned 360 deals as being a big step in the music industry, using the U.K. Sanctuary Group as an example, which was a powerhouse at the time but has managed to hang on through one of the worst economic contractions in the history of Republican presidencies.

Today, Sanctuary is a firm that provides its musician clients with recording, management, visual entertainment, tour support, booking, music publishing, marketing, merchandising, and more. Unlike some of the big record labels and their onerous “all rights” deals, Sanctuary actually seems to be helping its clients, which include (as of this writing) classic artists such as ZZ Top and relatively newer acts such as Lonestar and Velvet Revolver.

In any case, the authors saw something big that was coming and reported on it before almost everyone else.

Product Placement
This is an area where they saw the future and embraced it. They give an entire page of their book to a warm and loving (and undoubtedly paid-for) description of a company called Hot Topic. Or, as they put it, a place where “you can find a huge assortment of street wear, retro-influenced lounge, punk, club and Gothic clothing and merchandise, including lingerie, hosiery, cosmetics, belts, handbags, shoes, body jewelry, make-up, rings, shoes, gifts, furniture, candles, magazines, vinyl and CDs, action figures and more.” They go on to write about the firm’s success and provide the URL for the company and one of their subsidiaries.

Other than leaving out SESAC, which is the third of three performance rights organizations in North America, that 26-word phrase is astonishing in its implications and could contain the idea that saves the record industry and enables songwriters to create music now and in the future. If ISPs would simply collect a statutory rate whenever a song is exchanged over their servers, the livelihood of musicians could continue into the foreseeable future. (Well, until the coming explosion of mobile2mobile file transfers, but that’s another argument.)

Hits and Misses
As you would expect with any book on technology that is now a half-decade old, there have been marketplace changes that could not be prophesied. After all, they expressed high hopes for Shawn Fanning’s Snocap to create revenue for copyright holders from the P2P networks (that’s peer-to-peer, for anyone who has been ignoring both music and the internet for the past decade or so) and Snocap has pretty much come and gone in the meantime.

On the other hand, they do direct readers to Terry Fischer’s Alternative Compensation System for music and media, a 66-page document that recommends either a compulsory or voluntary system to compensate authors for use of their work on the internet. The entire document is perched online at this intuitive and easy-to-find URL: http://cyber.law.harvard.edu/people/tfisher/PTKChapter6.pdf .

They hold out great hope for the eventual success of music recognition software, now emerging as audio recognition programs such as Landmark’s BlueArrow. “Within five years, most of the world’s formally recorded music catalog is likely to be recognizable by software, whether is uses waveform analysis, audio spectrum comparisons, fingerprinting, or watermarking ID processes.” I certainly hope this is the case and I have seen evidence that others feel the same way. The Production Music Association is very strongly in favor of this new technology and is urging ASCAP, BMI, and SESAC to work out the software for the benefit of all composers.

Wishful Thinking
Near the conclusion of the book, Kusek and Leonhard invite readers to “join us in a dynamic and interactive forum online,” a sort-of living book, if you will, with continual updates on the many topics they’ve raised. Unfortunately, this didn’t happen. When you visit the site, it is no more than a blog with links to tidbits about one of the authors and attempts to sell you things. In fact, of the book’s final 45 words, 24 of them are attempting to sell you consulting and business advisory services.

Compensation
Despite the malicious mischief in much of their book, Kusek and Leonhard do acknowledge musicians’ right of ownership and our right to make a living from our creations: “A challenge for the future is to find ways to better measure and report the commercial uses of a given work… based on a more fluid flow of knowledge and ideas, and the sharing across some form of alternate, contributory compensation system.”

Fair enough. Now if we can just rid the world of the “safe harbor” provisions of the DMCA (Digital Millennium Copyright Act) that lets ISPs off the hook for copyright infringement and piracy, that goal might be reached sooner rather than later. But this is a topic for a whole new article.