Force of Nature and Act of God: An Appreciation of Solomon Burke

MuseWire COLUMN: In blending soul, R&B, gospel, and rock, Solomon Burke had the ability to reach from the stage and shake listeners to their very core. The might and majesty of Burke is honored in this updated version of a review of his 1997 stage show. 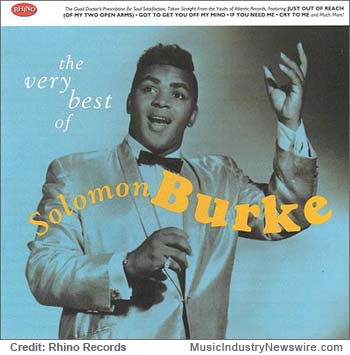 It is just before midnight and I am standing on the tacky floor of the Sunset Strip tourist trap known as the House of Blues, wondering about my purpose in life. Why am I in this oversize dive, I ask myself. The HOB has long been a clip joint where every surface has a layer of grime and every employee has the haunted look of a carnival grafter looking for ways to bilk the next mark, the next rube, the next chump.

At last, the background music fades out, the house lights dim, and the soiled curtains part to reveal a tuxedo-clad conglomeration of soul-bop funk ‘n’ rollers who have whipped themselves into a frenzy. Whether they are truly possessed by the spirit or are simply acting up a storm is something we will never know; either way, the effect on the audience is considerable.

The group is epic, starting with a ten-piece brass section that is punching and swinging at the same time. Their sound alternates between superb and something slightly better than that. There are also two keyboard players plus a rhythm guitarist, bassist, drummer, and five backing vocalists. They are wound up tighter than a skinflint’s purse strings and they conspire to lay down an irrefutable beat that shakes the entire square block of Sunset Boulevard.

I glanced at the crowd and saw people bobbing and weaving, often with awestruck expressions or big smiles on their faces. Many on the dance floor appear to have lost some control of their hips which are now undulating in a manner that is suggestive, to say the least.

Insinuating its way over and under this churning, burning, and finger-poppin’ sonic stew is the electric guitar of Sam Mayfield, a musician who seems to defy the laws of physics when playing his axe. His approach to the instrument might be looked at in this manner: while strumming an eight chord progression is all well and fine, listeners might find it interesting if the player picked out each individual note in each of the chords, all in the same amount of time it would take a regular performer to simply strum. Mayfield is positively phenomenal. You know about high MPH (miles per hour), Mayfield has high NPM (notes per minute).

After three high-energy numbers from this powerhouse band, the time was ripe for the big guy, the main man, the true king, the prime shouter of the soul review, the legend, Doctor Solomon Burke. He emerged from the wings slowly, regally, all three hundred pounds of him. His royal badness entered wearing a floor-length ermine robe, seemingly floating through an aura of rarefied air.

His presence alone caused a visceral change in the crowd. Clad in a blinding gold suit, he made his way to the edge of the stage and created a near-riot when he began handing out roses which he gently kissed in between delivering lines of one of his slower (read “still pretty damn fast”) songs. I was nearly trampled once and several times knocked off balance by whooping or crying females who rushed forward to obtain one of those flowers.

Burke was in full voice and he had come forth to take no prisoners. He was an unstoppable force of nature and one of those acts of God for which there is no possible insurance policy. All the while, Burke’s very big band slammed out the chunka-chunka-ka-pow-pow beats and Mayfield worked his Fender six-string in an attempt to perform at a never-before-heard rate of speed. But it was the big guy who controlled everything. After all, Burke is larger than life in every possible way.

Throughout the concert, he thundered, he crooned, he coaxed, he demanded, he talked sweet, he talked funky, he made you dance, he made you sweat, he made girls cry, and he made us all dizzy. Let’s face it: Solomon Burke conquered.

The whole grand affair was part of the promotional launch for one of the greatest collections of bompin’ stompin’ rockin’ music ever recorded. I am speaking of the Rhino Records product, the superlative “Beg, Scream & Shout: The Big Ol’ Box of ’60s Soul.” I love mine (please note my dutiful helpful hype) and have enjoyed every one of the 144 (count ’em!) tracks containing some of the thickest, nicest, and nastiest soul grooves you’ll hear anywhere.

Led by Burke, the entire ensemble performed with exuberance, ebullience, and exaltation. They played like this was the very last concert anybody was ever going to hear and it was absolutely magnificent. I left the venue on such a high that I almost didn’t notice my shoes sticking to the floor with each step.

Such was the state of our music temples in the nineteen nineties; I have returned to the HOB on several occasions in the last decade-and-a-half and the grime has always been apparent and annoying. Some things never change.

Video of “Cry to Me”

Article is Copr. © John Scott G, and originally published on MusicIndustryNewswire-dot-com before the site was revamped as MuseWire.com in March 2015 – all commercial and reprint rights reserved. IMAGE CREDIT: “Best of” album cover from Rhino Records.