Chadwick Wood over at iPad software developer Coffeeshopped recently announced that the latest update to the awesome PATCH BASE synth editor, now includes the somewhat rare FM synth, the FS1R from Yamaha. According to Chad, “Patch Base 2.10 adds an editor for the most complex FM synthesizer I’ve ever encountered: the Yamaha FS1R. This thing is a beast. First of all, it has 8 operators for FM synthesis! Imagine the possible chaos.” 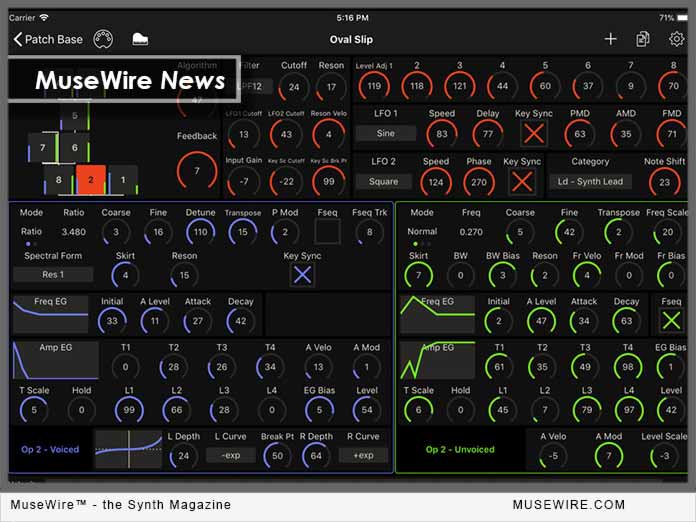 Having owned one of these myself (Christopher speaking here), I can attest to the amazing sound of this rack mount synth. I had hoped the Montage would offer the FS1R engine, or at least compatibility, but that was not meant to be. This means it remains a wholly unique instrument. But a mind-frack to program due to a very few controls and deep menu diving.

But Chuck also says it well: “…each operator has both a ‘Voiced’ and ‘Unvoiced’ part. The Voiced part is your tone generator (similar to the DX7), and the Unvoiced part is essentially a noise generator with its own envelopes, frequency controls, and bandpass filter. The Voiced part also supports multiple waveforms (the FS1R calls them ‘spectral’ forms), including a formant generator. Basically, you can make this thing sound like it’s talking. It is hands-down the most amazing FM synth I’ve ever used, and I’ve only begun to scratch the surface of sound design with it.”

Chuck’s post on the Coffeeshopped website summed it up this way: FS1R owners can go deeper with this synth, too. Like the FS1R itself, this editor was the most complex FM editor I’ve created so far. The current algorithm (out of 88 possibilities!) is shown in the top left, and also serves as the selector for which operator you want to edit. Each operator shows the output levels of the voiced and unvoiced parts of the operator, which helps give an overview of the structure of the patch. With 8 operators, a lot of patches won’t even use all of them!

Patch Base is available as a free download, allowing limited use of all synthesizers that the app supports. Full support for each synthesizer is available via In-App Purchase. Download now:
https://itunes.apple.com/us/app/patch-base/id1070270299

He even created a demo video, to show off the iPad editor:
VIDEO (YouTube):

This version of news first appeared on MuseWire.com – © Christopher Simmons.