MuseWire REVIEW: Edward Kennedy ‘Duke’ Ellington’s music is not often discussed alongside the work of Igor Stravinsky, Bela Bartok, and Arnold Schoenberg, but Reed College professor David Schiff convincingly makes a case for comparing and contrasting the creativity of each of these composers. Gershwin, Ravel, Debussy, and Alban Berg show up, too. 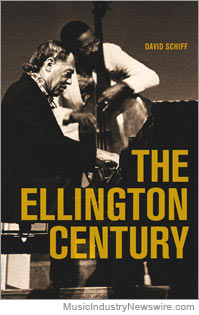 For music majors, this book is a must-read. For the rest of us, there are passages that will be a bit technical. At least Schiff mixes a scholarly approach with a delightful human touch, as in this sentence from the preface: “One day, after I had mapped out a chronological outline of the century with some flashy chapter headings, an alternative approach suddenly came to mind. . . Instead of doing battle with history I would write a nonhistory.”

Schiff states that his concentration in the book will be on the century’s music in terms of color, rhythm, melody, harmony, love, history, and God, always referencing Ellington’s music even when long passages explore the work of classical, jazz, and pop music composers.

Quite frankly, this approach just should not work, yet the result puts twentieth century music into perspectives I had never considered. Better still, his writing has encouraged me to widen my exposure to many more works and artists.

References to musical works abound throughout the book and I kept wishing that a CD or flash drive accompanied the volume. Thankfully, there is much available on YouTube. If, for example, you want to check out selections from Bartok’s “Music for Strings, Percussion and Celesta,” or Stravinsky’s “Rite of Spring,” or Schoenberg’s string quartets, you can do so. And while not all of Ellington’s approximately 1,000 compositions are available, there are quite a few postings of his work.

Each chapter opens with carefully selected quotations. I found that reading them before and after each chapter was instructive. And these, too, prompted me to expand my reading. Some are famous, like: “Ellington plays the piano but his real instrument is his band,” from his frequent collaborator, Billy Strayhorn. Schiff expands on that by stating “Ellington hired players with idiosyncratic and instantly recognizable playing styles, and composed parts for specific players rather than instruments.”

A quote from Claude Debussy, “The century of aeroplanes has a right to a music of its own,” made me look up Roger McGuinn’s comment about musical sounds in history: “The sound of the airplane in the forties was a rrrrrrroooooaaaahhhhh sound …. Now [1965] we’ve got the krrrriiisssshhhhh jet sounds…. It’s the mechanical sounds of the era: the sounds are different and so the music is different.” That quote is not in the book but it certainly could be.

Ellington did more than consider his performers when composing, he also frequently wrote with recording technology in mind, including the role of the microphone.

Early on Ellington saw that the new mechanisms for amplification and recording could enhance coloristic explorations. Long before the advent of recording “production,” let alone of electronic music, Ellington revealed his genius for technologically enabled sound synthesis in “Mood Indigo,” first recorded on October 17, 1930, but written especially for the “microphonic transmission” of a radio broadcast.

For the most part, Schiff wants to go beyond the sonics, to deal with “the intersection of high art and popular entertainment: African, American, and European traditions, improvised performance, and rigorous composition.”

To do so, Schiff delves deeply into twentieth-century pop and classical music, often in witty observations such as “…the 1950s, for instance, were the decade of both Boulez and Buddy Holly” and “With the appearance of Ella Fitzgerald’s ‘song book’ albums. . . the much-maligned output of Tin Pan Alley became the much-acclaimed Great American Songbook.”

In dissecting Ellington’s works, Schiff is both analytical and appreciative. But if, like me, you do not have music theory skills, you may have to just allow yourself to be carried along by his prose until full meaning returns. Here is an example of his discussion of “Prelude to a Kiss” —

Harmonies heat up the melody’s seductive moves. Ellington set the initial pitch, B, atop a D dominant-ninth chord to form the interval of a thirteenth above the bass, the highest possible upper addition to a triad. The thirteenth is a double dissonance, one seventh (upward from C to B) stacked on another (from D to C). Music theory terms these combinations of tones dissonances, but they sound sensuous, not harsh.

The book delves into the why and how of Ellington’s works from many angles. While his viewpoints are consistently interesting, Schiff doesn’t stop with his own estimations; he includes comments by colleagues and critics across a spectrum of the music world. A quote by Andre Previn really is a killer: “Stan Kenton can stand in front of a thousand fiddles and a thousand brass and make a dramatic gesture and every studio arranger can nod his head and say, ‘O yes, that’s done like this.’ But Duke merely lifts a finger, three horns make a sound, and I don’t know what it is.”

Schiff continually defines or even redefines music from the inside out. And he is quite egalitarian, digging into Alban Berg and George Gershwin equally. Genres are also explored, and he delivers one of the most interesting descriptions of the blues I have ever seen:

As much a poetic as a musical genre, it has its own verse form, syntax, vocabulary, imagery and subject matter. . .

Syntax: lines broken midway by a caesura, and at the end by a comma; these breaks usually filled with a guitar response

Subject: Suffering and escape from suffering

More than musical categories are deliberated. In a discussion of Ellington’s various “Blue Light” compositions comes this observation: “Like Monet’s series of haystack paintings, these works bathe identical subjects in changing light; heard back-to-back, they might be termed ‘blues-as-process’.” You will find references to painting, poetry, ballet, and literature throughout the volume.

There is a sense of bias in that classical composers are introduced by last name (as in this sentence: “Euro-jazz by Milhaud, Ravel, Hindemith, Krenek, and Weill dominated the new music scene of the 1920s”) while jazz and pop composers, and most jazz performers, are presented with both given and surnames. I admit that “Davis” or “Goodman” may not mean as much at first glance as “Miles Davis” or “Benny Goodman,” but who other than those deeply into music know that it’s Darius Milhaud, Paul Hindemith, and Kurt Weill? (And how many people know that it’s Ernst Krenek?)

From time to time, things get a little high-fallutin’ for my taste, as in his use of “vers libre” instead of just saying “free verse” or when he writes of George Perle’s discussion of Alban Berg’s hand-annotated score to his “Lyric Suite” that “The annotated score may be less an urtext than a billet-doux.” Really, it doesn’t seem that it would have been so hard to just say “less an original musical manuscript than a love letter.” But maybe that’s just me. However, Schiff’s next sentence is: “Perle’s revelation of the secret program marked a turning point in the hermeneutics of twentieth-century music from modernist formalism to postmodernist semiotics.” Hello.

The subject of race appears from time to time. “Until rhythm and blues crossed over to become rock and roll, the blues scale functioned as a racial marker in pop tunes,” he writes, going on to note:

The blues scale indicated that a song, like “Stormy Weather,” was intended for black performers because it portrayed emotions that “they” had but “we” could not express, or it portrayed a “mongrel” condition, like that portrayed by mixed-race Julie in Show Boat when she sings “Can’t Help Lovin’ That Man of Mine.” The blues scale in particular became a fixture of torch songs, from “The Man I Love” to “The Man That Got Away,” sung by women who had “gone south” and paid the price.

My first reaction was WTF but since so much else in the book seems either right on or revelatory I’ll go revisit those songs and see if I get the same context as he does.

There is much to admire in this book. In no particular order, let me mention his noting the now-forgotten practice of classical improvisations: “Opera singers in the baroque and bel canto eras added ornaments and embellishments to arias; concerto soloists were similarly expected to improvise cadenzas.” And this:

To a greater or lesser extent, jazz improvisers are not just doing what comes naturally. Most jazz players live up to the old title “professor” that once designated the resident pianist at a bordello. They know more about music theory than anyone else in the business, and they practice as systematically as the most competitive concert violinists.

Also terrific is his shout out to jazz composers: “There is much evidence to suggest that certain practices of European modern harmony, including added notes, polymodality, and polytonality, began as responses to jazz (or its predecessor, ragtime) rather than the other way around.”

Or consider this description of one of Arnold Schoenberg’s works: “Op. 23 no.2 sounds like a man wrestling with an angel. Its harmonies are at once visionary and tactile…” Schiff makes me want to listen to this work immediately.

In his rumination on Ellington’s “Warm Valley,” Schiff injects poetry into his prose:

Schiff himself points out that “Americans, and Europeans as well, conflated jazz and sex, and imagined jazz as a black Dionysus….” Schiff then includes a quote from Ellington about the relationship of sonics and eroticism, including a reference to “an aria of the sex symphony.” I won’t include the whole passage, but like his musical compositions, it is beautifully crafted and quite delicious.

Schiff touches on music by Steve Reich, Charlie Parker, Cole Porter, Erik Satie, and many more. He also explores some of the hullabaloo over free jazz, which is often performed with no regard for harmonic progression and which raises atonality to new heights. He states that “Ellington anticipated this controversy by more than a decade” in his 1947 Carnegie Hall concert where he “let loose the most outside piano solo he or anyone else had imagined up to that time.”

In moments like these, Schiff makes you yearn to be a part of the ongoing flow of all music, not just jazz, or classical, or pop, or anything else. And that is one of the highest compliments I can pay the book.

Article is Copr. © 2012 by John Scott G and originally published on MusicIndustryNewswire-dot-com before the site was revamped as MuseWire.com in March 2015 – all commercial and reprint rights reserved under U.S. and international copyright conventions. Video – Mood Indigo by Duke Ellington and His Orchestra.