Book Review: Man in the Music

REVIEW: From his smooth writing style to his commitment to interviewing nearly every possible source involved with the material, there’s a lot to like about Joseph Vogel’s new book on the King of Pop. 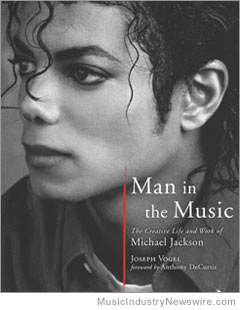 In fact, considering the poor quality of much that has previously been churned out on this topic, I think a lot of people will be pleasantly surprised by “Man in the Music: The Creative Life and Work of Michael Jackson.” Perhaps the best thing I can say is that, after dipping into it, you may just discover that it is more than the sum of its parts.

You can read this book in two different ways. The first and most common method would be to immerse yourself; you can simply read from first page to last, like a novel full of bigger-than-life characters who turn out to be interesting individuals working with one of the giants of entertainment. But there’s another use for the book: you can dip into it again and again to check out what was involved in the inventive decision-making behind the creation of some of the world’s favorite and most successful songs.

This volume may be much too lively and entertaining to be considered a reference work. That reservation aside, the book is valuable on both levels and serves as an examination of the subject’s intense desire and will to produce music that existed as art while also achieving commercial success.

Reading this book, you will experience a strong “you are right there in the room with these people” feeling. Vogel has achieved a fine blend here; for example, there’s investigative reporting on the one hand, and then there’s transcribed oral history on the other. The result feels like a compact compendium of fact, emotion, opinion and perspective.

Having written about politics in his first two books, “Free Speech 101” and “The Obama Movement,” Vogel may appear on the surface to be an unusual choice to tackle the subject of Michael Jackson. As it turns out, his ability to subtly weave a myriad of fact into a personal perspective is extremely effective; his talent to make you see and feel his own reactions and emotional connection with Jackson’s pop music makes this book even more of a success.

There is no need for me to go into the case for Michael Jackson as performer, songwriter or icon, but Vogel gives plenty of examples of the ways MJ affected musical and cultural shifts in the latter part of the last century and into the beginning of this one. Again and again, there are scenes where Vogel subtly puts you inside the moment so you can feel something of what it was like to experience the creative process. “Man in the Music” showcases Vogel’s attempt to place every part of Jackson’s muse into historical perspective. (Please note how I refrained from using the word “zeitgeist” in this paragraph.)

Everything in its Place

Seven of the eight chapters are organized around one of Jackson’s albums, and the stories are often revelatory as Vogel points out facts that are not top-of-mind even for Jackson fans. For instance, he notes that the overwhelming success of later albums sometimes eclipses the achievements of Jackson’s first solo effort, “Off the Wall,” yet when it was burning up clubs and radio during 1981 it was then the largest-selling album by a black artist in history.

Another fascinating section is Vogel’s description of the first official pre-release listening party for “Thriller.” Far from the moment of triumph everyone expected, “It was a disaster,” Quincy Jones stated. The first single had been released, the promotion campaign was ready, the public (and the record company) was clamoring for it, and they were dead in the water. It was only with intense dedication and perseverance that the tracks were re-mixed into the sonic perfection we know today.

However, once “Thriller” hit the scene, the discussion was no longer about Jackson being in a niche such as R&B or dance. With the monumental sales of that recording, popular music itself had been transformed. This was not only due to the indelible compositions and glorious performances, but also to “The A-Team,” as it was known: In addition to MJ himself, there were Quincy Jones, Rod Temperton, Bruce Swedien, and Matt Forger.

Technology in the Service of Art

In creating the landmark that was the “Thriller” album, the team was utilizing then state-of-the-art recording technology: 24-track analog. But they used it differently, and better, than anyone had ever done before. The songs on “Thriller” went beyond 24 tracks, often way beyond, so they synchronized multiple sets of 24-tracks, which in the album liner notes was called the Acusonic Recording Process.

The result was a lushness and complexity to the sound that prompted many in the recording industry to try emulating. As Vogel reports:

After “Off the Wall” and “Thriller,” when others in the industry heard the incredible richness and vibrancy of Michael Jackson’s albums, they tried to imitate this texturing by simply stacking parts. “There was a misconception,” says Forger, “that ‘Oh, if I play the same guitar part six times it will make it thick and rich’.” Instead, the result was often mushy and overproduced. “We didn’t use all these tracks just to record over and over again,” says Forger. “We used them so that Quincy could layer different sound characters together very strategically so that the textures that were created had this richness and depth.”

In another section of the book, Vogel puts into perspective the leap forward that was achieved by The A-Team, not only in terms of manipulating technology, but in the creative application of that technology:

It has often been said that groups such as the Beach Boys and the Beatles were the first to use the studio as an instrument. “What we did on ‘Thriller,'” says Forger, “was the extension of that. We were able to warp the technology and stretch it to such an extent that we were able to make the technology adapt to whatever it was Michael or Quincy creatively wanted to achieve. . . .” For Jackson, as with the Beatles, the studio technology always followed the lead of the music.

Because of the thoroughness of Vogel’s research, there is a great deal of setting-the-record-straight in the book. Some of the more intriguing points involve the number of recordings Jackson made. Upwards of 100 songs would be worked on in order to find the ones that would appear on the albums. As Matt Forger put it, “With Michael, he never stopped creating. He wasn’t an artist who said, ‘Oh, I’ve got an album coming up, I better start writing songs.’ The songs were constantly flowing from him.”

Obviously, a great deal of unreleased material exists. For example, with “State of Shock,” a Top Ten hit for Jackson featuring a duet with Mick Jagger, there is also a demo featuring Jackson and Freddie Mercury. There are 25 more titles of unreleased songs listed in the book, often with interesting descriptions of the writers, producers, and performers.

Vogel’s prose continually pushes you forward from one interesting point to another, from one arresting opinion to another, and from one eyebrow-raising conclusion to another. In some sections, you may find your head swimming from the social, political, artistic, and cultural ramifications emerging from Jackson’s music, movies, and dance moves. Without calling much attention to itself, Vogel’s writing is quietly incendiary and often rather delightfully subversive.

He also quotes seemingly everyone who was involved with the phenomenon that was Michael Jackson, from Michael Eric Dyson to Greil Marcus, from Jon Pareles to W.E.B. Du Bois, and from Stevie Wonder to TV Guide.

The conclusion of the book comes upon us much too fast, but I feel the most interesting summary actually occurs earlier in the work, during Vogel’s discussion of the “HIStory” album:

People were quick to scoff, mock, or offer advice. Yet very few could imagine what his life was actually like: the loneliness, abuse, exploitation, and constant expectations in the early years; working all day in the studio, while other kids played in the park across the street; not being able to leave the house without being mauled from the time he was ten years old; hiding in a dark closet because of the shame and fear of fans seeing him with acne and rejecting him; the looming presence of an abusive father who might yell at him or hit him for any perceived imperfection. . . while there are many layers to the enigma that is Michael Jackson, the trauma of his “lost” childhood is where it all begins. The rest of his life, in a way, was an ongoing attempt at recovery.

Article is Copr. © 2011 by John Scott G and originally published on MusicIndustryNewswire-dot-com before the site was revamped as MuseWire.com in March 2015 – all rights reserved. Disclosure: No fee or consideration was paid by the book publisher/author for creation of this original article.