MuseWire COLUMN: Storytellers are to be cherished and Clark Terry should be on a pedestal for his thoroughly entertaining autobiography. Brimming with life, love, music, and great characters, this book is as much a history of the twentieth century as it is a history of his ninety years (and counting!). 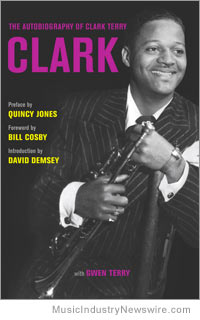 The opening line of Clark Terry’s book tells you a few things about the man: “I made my first trumpet with scraps from the junkyard.” This brilliantly sets the stage for a story of a man with an indomitable will and an intense dedication to music. It also shows a guy who is just the right amount of crazy.

“Clark” (written with his wife, Gwen Terry) is a book that is chock full of sights, sounds, smells and situations involving big characters and big emotions, all played out against nine decades of history. There are pimps, whores, con artists, racists, and a full complement of good people and bad.

Jazz giants like Duke Ellington and Dizzy Gillespie are a part of his tale and we get to eavesdrop on some of the conversations. His meet-ups with Miles Davis, scattered through his life, are interesting or acerbic, or both. Through it all, his lifelong friendships are touching and his dedication to jazz (and the teaching of it) is inspirational.

Okay, you were warned about what’s coming up. There are exciting interactions with the fringes of society and some of the power brokers with whom he had to deal, including the Purple Gang, one of whom would stroll through the club in a “sharp suit, escorted by his bodyguards.” This man’s “signature style was a white cap and a real pigeon roosting on his shoulder.” And there are passages like this:

…one of the acts was a short little piano player named Peanuts. He rolled the piano from table to table while a sexy girl named Mary Calendar sang and did risque dancing. It was customary for her to do little private dances at a particular table. After her dance, she’d pick up any coins given to her with her “other set of lips.”

What happens next is even more outrageous but I’ll let you discover all the wild scenes for yourself.

Terry may not be a great writer in the classic sense of the term, but he is a great storyteller in any sense of the term. And his life is one big, bountiful, beautiful story. While his style gets to the nitty-gritty in scene after scene, it also has some of the positives and negatives of verbal history. Like the turnaround. Here is the conclusion of a section dealing with his having to pass a swimming test while he served in the Navy during World War II:

I got out and walked away hoping that they had accepted what I’d done. When the instructor blew the whistle, I glanced back and saw the next guy jump in. No one called me back, so I walked away calmly, while my insides were jumping for joy.

A few weeks later I got an unwelcome letter from home.

That type of thing happens a lot and it rather charmingly propels you forward.

Kicked out of the house before his thirteenth birthday, Terry learned how to make his way through life the hard way. There was scrapin’ and scrappin’ galore as he struggled to survive while always returning to music, whether playing with others or spending hours and hours practicing. Until there were sores. Until there was blood.

To enter this world is to be swept away with him, as in his first trip into New York:

Billy met me at Grand Central Station. I was overwhelmed by all the people. All colors, foreign accents, moving, pushing, talking. Billy was grinning like crazy, telling me all about the things he had planned for us. I didn’t hear much of what he was saying while we were walking to the subway, ’cause I was totally wowed! Tall buildings, a sea of yellow taxi cabs, restaurants, stores, and honking horns.

While the book is a story of a man’s journey through life, love, and music, it is also about racism. The tales of indignities and violence are numerous and incendiary. Some of them resulted in flight; some in calls for first aid; some were deadly.

On the other hand, the colors of people are noted frequently by Terry, almost always in a descriptive and friendly manner. This guy or that gal might be the “color of nutmeg,” “Dark-skinned,” “Medium-brown skinned,” “Olive complexion,” “caramel-skinned,” “light complexion,” “color of bittersweet chocolate,” and so on.

At one point, he talks about joining the colored musicians’ union: “The whites had theirs and we had ours, but we all read the same black notes on white manuscript.” It’s hard to top a sentence like that.

While his love for playing knew no boundaries, there were some performing situations that had a bit more tension than others:

All the cats from St. Louis carried a shank — in common language, a knife. So did I. When I’d come to work, before I took my music out of the book, I’d push the switchblade button. Bling! The sharp metal would flash in the lights. Then I’d throw the knife so that the point of the blade would stick in the fiberglass music stand. Boing! …”Good evening, everybody.”

I have nearly a page of notes leading to cool quotes in the book. Like when Terry mentions that “Jazz saved my sanity. Which made me love it even more.” Or when he is talking about a trumpet player who was waiting tables “because it paid more money than gigging.” Some things never change.

Throughout the book, the teaching of jazz becomes an all-powerful force after working with his first student, “a skinny young kid” trumpet player of about twelve years old named Quincy Jones. For Terry, passing along the insights and traditions of jazz became almost an obsession:

It was the greatest feeling in the world to think that I had something to do with the careers of my students. The greatest feeling. I loved the awards that came from here and there, but the thing I loved most was to see those young people grow. Watch their dreams come true.

Jazz is a constant throughout the journey, but so are pretty ladies, all kinds of food, good deeds, wrong turns, and more food. Every type of meat and vegetable seems to be simmering in the background somewhere. Because of the segregation the bands endured on the road, they often had to cook for themselves. “We cooked beans in a pot on a hotplate or on the back of an iron.”

Time and again, Terry provides delicious descriptions of great, hot jazz. He refers to train rhythms, horse hooves on the street, the tap dancing of a childhood friend who affixed PET Milk can bottoms on the soles of his shoes, “raindrops on the coal shed in the old chicken yard,” and much more. As a writer, I love these sections, especially here where he gets inside the genius of Count Basie:

During his easygoing renditions, there was a soul-stirring feeling. His four-four rhythm swayed a head-nodding and ear-bending groove, an easy foot-tapping bounce. Then during his up-tempo renditions he created a finger-popping force that made you move.

In the back of the book is a nineteen-page discography compiled by Tom Lord, editor of the Jazz Discography Online. It lists 371 releases. After reading Terry’s stories, I now want to hear every single one of them.

Article is Copr. © 2011 by John Scott G, and originally published on MusicIndustryNewswire-dot-com before the site was revamped as MuseWire.com in March 2015 – all commercial rights reserved. Disclosure: no fee or other consideration was provided to JSG, this site or its publisher, by the book author, publisher or agent(s).