MuseWire BOOK SERIAL – Ambient Deviant Speedmetal Polka: Chapter EIGHT – Powder Keg — A truly exciting band is one with the ability to make your hair stand up all over your body and make you forget you missed dinner when you rushed to their show right after work. It is a group you will gladly see over and over and over, and one you’ll drag friends and neighbors to see in hopes of making new converts. For me, such a group wasn’t a global or even a national outfit, it was a local band called Powder. 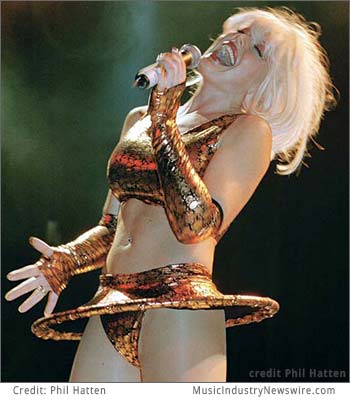 You will never see the world’s most dynamic rock and roll band. And now, no one else will, either, because they no longer exist. Sadly, the reason they no longer exist comes down to a domestic dispute: the lead singer was married to the lead guitarist (you already know where this is headed) and since they lived together, wrote and produced and performed their songs together, the band dissolved when their marriage went bye-bye. Fortunately, I had taken my son to see this band before the break-up, so at least one member of the next generation can carry on the memory of the explosive package called Powder.

Okay, my confession: as noted in chapter one, I have not seen live shows by some of the greatest performers in the world. I have only experienced The Beatles, James Brown, The Clash, Led Zep, and Hendrix in their motion picture, television, and DVD incarnations. Certainly, they all are magnificent, and who knows, maybe one of them would top my personal list of the best live shows if I had been inside the auditoriums or arenas with them. It is difficult to say what the film medium does to enhance or detract from a live performance. Hell, the Beastie Boys looked and sounded amazing in “Awesome: I Fuckin’ Shot That,” and that group doesn’t usually get mentioned among the Top Live Attractions Of All Time (TLAOAT).

But among those artists who do get mentioned as among the TLAOAT, I have been fortunate enough to have seen: The Rolling Stones, Bob Dylan, David Bowie, The Who, Stevie Wonder, Pink Floyd, Elton John, The Doors, The Byrds, The Kinks, and Frank Zappa. (For what it’s worth, I’ve also seen a whole bunch of people who don’t usually appear on the Best Rock Show list, including Miles Davis, Joni Mitchell, B.B. King, The Beach Boys, Benny Goodman, Bo Diddley, Art Pepper and a ton of jazz artists most people would not recognize.)

Okay, the point is that my naming Powder as the most dynamic is a statement that comes from a degree of perspective. Sure, my viewpoint could be skewed. Wait, “could be”? Of course it’s skewed, it’s my own personal choice, and I’m basing it on visceral excitement, memorable melodies, and musicianship as precise as an atomic clock. Using that set of criteria, Powder is the winner in my own private sweepstakes. And if you’ll give me a couple more minutes, I can tell you why.

(This is written from the devoutly-to-be-wished standpoint of a still-extant band. In other words, it’s in the present tense.)

Just saying that Powder is potent doesn’t go far enough because that’s like saying the sea contains salt, the pyramids have pointy tops, the Himalayas are tall, and republicans are dangerous to the health of the country. All of these are true statements yet each does not go nearly far enough. So let’s try this:

Powder is a brain-bending and sonically superb techno-rock experience, a heart-stopping, blood-boiling aural beast, a rock ‘n’ roll dream machine that uplifts you while wringing you out. If you’ve ever taken a header off a cliff or a moving vehicle, you think you know what adrenaline tastes like. But then fate tosses you in a room with something like Powder. This is a 200-proof triple shot poured straight into your cerebral cortex, a four-piece battalion that pulverizes your bones while tickling your fancy. The tunes are pop-rock with octave jumping shifts and electronic-fueled touches in a relentless speed-groove style.

The audience at a Powder show is comprised of adults, teens, and ‘tweens, most of ’em rabid and mostly smiling, something that is rare at most nightclubs. A diverse conglomeration of folks, a Powder crowd exhibits wonderful behavior, I guess because everybody is so happy. Standing shoulder-to-shoulder and hip-to-hip, they yell the band member’s names between numbers as well as joining with the band’s performances by singing the choruses to the songs. Hell, some of the attendees even sing the verses, a damn fine demonstration of fan loyalty.

Speaking of aficionados and their devotion, I once saw Powder play a show in Hollywood on a Friday night and then saw them again at another show in Hollywood the following Thursday night. But here’s the thing: both shows had capacity crowds. Pretty amazing.

Phil X (Phil Xenidis to be technical about it) is positively scary on guitar. Power chords crashing, single note runs of extraordinary speed and complexity, fretboard tapping, the whole package of axe ace activity. But his work was always in service to the song and the band’s arrangement of it rather than just showing off. And if anybody was confident enough to step onstage with him, they discovered he knew the tunes in any key you’d like. Meanwhile, Ninette’s vocal excursions pack the punch of an apple laced with strychnine even as the rhythm section would be pulverizing you whenever they weren’t making the crowd go into that up-and-down bouncy-dance-move thing. Not that anybody was trying to bring back pogoing, it’s just that Powder shows were always so packed that vertical movement was the only option.

For the record, the official band was the duo of Phil X and Ninette, but they performed live as a quartet featuring a succession of bass players (Allan Hearn was the one I saw most often) and drummers (I saw Cary Kane, J-Bo Dynamite, and “Dogboy” more than any others). No matter who was performing in the group with them, Powder would hit the stage with a well-rehearsed act combining precision, authority, and a dedication to the majestic properties of rock.

Their mystic properties are sorely missed. The musical explosion became a personal implosion. No more monthly fix of raw Powder power. No more delightful jolts to the heart and scintillating shocks to the system. No more standing in awe as they weilded crushing crashing thunder and scientifically blended it with catchy melodies and otherworldly harmonies. It was great fun while it lasted.

Where have these folks gone? Phil X and Brian “Dogboy” Burwell are in a punk trio called The Drills along with Daniel Spree on bass. Ninette is in the death-defying aerial act known as Silk Sisters. Drummer Jo-Bo (Jeremy Spencer) is in 5 Finger Death Punch. Don’t know about any of the others. They all have their new lives; the rest of us have our old memories. Guess that’ll have to be enough.

Powder video of “Up Here” –

Excerpt of book serial is Copr. © 2012 by John Scott G – all commercial and reprint rights reserved. Originally published on MusicIndustryNewswire-dot-com before the site was re-branded in March 2015 as MuseWire.com, a publication of Neotrope®. Photo by and © Phil Hatten. Used by permission.