MuseWire BOOK SERIAL – Chapter FOUR – First, They Laughed: A Big Bad Blast of Buckethead — Hitting the stage incognito isn’t new but no one else has been outfitted like this: an oriental theater mask, a nylon hoodie, and a family-size chicken bucket from KFC. Reactions are derisive and derogatory until the guy starts to play. That’s when the God talk starts. 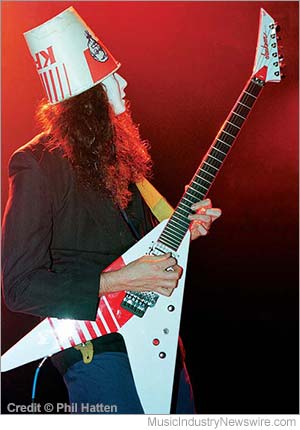 Guitar Messiah. Creature from another galaxy. Weird guy who is trying to become a cyborg by fusing his body (or at least his huge hands) with his electric guitar.

All or some of that may be true, but this much we know about the apparition known as Buckethead: he only appears in public behind a Kabuki-style mask and under a KFC bucket. He never speaks. He has a sense of humor that can only be called perverse. And he can play anything on his guitar. Anything. Metal. Funk. New Age. Rock. Jazz. Avant-garde. As I said: A-n-y-t-h-i-n-g.

A masked marauder on the six-string, the songs and sounds he creates are cross-cultural and genre-blending. He easily moves from ethereal, emotion-on-your-sleeve compositions to snarky, bombastic pieces; and touching on all points in-between. There is no other musical force quite like Buckethead and his approach to music is so all-encompassing that he has appeared on a William Ackerman album (founder of the whisper-soft Windham Hill label) as well as on the extremely noisy “Mortal Kombat” soundtrack.

In concert and on his albums, he will mix crunch-heavy stuff with softer passages and throw in tempo changes at the drop of a hat. Or a bucket. The intensity of each performance is extraordinary, as is his connection with the audience. Fans of his rip-snortin’ rhythmic mayhem sometimes amend the old Eric Clapton catchphrase and shout out “Buckethead is God!”

In shows at small and large venues, Buckethead has consistently demonstrated why he is the most amazing metal guitarist in the world. For example, even when saddled with a mediocre sound mix at The Palace (something that venue regularly does to non-headliners), he still astounded listeners in a magnificent forty-minute set that was much too short.

Usually favoring instrumentals, Buckethead does sometimes appear with a vocalist. Beware of these shows. The vocalists he chooses range from bad to bad-beyond-belief. Many of his fans had high hopes for his teaming with Axl Rose in the re-formed Guns ‘n’ Roses, but that association didn’t last long. Speculation for this included “Buckethead got stronger audience response than Axl” and “Buckethead improvises at a higher level than most rock musicians” but I think it probably had more to do with the restless nature of some creative personalities. With a Buckethead show, the element of surprise is high. The element of danger, too, although we could all do with fewer numbers from his lead vocalists . . .

He gives his singers freedom to spout ridiculous garbage that is obviously designed to offend as many people as possible, apparently because he finds that humorous. For example, the lead vocalist at The Palace show was vile, offensive, idiotic, and gross. It was a relief every time the clown shut up, but the stench of rudeness and disgust he left hanging in the air meant that some of Buckethead’s magic was negated. In a show at the West L.A. Gig, there were only a couple of vocal distractions, either because Bucket didn’t feel as angry at the crowd or because the smaller club meant the audience was just a few feet from the band, meaning that we could have easily slaughtered the singer if he had gone as far as the idiot at The Palace.

The compositions Buckethead creates are worthy of the best progressive rock band yet they allow for plenty of riffs and the type of beat that allows the audience to do that bobble-head shake-your-noggin thing that chiropractors probably love to see. What is consistently exciting about Buckethead is his ability to put several riffs together, piling one atop the next until the room feels as if it is being turned inside out and you along with it. Musically, you have to hang on for dear life.

Okay, let’s examine the potential for building up body heat: here’s a guy who’s behind a mask, under a hood, inside a long-sleeved jacket, and with a damn bucket on his bonce. All that, and he’s working under spotlights. You think maybe he perspires a bit? Oh yes I think so. Consider: every now and then between songs, he will take his guitar and swivel it so the body and neck are parallel with the stage floor. At first I thought it was a nervous habit. No, he was pouring sweat out of the pickup cavities in the axe.

Putting a Name On It

Remaining secretive, the guitarist regularly gives out fake names and rather fascinating (if surreal) “facts” to the press, which means that his online bios often rival Andre Malraux, P.T. Barnum, and GOP flacks for veracity. But I think you should ignore all that and just listen to him play. It can be a magnificent and almost literally stunning experience. Watching a Buckethead show is a sonic fuck.

Sure, other guitarists have converted power chords into melodies, and some have created beauty from dissonance, but no one does it with as much style and musical substance as Buckethead. Oh, and he’s loud. Very loud. In case you were wondering.

Next time Buckethead performs anywhere near you, do yourself a favor and go see this guy. The look, the lyrics, and the secretions may be alarming, but the music is triumphant.

Well, just a static shot, but the song is cool!