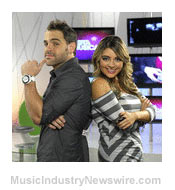 Each week, Nota Musical welcomes guests including Carlos Baute, Ricky Martin, Diana Reyes, Jon Secada and many others. And, Nota Musical provides a red carpet perspective from the hotest Latin music awards shows and events. For its many fans across Facebook and Twitter, Nota Musical features news updates and several opportunities for fans to win concert passes and meet their idols.

As Nota Musical’s new co-host, O.Z. (pronounced o-si), keeps viewers up on the latest moves across the Latin charts, as well as the urban music scene, emerging artists and upcoming concerts/events. No stranger to the arts himself, O.Z. sings in the Puerto Rican band Vitamina-L sharing the stage with Andy Montañez, Víctor Manuel, Ismael Miranda and Papo Lucas and opening for Wisin y Yandel, Héctor el Father, Yomo and others in the urban tropical music scene. Also an avid student of theater and cinema, O.Z. has appeared in numerous films, TV programs and theater productions.

In nearly 40 markets, Vme is available free over-the-air, and on basic digital cable. Vme is also carried nationally via satellite in the basic and Hispanic packages of Dish Network and DirecTV. In some areas, Vme is available on Verizon FiOS and AT&T U-verse. For local channel information go to http://vmetv.com/estaciones .