COLUMN: Well, it began as what appeared to be yet another anti-Apple fanboy rant about Steve’s passing – he’s sick again, Apple is doomed, etc. — not unheard of in this era of fake news, junk news, and mis-read signals about celebrities and their antics. But word was soon confirmed from Apple that Steve Jobs has indeed passed away today. Apple has updated their home page with a memorial image (below), and news and tech sites are already posting the facts, a history of Jobs’ successes and timeline for life and business.

For me, it’s a sad moment, as various Apple products have been part of my life – both professionally, for work, and for business, for so long, it’s hard to imagine them not being there. While my first computer was a Tandy, then Atari, then another Atari; I longed for a Mac when they first arrived, and eventually got a Mac SE/30. 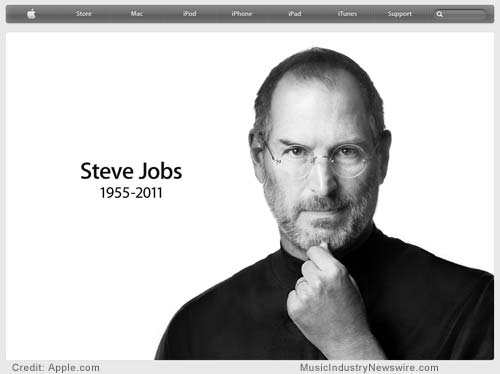 I was arguably one of the first people in So. Calif. with a PowerBook 100, the only person I knew in 2001 with an iPod, and bought an iPad the day it came out. I’ve had two or three additional PowerBooks (including 2011 Macbook Pro), a Mac Mini, iPod Touch, and have an 8-core Mac Pro in my music studio. And this week, I’ll finally get an iPhone. I learned Photoshop on a Mac; learned desktop publishing, web design, and so much more on a Mac … it’s right up there with my first time driving a car, first kiss, and losing my virginity. Hyperbole, perhaps, but Apple has always brought a “soul” to a box of what others see as a toolbox, a wrench, and Jobs was the largest part of that “feeling” you got … that “out of box” experience when you opened an Apple product box the first time.

I’ve been on the launch team of MacMall, have an ARPL design award from Apple, and my company sponsored QuickTime multimedia events more than a decade ago.

It’s hard not to be touched by the way Steve came back from his side ventures, rebuilt Apple with the iMac, developed a new vision for the company and with each new product doomsayers and haters would say “that won’t fly,” and then the product became a market dominator. Over and over. Not a fluke, not a lucky break, but vision. Steve had that. Yes, I am, or was, a fan.

And, one more thing. He will be missed.