The production is handled by Tha Beatco. production team headed up by Platinum producer / Re-mixer Crazy C. of such late nineties acts as Goodie Mob, Naughty By Nature, OutKast and Wu-Tang Clan to name a few.

The CD features the 1st single “After the Club” which features the vocals of the late Houston rapper Hawk and local R&B artist Dallas. The single has been getting massive airplay at local station KBXX and is top-3 in requests. The album also has cuts addressing the rumors that his label was financially broke after losing two of its high profile stars Paul Wall & Chamillionaire. 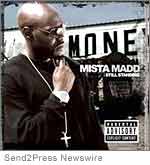 “I just wanted to streets to know that I and the label are Still Standing, we are still here and are as strong as ever,” stated Mista Madd in a recent interview. “There was a lot of controversy surrounding their departure, but it was amicable,” says Mista Madd.

Mista Madd sets out to prove that he is “Still Standing” which will be in stores March 27.

Mista Madd is a rap artist and the lead shareholder of Paid in Full Entertainment, Inc. (www.paidinfullentertainment.net), which has numerous titles in it’s catalogue, hot underground R&B artist Shei Atkins, and is responsible for the initial nationwide visibility of Paul Wall & Chamillionaire. Mista Madd can be heard weekdays on KBXX 97.9 The Box in Houston as the #1 urban Morning show Jock in the city Madd Hatta.