Blues guitar virtuoso Buddy Guy succeeds on every level from soul to sizzle to showmanship.

Sitting in his trailer before taking the stage for a festival performance, Buddy Guy is philosophical about his place in the pantheon of blues guitarists. “It was nice of Eric Clapton to say all those terrific things about me, but you know, I just go out on stage and try to make every moment the absolute best it can be. You can never make everything come out the best every time, but that’s what you aim for. You do what you can and have the most exciting show you can for the people who want to see you, but I know that most people don’t know who I am.”

“Everybody who knows anything about the blues knows Buddy Guy,” I tell him. “And the really neat thing about this is that we’re all happy we know you.”

Before he can reply, Randy Holland chimed in with, “I can top that!” Randy, along with co-promoters Rob Anderson and Ginger Greaves, was a driving force behind the Temecula Art Beat of Blues Festival, the event that was swirling around us.

As we sat there in the relative calm in the eye of the festival hurricane, Randy continued: “It goes beyond being happy to know you, man. See this?” He pointed to a rather long scar on his neck, pulling his shirt collar down so we could see the full extent of the hyper-pigmented area. “A few months ago, I was diagnosed with throat cancer and when I went in for the operation, I told the doctors, ‘Listen, I have to make it through this because I have to see Buddy Guy play at the festival.’ And hey, I made it!”

Buddy Guy inspires that level of commitment in his fans. 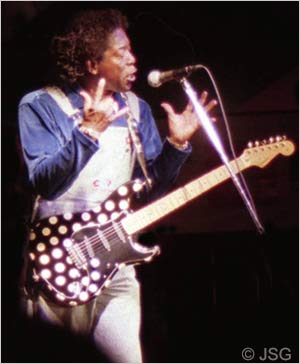 Less than an hour later, Guy and his band took the stage and delivered a performance that seemed as if it was dedicated to celebrating Randy’s defeat of The Big C. It was one of those shows that created its own conception of time. It was an entity unto itself that removed all thought of the outside world. The only downside to the show was that it flew by at amazing speed.

Guy himself was a marvel of dynamics, bent notes, stage presence, rockin’ blues grooves, and great old-fashioned showmanship. The main thing is that he played his polka-dotted Fender Stratocasters like they were extensions of his soul.

During several solos, just as things were really soaring, Guy brought the volume down, causing a delicious hush to fall over the crowd. Everyone sucked in their breath and leaned forward in their seats to be sure to catch every note. Then, at just the right moment, he smacked the tune back to full volume; the effect was marvelous and the audience erupted in joy every time, each response more effusive than the last.

Buddy Guy can coax almost any sound from his instrument. He caressed the strings and the guitar purred; he stroked them and the guitar roared; he manipulated them and the guitar screamed. In one solo, he tapped out notes and chords using a drumstick; on another solo, he used a coil of his guitar cable to bounce some sounds at us. He also churned and crunched a wailing solo while striding through the arena, eventually winding up in the Ladies Room (to the considerable consternation of the overly uptight security people).

When he returned to the stage, he introduced a new song, “I’ve Got a Problem,” and in illustration of the lyrics, a violently bent note snapped the high E string on his axe. Undeterred, Guy finished the solo playing on the remaining five strings. He then switched to a second polka-dotted Strat, this one with APC pickups (instead of the dreaded Lace Sensor pickups that used to be part of Fender’s Buddy Guy Signature Series guitar) and the tone was immediately brighter, bigger, richer, fuller.

Using some of his song titles to sum up a Buddy Guy performance, you’d have to list all these for a start: “A Man & the Blues,” “Let Me Love You, Baby,” “Damn Right I’ve Got the Blues,” “Nobody Understands Me but my Guitar,” “I Can’t Quit the Blues,” and “Stone Crazy.”

“This Guy can do anything with a guitar,” one listener exclaimed excitedly. I’m not even sure he was intending the pun but the observation works either way.