/MUSEWIRE – Music News/ — “ELECTRIC” by Sergio Sorrentino, produced by Rick Romano and distributed by RMN Classical, was recently released on Apple Music, Spotify, Amazon Music, and all the platforms. The album includes performances of works by renowned composers of today’s contemporary scene such as Steve Reich, John King, John Cage and Joji Yuasa, and will also feature four world premieres. 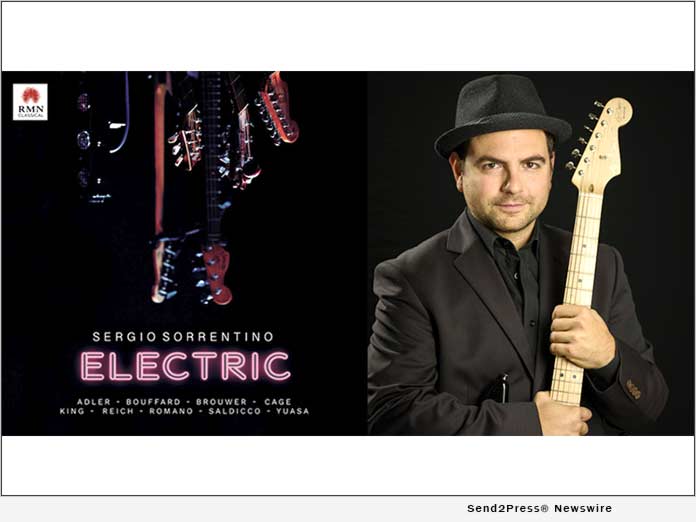 The works premiered on the album are “Electric Prelude,” by Sergio Sorrentino, “Glitch,” by Rick Romano, “Spire VI,” by Cesare Saldicco, and “Chase,” by Ayal Adler.

“Thanks to RMN Classical, I’ve been able to create ‘Electric,’ an album built upon years of research on the contemporary repertoire for electric guitar. This album contains a huge piece of my musical world,” Sorrentino says, “starting from my versions of masterpieces such as Steve Reich’s ‘Electric Counterpoint,’ and Leo Brouwer’s ‘Paisaje Cubano con Lluvia,’ passing through King, Cage, Bouffard and Yuasa, up to exciting new works dedicated to me by Romano, Saldicco, and Adler.”

Sorrentino started his international concert career very early and has held solo concerts and masterclasses in many prestigious festivals and venues around the world.

“The album is full of different styles; whose common thread is the richness of the guitar sound. Minimalism, new music, avant-garde music, electronics are all present. A piece of mine, inspired by ambient and drone music interlaced with field recordings, works as an introduction. It is an album that highlights and display many different sound experiences from the beautifully versatile electric repertoire,” Sorrentino says.

Over the years, Sorrentino has worked with composers and musicians such as John Russell, Machinefabriek, Steven Mackey, Andrzej Bauer, Marco Angius, Giorgio Battistelli, and numerous others.

“Sorrentino is an internationally-recognised performer committed to promote the contemporary repertoire for guitar,” RMN Classical music director, Romano, says. “His work, so broad and rich of many contemporary qualities, never fails to amaze, and we look forward to this much-awaited release.”

Sorrentino has recorded for an impressive number of record labels including RMN Classical, Mode Records, Rai Trade, Carish, and Curci.

His previous album, “Dream – American Music for Electric Guitar” (Mode Records), was reviewed and highlighted in the New York Times by Seth Colter Walls as one of the “Week’s Best Classical Music Moments.” RAI Radio Tre described Sorrentino as “…One of the most important contemporary Italian guitarists.”

For more information about Sorrentino: https://rmnmusic.com/sorrentino-sergio/

RMN Classical is a specialized label – part of RMN Music, and launched by composer-producer, Rick Romano, to promote and nurture the contemporary and sound-art music scene in all its ramifications, developing and producing original ideas and voices through a range of projects and releases, curating and nurturing an ever-growing catalogue of works and artists.

Its labels – RMN Records, RMN Classical – promote musical diversity through production, promotion and development of a variety of different projects including new album releases and events across a wide range of genres with no distinction of countries, age or background.