In the Mood Music – Cecilia Noel and the Wild Clams

MuseWire BOOK SERIAL – Ambient Deviant Speedmetal Polka: Chapter NINE – In the Mood Music — If you are fortunate enough to be exposed to the music of Cecilia Noel and the Wild Clams, one thing is certain: you will be moving your hips as they perform a wicked amalgamation of funk, salsa, soul, pop, Afro-Cuban and Latin jazz. And if that isn’t enough, their gigs are virtually guaranteed to put your partner in the mood. 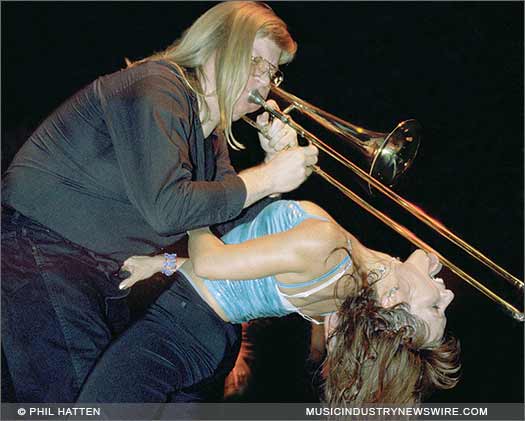 No matter how much you think you know about music, there always seem to be more delights awaiting you. Today’s example is the 16-piece rhythm machine known as Cecilia Noel & the Wild Clams, an outfit which combines beautifully-crafted arrangements and groove-laced improvisations, always performed with hard-charging excitement.

From the opening notes, they send the temperature rising. Not just in the sense of producing sweat, although that happens, too. But I’m talking about “hot.” As in carnality, fleshly pleasures, and the feeling that amatory coupling is coming soon. Their songs are constructed to push you, pull you, and prod you to multi-genre glory: the sensuality of soul, the steaminess of salsa, the power of pop, the fun of funk, and the multi-beat excitement of Afro-Cuban and Latin jazz. That it all blends so smoothly is testament to the superior skill level of the musicians, all of whom clearly love what they do.

For the Peruvian-born temptress and lead singer, music is dance and dance is music and music is sex and … You get the idea. Her songs represent physical sensations and in her view, you absolutely must surrender to those sensations. Even when she alternates between English and Spanish lyrics, there is no doubt about the ultimate goal of the song: “Tonight,” she is saying, “there are going to be bodies in motion.”

There is great beauty in the vocals of Noel, a world-class artist who has the ability to make her voice sound delicate, radiant and lovely while also appearing larger-than-life. The effect is truly awe-inspiring, and even those of you who do not like Latin big band sounds owe it to your soul to let Noel’s magnificent voice sweep over you at least once in your lifetime.

Be aware that there is some sort of secret ingredient in her music that can make it addicting. I went to see her a year ago and I’ve seen her nine more times since then. Many of the same numbers have remained in her show, but the arrangements keep changing and the improvisations from her musicians are consistently razor-sharp.

Dancers took the time to tell me, “Some people just don’t get how great this is!” True enough, there are folks who can’t or won’t allow themselves to open up to the fun, to go with the groove and get things moving. But those who love it are all on board with the Clams because they play like a well-lubricated engine that pulsates, percolates, boils, bubbles and races all over the place.

Some club stages could barely contain all the players: Her big band begins with a handful of percussionists, each with an expert touch. Then there’s a gorgeous gaggle of back-up singers, each good enough to solo as vocalist or dancer. Add supple yet powerful bassists, dynamic keyboardists, a horn section that wails, and soul and/or rock guitar work, often by a totally wonderful guest star. Plus, you often get to see singer and choreographer Toni Basil, who helps take the show totally over the top. (Basil is best-known for her recording of the Chapman/Chinn song, “Mickey,” but her work with Noel proves she is awesome in many ways.)

It is just so much fun to let the festivities take over, and it kinda-sorta goes like this: the place gets packed, the band starts playing, bodies start swaying, libations start flowing, hands start waving, and several million volts of electricity shoot all over the room. Everywhere you look, the hypnotic musical patterns are having their way with the gyrating bodies. You can see hundreds of smiling faces, many with slightly tranced-out eyes. Gotta dance! Gotta prance! Gotta move! Gotta groove! If those last six words describe what you’re looking for in an evening’s entertainment, you are going to want to attend a Cecilia show.

Cecilia Noel has a voice that can tame wild animals or turn human beings into beasts. She could probably just stand there and make you weep with pleasure, but she also puts on the kind of sexy performance that probably used to get nightclubs raided. Her stage presence is larger than life and twice as vibrant. She grabs you by the heart and teases your body. Or perhaps it’s the other way around.

Carmen Grillo (ex-Tower of Power) does the Guitar God thing on a couple numbers and it’s a shipload of nifty because he’s such a tasteful player. Eric Jorgensen takes a trombone solo that makes you think the ‘bone is a subtle instrument, which is no mean feat in itself, but doubly so since Noel is literally climbing up and down his body while he’s doing it. And the rhythm section is so in-the-pocket that they end up controlling your pulse.

Okay, I don’t keep a diary, but I sometimes write brief reviews in the form of diary entries. Like this one that I once had published in some cheesy rag like “MusicTownBuzz” or something like that:

Dear Diary: Went to a Cecilia Noel show with (NAME WITHHELD BY REQUEST). At 9pm, Cecilia sashayed out on stage in front of a huge bunch of bad-ass musical monsters, including Jeffrey Oswald on keyboards, Carmen Grillo on guitar, Lenny Castro on percussion, and Toni Basil on backing vocals (she also did the hot choreography for the SEXY girl singers in their sprayed-on outfits).

Seemed like the club filled up way beyond normal capacity in the blink of an eye, drawn in by the big beats from the band. These guys rock. In fact, these guys do everything: rock, funk, fusion, R&B, pop, soul, Latin. The crowd goes nuts! (Yes, I am using an exclamation point here; so sue me.) People dancing with partners. People dancing alone. People dancing with complete strangers. Impossible to stand still. Strong tunes. More big beats. Lots of dirty dancing on stage and in the audience.

At one point, Cecilia went over to the trombone player and she (CENSORED). And then she and the back-up singers (CENSORED). But that was nothing compared to when everybody (CENSORED). It was amazing. You have to see it to believe it! Also interesting is how people dress up for a Noel gig. You get to see a fashion show while you watch the bodies move. Super evening! Although the best part of the whole deal was later when I went to my girlfriend’s place and (CENSORED). Good-night, Dear Diary.

Having experienced their celebratory and incendiary live shows, it was with some trepidation that I placed their recording, “Delivery,” into the CD player. “There is no way,” I thought to myself, “that their sound – so big, so frenzied, and so captivating – could ever be captured in the studio and transferred to a home stereo system. NO WAY.”

“Delivery” is a lava-hot explosion of groove that kicks you in the butt and rocks you ’til you’re happily drenched. A delightful blend of Latin percussion, soul horns, funk guitar, pop melodies, and the kind of intricate musical inventiveness heard in the best jazz orchestras, the recording is a total gas.

The album opens with a one-two-three punch of “Opatereo,” “9060,” and “Dip It,” all very cool, percolating, and infused with sugar-throat smooth vocals that build to a rabble-rousing shout. That description can be applied to the whole album. Crowd-pleasing favorites like “Monkey” and “Crazy” are perhaps a bit tamer here than in Noel’s uproarious stage show, but this lets you revel in the sleek arrangements. Y’know, if that’s the kind of reveling you want.

By the time you get to the album’s striking power ballad, “Rain,” you can marvel at the emotion while your body rests. If your hips aren’t wobbly by this point, you’re probably not alive. At the conclusion of “Rain,” Noel’s voice echoes into the spaces of your mind . . . and then the bonus cut, “Axe…(The Power),” kicks in and you’re ready to rock all over again.

It’s impossible to credit everybody in a monumental endeavor like this, but here’s a shout-out to Eric Jorgensen for orchestrations that bring out the best in Noel’s excellent compositions.

Does the musical thrill ride slow down once in a while? Oh sure. On the occasional ballad, Noel sings sweetly, although always with power. But I think that her true persona is the delightful demon that emerges during her more plentiful up-tempo numbers. And together with her beautiful band, they easily storm through 90-minute sets that are the musical equivalent of witchcraft. Go see how their music fills the dance floor with people engaged in, um, let’s call it friendly interaction.

When the Wild Clams crank it up, you’ll see plenty of pelvic thrusting both during and after the show. In short, if you have a significant other whose motor you need to start, a Cecilia Noel performance is the show to see.

Cecilia Noel video of “Dip It” –