In Search of the New Punk

MuseWire COLUMN: Some of today’s rock music has excitement, power, and a terrific touch of sinful intent. But in addition to those things, Punk music had danger. By looking back, can we look forward to a rock resurgence? 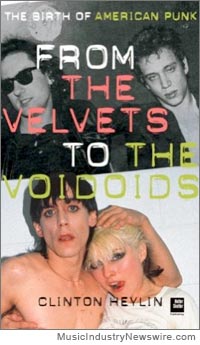 There are moments when music takes you by the hand, leads you down the garden path, and kisses you lightly on the lips. Punk had none of those moments.

Punk music was frenzy-on-a-stick. Hellacious and too full of fury to even acknowledge the haunted nature of many of the lyrics, punk grabbed three strong chords and churned up a firestorm of sound that blistered everyone within earshot. Sometimes it made do with two chords.

Did the punk movement die out? Depends who you ask. People who liked the original punk acts from the sixties and seventies would say the genre is gone and buried. People who like the crunchy pop of alternative rock bands that called themselves punk would say it is still alive and doing fine.

Punk lives on in all rock music with spirit, spunk, and savagery. Unfortunately, there are now lots of bands that use the term without living up to it in any way, shape, or form.

Who began punk, and when? Some say the Velvet Underground. Some say The Fugs. And lots of other candidates are suggested on ezines and message boards, like The Stooges, MC5, Sex Pistols, The Clash, and even, believe it or not, The Kingsmen because of “Louie Louie.” That last choice makes me grin even though I think it’s wrong on several levels.

However, quite a lot of people feel that it was first stirring about the same time as The Beatles began bringing pop-rock to a mass audience, which puts the start of the Great Punk Timeline at 1964.

In terms of lasting influence, there is no denying the work of the Velvet Underground. (Sure, let’s include the Brian Eno quote from decades ago: “Only five thousand people ever bought a Velvet Underground album, but every single one of them started a band.”) You can hear echoes of their work in hundreds of signed bands and thousands of unsigned ones.

Kicking it to Life

“The main American precursors of punk were the Velvet Underground, the MC5, the Stooges, the Modern Lovers and the New York Dolls,” writes Clinton Heylin in “From the Velvets to the Voidoids.” While that work is about ‘Murican punk music, he has strong opinions about the Brits as well: “Britain’s progenitors were the Sixties bands that combined a keen pop sensibility with ballsy rhythm & blues — the early Stones and Who, the Small Faces, the Yardbirds — and those glam bands who gave noise back to teenagers in the early Seventies — T. Rex, Slade and Roxy Music.”

Whatever you think of his choices, you must give him credit for nailing it when it comes to the Velvets, calling them “an amphetamine band — in every sense — loud, cynical, brutal and frenetic. They were not interested in mellowing out an audience.”

It’s the rush I remember best about punk music. Didn’t matter to me if the sounds were coming from Devo, Damned, Dictators, Suicide, Seeds, or Patti Smith as long as I got that adrenaline hit from the music.

I was happy with the raw crunch of the stuff, whoever was doing it, whatever their country of origin. And I’m not even very much concerned with who came first. But some folks keep trying to pinpoint it. In response, Lester Bangs said that “the Ramones did come before the Sex Pistols, you know, in spite of what everyone’s been told.” This was in a purported transcription of a recorded interview, but you can find his commentary in several books, including his biography of Blondie.

Blondie? Punk? Yup. As Heylin writes of The Ramones and Blondie shows in New York, “They began playing double-bills with Blondie, whose performance art was at the same rudimentary stage. The bands were also sharing an occasional gig at the Performance Studio, which despite its size could easily accommodate the Ramones’ and Blondie’s fans. Both of them.”

There are many ways to rock. Sometimes thrilling music seems all about the timing, those milliseconds of rhythm and beat that separate the mundane from the miraculous. In reports from the sixties and seventies scenes, punk bands are often described as playing out of time and out of tune but still creating magic, no matter how few folks were in the audience.

Sometimes it’s about the instrumentation and how it was deployed. Suicide had two people on synthesizers but were a monstrous band in any way you measure it except sales. The Ramones were awesome, too, but utilized the guitar, bass, drums, vocal format.

Sometimes it’s just an attitude. For the Electric Eels, notes Heylin, “violence was a central part of their aesthetic. It was not restricted to their shows, either, often carrying over to rehearsals.” Or: “The Velvets flirted with the effects of distortion and feedback, but the MC5 based their entire sound on them. They had consciously assimilated the precepts of free-jazz pioneers like Albet Ayler and John Coltrane…” and were playing those foreign sounds inside the big tent of rock ‘n’ roll. Heylin also points to The Stooges: “Their shows were a form of terrorist assault resonating deep into witnesses’ psyches.” (Aside: do you think Google will inform Homeland Security about the use of the word “terrorist” in that sentence?)

There is a specter hovering over the early punk bands, and that specter is heroin. Other than as the title of an early Lou Reed song, the word isn’t used much in Heylin’s book; he prefers such terms as “drug habit,” “drug dependency,” “junk habit,” “unhealthy mixtures of drugs and drink” (wonder what are the healthy mixtures of drugs and drink), and my favorite: “drug problem.” (Yup, time for the old joke: “I don’t have a drug problem. I take drugs. I fall down. No problem.”)

The punk aesthetic of the time put cannabis sativa off-limits, believe it or not. According to writer Charlotte Pressler, “The worst thing, the most totally uncool thing you could do in the early punk scene was smoke marijuana. But pills were pretty easy to get. You could get a bottle of a hundred Dexamyl and it didn’t cost that much.”

Were drugs the fuel of the rush I heard in the music? I hope not, but hell, it could be so. Have you ever noticed how Eric Clapton was a monster guitar player and stunning music creator when he was using drugs but a commercial sell-out ever since he got straight? Ever notice how Ray Charles was awesome when on the stuff but just kind of a show-biz glitz guy once he was off it? I’m just saying. (I look forward to your letters.)

The other constant factor in early American punk was a single venue. CBGB. Or, as it was originally named, CBGB & OMFUG, which stood for Country, Blue Grass, Blues & Other Music for Uplifting Gormandizers. Amazing is the only word for the groups that performed there. Imagine being in the club for shows featuring these artists, line-ups or pairings:

Television (the version with Tom Verlaine and Richard Hell)

As for Mr Hell, Heylin writes:

Before his first album had even been released, Hell had developed a — partially justified — reputation for espousing a dangerously nihilistic aesthetic. The author of ‘Love Comes in Spurts,’ ‘Hurt Me,’ ‘(I Belong to the) Blank Generation,’ and ‘You Gotta Lose’ could hardly be considered to paint an assuredly positive view of the world. Though Hell insisted at the time that he was searching for ‘a positive method for believing in the worth of life that doesn’t exclude the horror…’

For me, nothing else quite captured the sudden head-rush of punk music like X. Their debut album, “Los Angeles,” still works for me at any volume level, although loud is preferable. To me, they represented the West Coast neo-punk movement, of which Heylin writes:

In the summer of 1977 Los Angeles became the centre of one of the most unexpected explosions of communal inspiration in the history of rock & roll. At the Masque, a dingy basement off Cherokee Avenue, new bands rehearsed and began to perform. When the Masque was shut down by the fire-marshals at the beginning of 1978, two ‘Save the Masque’ benefits were organized at the Elks Lodge. These benefits, of 24 and 25 February, were the real beginning of the LA thrash scene. The bills included the Zeros, the Dils, the Germs, the Weirdos, the Dickies, the Plugz, the Flesh-Eaters and, way down on the second night’s bill, X.

Why am I writing about old bands? As a counter to so many of the new bands. Divas who sing ninety notes per line when six will do. Boys and girls who should be singing around campfires but are part of multi-million-dollar marketing campaigns developed to move merchandise and fast food, with music used as the vehicle of promotion. Crass commercial pre-programmed assembly-line “tune-like substances” that have all real music surgically removed.

Hey, I’m nostalgic for something that hasn’t happened yet. I want the rush back. Sure, I like a lot of music from the past. But I want to hear more music of the now. Are there good new bands that have that magic? Sure. Mindless Self Indulgence. The Birthday Massacre. Justice. To name three in various styles/genres. Or try any of the albums by The Blood Brothers for some crunch (they have disbanded, with members forming Jaguar Love and Past Lives, which I’m looking forward to hearing).

But embracing the New doesn’t mean abandoning what came before. You can still enjoy the speedball freakiness of the Velvets, even while acknowledging that almost everything they did has been co-opted by seemingly several million other musicians.

And unfortunately, the effect of punk music has been blunted by too much time. Scene: my local grocery store. It’s a lazy weekday afternoon and most of the 18 aisles are empty of customers; also, most of the staff seems to be doing whatever it is that they do “in the back.”

Put me in a wheelchair, get me on a plane

By that time, I’ve joined in with the band while doing that thing where you run-three-steps-and-leap-onto-the-shopping-cart and I am careening past all eleven thousand brands of breakfast cereal singing “Twenty, twenty, twenty-four hours to go, I wanna be sedated…” Moving way too fast, I reach the intersection of the aisles and drag one foot to pull me around the corner. In the flutter of an eyeball, I see someone coming the other way, his cart moving fast like mine.

Foiled in our attempts to be the Formula One Champions of the Chain Grocery Store, and not wanting to vie to be the Survivor of the Shopping Cart Destruction Derby, we both leap off our carts, pull up short, point at each other portentously, and we both —

Keep singing: “Nothing to do, nowhere to go-oh-oh, I wanna be sedated!”

Yup. The Ramones. “I Wanna Be Sedated.” Stoopid good fun! But I am still open to the next songs that are gonna give me that experience.

“Beginning at the Beginning: A Timeline of Punk Music History”
http://punkmusic.about.com/od/punk101/a/punktimeline.htm

The Ramones, “I Wanna Be Sedated”

Article is Copr. © John Scott G, and originally published on MusicIndustryNewswire-dot-com before the site was revamped as MuseWire.com in March 2015 – all rights reserved.