Eventide has announced that its popular Blackhole reverb plug-in is now NKS-ready — reconfigured to support Native Instruments’ Native Kontrol Standard extended plug-in format for use with MASCHINE and KOMPLETE KONTROL keyboards and software — as of April 18, 2018. This famed, massive reverberator first saw the light of day as an algorithm in the rackmount DSP4000 and remained a favorite in the rackmount H8000FW. For decades studio engineers considered Blackhole their “secret weapon.” 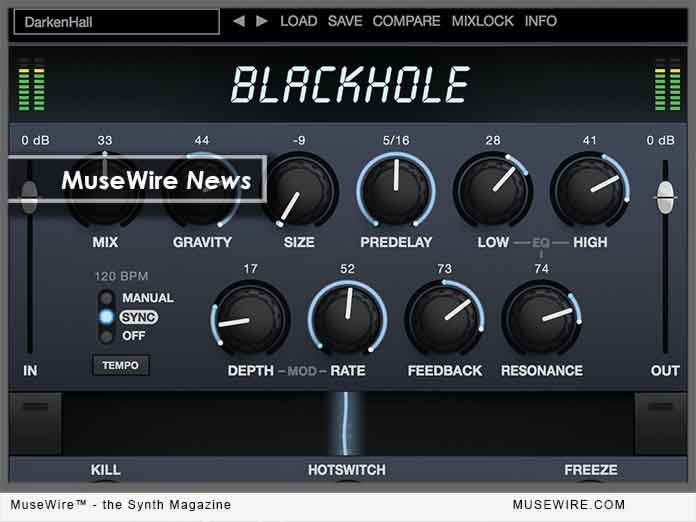 As reflected in its updated GUI (Graphical User Interface), Blackhole is part of Eventide’s H9 Plug-In Series designed with live performance in mind. The Ribbon control can be mapped to any combination of parameters giving a performer a single control over a world of effects. Integration with the NKS platform makes the Ribbon an integral part of the performer’s instrument.

Blackhole was designed to give you extensive control, allowing you to craft your own signature sounds. Included with Blackhole is a carefully curated set of 50 presets that serve as a launch pad for your explorations. These presets cover spaces as small as a room and as large as space itself.

According to the company, “Whereas most reverbs are constrained by the physics of the real world, Blackhole creates virtual spaces that could never exist in reality. It can turn a simple drum track into an otherworldly rhythm section. Capable of creating epic soundscapes, space-warping special effects and drones, Blackhole can cover spaces as small as a room and as large as space itself.”

“We couldn’t be more thrilled to have Eventide, a brand famous for their high-quality, creative FX, on the NKS platform and deeply integrated into our KOMPLETE KONTROL and MASCHINE eco-systems,” says Native Instruments’ Ray Chemo.

“We’re delighted to add our ‘special sauce’ to Native Instruments’ eco-system,” enthuses Eventide Software Developer Tom Longabaugh, continuing: “It will be exciting to discover ways in which Blackhole will be used in both live performance and in music production by a community of artists who have yet to discover the universe of effects that we’re known for.”