LOS ANGELES, Calif. — As befits anything from an album by DJ Insane and The G-Man, the first music video is one of the strangest ever posted online. The opening track, entitled “Trans Addiction,” from the U.S. album CRAZED + DAZED (Delvian Records, UPC 6-75604-10252-0), has prompted an advertising copywriter in India to use open source film footage by an avant-garde German director to create the “Trans Addiction Wine Symphony.”

Black-and-white images of stark intensity show three men doggedly and compulsively sliding their fingers around the lips of wine glasses. The effect is maddening or soothing, outrageous or humorous, depending on your mood. 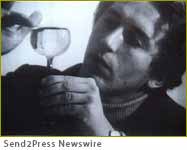 Reaction to the video has been mixed, to say the least. “I find it compelling and strangely arousing,” says Matthew Barber, the Tony-nominated playwright of “Enchanted April.”

Other responses have included “Hypnotic,” “Strange,” “Unusual,” and “What the hell was that?” And at least half of the general public who view the video appear to be offended by it.

The video is available on several sites, including The G-Man’s MySpace and TagWorld pages, as well as YouTube:

Credits for the video are as follows: The song is “Trans Addiction” by DJ Insane and The G-Man, from the album CRAZED + DAZED on Delvian Records. Video Concept and Production is by Sunil Shibad. The film director was acclaimed film poet Lutz Mommartz.

With a nod to the actions of the 3 men in the story, on some sites the posting is called the “Trans Addiction Obsessive-Compulsive Behavior” video.

For more information, contact G-Man Marketing, 818-223-8486. Visit http://www.gmanmarketing.com for more on the artist.