Lindsay Ell is headlining the final Monster Energy Outbreak Tour of 2018. Lauded as “one of the most exciting and talented young artists in country music” (Forbes), Lindsay Ell is a triple threat: accomplished musician, unique vocalist and songwriter. Her first full-length album, “The Project,” debuted at No. 1 on the Country Album Sales Chart in August 2017 and was lauded as Billboard’s “Best Country Album of 2017.”

Tickets go on sale starting on September 7 at outbreakpresents.com and lindsayell.com. 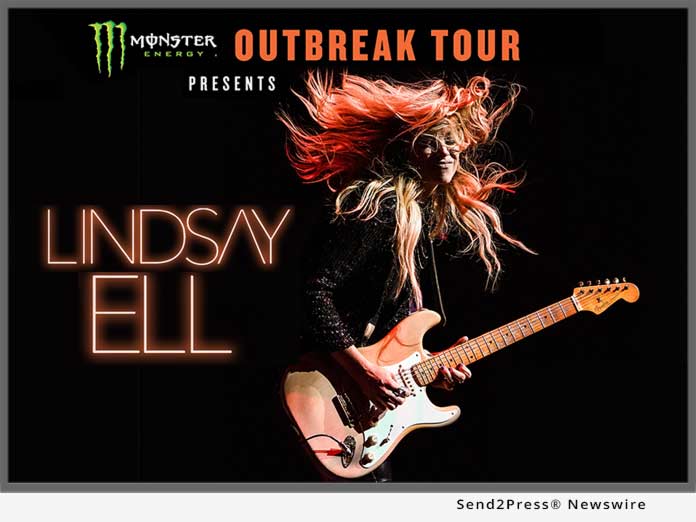 Following her breakout Top 20 hit at U.S Country radio and momentous No. 1 at Canadian Country radio with “Criminal,” Ell recently excited legions of fans via social media announcing her next single is the tantalizing and lyrically-mesmerizing “Champagne.” A song critics praise “demands your attention” (Taste of Country), “Champagne” officially hits airwaves in the U.S. on September 17.

Ell is currently supporting Sugarland’s Still The Same Tour and will soon join Keith Urban’s Graffiti U World Tour for select dates this fall before embarking on her Monster Energy Outbreak Tour headline run. Additionally, she is an Album of the Year and Female Artist of the Year nominee at the 2018 Canadian Country Music Awards, taking place in Hamilton, Ontario, Canada later this month.

“I’m so excited to be teaming up with the Monster Energy Outbreak Tour for my first headlining run ever,” Ell said. “It’s going be a show we’ve never done before and I can’t wait for fans to see it!”

ABOUT OUTBREAK PRESENTS:
Launched in 2011, the Monster Energy Outbreak Tour is recognized as the ultimate influencer, pairing breakthrough talent with fan friendly ticket prices at premium venues, giving fans the opportunity to witness the stars of tomorrow, today. The Monster Energy Outbreak Tour is the largest national touring brand in the club & theater space, and currently consists of five annual music tours (Hip Hop, EDM, Rock, Country, College), one annual comedy tour, and the buzz-worthy Outbreak House at SXSW. Outbreak was created to provide a powerful platform for emerging talent to maximize their breakout moment. Notable alumni include Kendrick Lamar, Macklemore, The Chainsmokers, Carnage, Bullet For My Valentine, Cole Swindell, Garfunkel & Oates, Fetty Wap, and 21 Savage; to name a few.

ABOUT MONSTER ENERGY:
Based in Corona, California, Monster Energy is the leading marketer and distributor of energy drinks and alternative beverages. Refusing to acknowledge the traditional, Monster Energy supports the scene and sport. Whether motocross, off-road, NASCAR, MMA, BMX, surf, snowboard, ski, skateboard, or the rock n’ roll lifestyle, Monster Energy is a brand that believes in authenticity and the core of what its sports, athletes and musicians represent. More than a drink, it’s the way of life lived by athletes, sports, bands, artists, believers and fans.