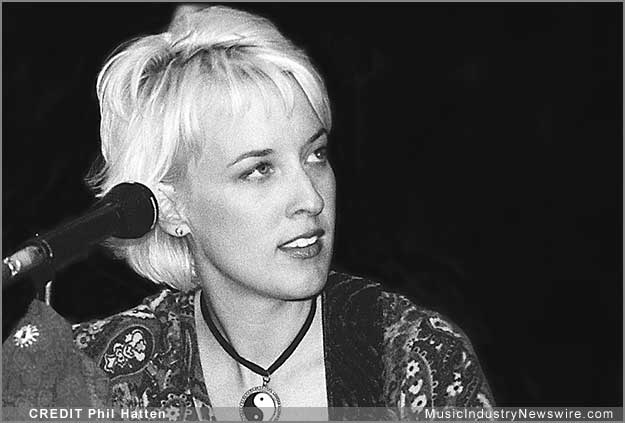 ARTICLE: Taking a ride on a cosmic wave of positive energy is a joy that special performers offer. Here are some notable examples of artists who provide transcendence within the forms of popular music.

Some musicians seem to provide their own light. Larisa Stow is someone whose on-stage persona contains a million watt beacon. While her vocals are quite lovely, the force of her talent can make you think hers is the prettiest voice in the world. In other words, a spell is cast when she sings. Such is the power of her commanding presence that during the quieter moments of a set at The Gig you could sense an elegant tension in the room as people began surrendering to her every syllable. Stow infuses many of her lyrics with sacred imagery and then performs her songs with an ardor that provides listeners a jolt of soul-voltage. She touches the very core of your humanity and can frequently get you to dance at the same time.

As is often the case with strong and independent lead singers, the band members change from time to time. Here are my notes from the morning after one of her shows: David Del Grosso, on acoustic-electric guitar, plays with a passion that befits the waves of emotion coming from Stow. His chord choices are consistently exciting. Matthew Basile, bass, dances with his instrument, which is fitting since he provides a groove-happy bottom to the songs, wonderfully supporting the melodies and interacting perfectly with Christopher Pellani’s spot-on drumming and enticing percussion. Timothy Chen coaxes wonderful tones from his guitar while utilizing an assortment of effects that skitter in, over, under, and around the tunes. Diana Lorden contributes a delightful arsenal of great sounds with her keyboard and electric violin, and often adds gorgeous harmony vocals.

Here are my notes from the morning after a different show: When Larisa sings, the room is made pure and hearts are suddenly young and full of hope. With her inspirational material, each venue she enters becomes a house of worship. In a recent appearance, she kept a standing-room-only crowd enthralled for a two-hour show. Sharing in this musical grandeur were Marti Walker (harmony vocals and flute), David Del Grosso (guitar), and Christopher Pellani (percussion). Walker is the most sympathetic backing vocalist I’ve ever heard, and her flute work could lead a jazz group. Del Grosso plays with the driving beat of a funk-rock star, yet with such tenderness that it seemed as if his instrument was vocalizing. Pellani takes the craft of drumming to new levels of artistic expression. Together, these musicians expand the concept of melody and rhythm.

The bottom line of seeing Larisa Stow and her band is a natural and ethereal high. Like encountering a genuine sorcerer, you see it but you just don’t believe it. And then the waves of positive emotion hit you and you surrender to the cosmos.

Chris Pierce doesn’t just sing; he mesmerizes. With a huge, expressive voice and a fearless attitude that enables him to repeat phrases in different patterns to great effect, Pierce is thoroughly compelling. You have no choice but to let the songs come up and dance with you. The beat is evil, the words poetic, and the music richly fascinating. Solo, he’s magnificent; with a band, the experience is a delicious conglomeration of funk and roll, rock and dance, bop and soul.

“We’re going to call down some angels tonight,” Jillian Speer said to an enthusiastic crowd at The Gig on Melrose. And that is precisely what happened. With a beautiful voice and the kind of material that makes you see heaven, Speer was simply outstanding.

Her music is a blend of spirituality and sensuality, and her group performs as a level of perfection that is unusual even by classical standards. Speer’s voice is pretty and rich and her group’s synchronized and layered vocals make the hairs on your arms stand straight up. You get one of those “oooooooh” feelings every time Speer’s voice combines with Liane Paquette’s. Philip Francinni plays beautiful lines on guitar while Lou Wilson’s congas and Keith Lewis’ bass propel the music to even greater thrills. Don Borrozo adds muted trumpet to the swirling melodies and the whole thing becomes a form of hypnosis.

If you want a visual equivalent for the music of Jillian Speer, find yourself a body of water, approach it after nightfall, shine a light on the surface, look at the reflections through a pair of binoculars, and then have a friend splash the water. The resulting detonation of shards of light will get you close to the intriguing intensity of the sound of Jillian Speer.

Glancing around the room during her songs, you could see seraphim dancing beside hipsters while over at the bar cherubs were smiling at lovers who were falling into each others’ auras.

Two-part harmony is nice but three- and four-part harmonies increase the possibilities for aural pleasure. All of which Dakota Moon pulls off with ease in tunes that are both pristine and propulsive. Drenched with gospel fervor and fueled by a love of rock ‘n’ roll, Dakota Moon can gather you up, bounce you around, and scoot you to the dance floor with any one of their three-minute pop symphonies. Then they do it again. And again. All night long.

It’s tempting to call what they do “feel good music,” and it is an apt description, but it doesn’t go far enough in explaining the power of their performance. Dakota Moon songs are so beautifully crafted and so heartfelt that this band is often in another realm from the rest of us.

The music being made by the brand-new Shannon Moore Band at the Temple Bar was by turns inspiring, regal, groovy, and hot. Moore’s songs all have emotional resonance and heart-stopping turns of phrase that kept her one-hour set lively. The woman also has a set of pipes that can land with the force of a ball-peen hammer but then just as easily turn into the caress of a butterfly’s wings. Recently recovered from a near-fatal car crash, Shannon Moore moved from that private hell to show us she is one hell of a performer. Some artists give you less than you expect; Moore gives you more.

This original article is Copy. © 2012-2013 by John Scott G, and originally published on MusicIndustryNewswire-dot-com before the site was revamped as MuseWire.com in March 2015 – all commercial and reprint rights reserved. Photo of Larisa Stow by Phil Hatten.