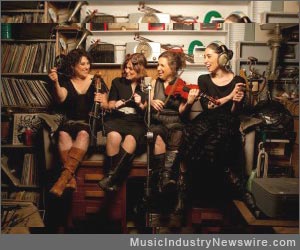 WASHINGTON, D.C. (MuseWire) – The U.S. Department of State’s Bureau of Educational and Cultural Affairs, in partnership with American Voices, announced that the San Francisco-based chamber group Real Vocal String Quartet will tour Europe over the next month. They will travel to Azerbaijan (November 18 – 23), Macedonia (November 24 – 29), Bosnia and Herzegovina (November 30 – December 5), Latvia (December 6 – 11), and Lithuania (December 12 – 16) as part of the American Music Abroad series.

To promote cross-cultural understanding through music, this season’s 12 participating American Music Abroad groups were selected from a pool of nearly 300 applicants to travel to more than 40 countries. The 2012-2013 season will feature a variety of American musical genres, including urban/hip-hop, bluegrass, country, Americana, classical/jazz, rock/blues, and Hawaiian slack key guitar/hula.