Book Review: Blood on the Sand in ‘Lawrence in Arabia’

Spies! Treachery! Deception! Camels! With an eye for detail and a love of intrigue, Scott Anderson plunks you down in the desert for ‘Lawrence in Arabia’ (ISBN-13: 978-0385532921). The author unleashes a rip-snortin’ tale that ultimately reveals a lot of the backstory on the muddle that is today’s Middle East. 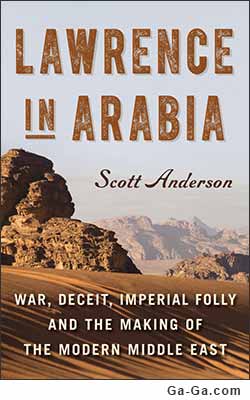 Thomas Edward Lawrence is mostly known from the 1962 David Lean film starring Peter O’Toole. It is a visually splendid work and rightly admired as a kind of intimate epic but even with a nearly four-hour running time a great many incidents had to be compressed, omitted, or glossed over. Scott Anderson, an author equally well-regarded for his fiction and non-fiction writing, provides the details in a work that is equal parts biography and military adventure. Either way, it’s a real page-turner.

With all the blood and death amidst the sweep of the adventures, you wouldn’t think that the proceedings could get amped up much further, but you’d be wrong. Anderson utilizes an aspect of the cliffhanger style of early serials, often ending sections like so:

In July 1915, the war was not yet even a quarter done; there were still more than three years of slaughter and ruin ahead. But the seeds for Lawrence’s own dramatic role in that conflict were just then being sown. Those seeds were born of two seemingly disparate events: the arrival in Cairo of a strange letter secreted out of Mecca, and the crossing of an enigmatic twenty-four-year-old man over the torn and shell-pitted no-man’s-land of Gallipoli.

He then jumps to another part of the unfolding saga and returns to those “seemingly disparate events” several pages later. This “what will happen next” approach suits this story; after all, everything takes place amidst the danger of nation-states at war in a region packed full of tribal and religious hatred. Along with the tension resulting from spy rings, inept battlefield commanders, and double-crosses galore, the scope of the war is almost always on one’s mind. The carnage in WWI was astounding — a half million killed or wounded in the action at Gallipoli alone. And we haven’t even mentioned the Arabian theater of war’s suffocating sandstorms, snakes, and plagues of locusts.

Early on, Anderson gets to the perplexing aspect of his subject:

Lawrence, the great defender of the Jewish people or the raging anti-Semite? The enlightened progressive striving for Arab independence or the crypto-imperialist? Lawrence left behind such a large body of writing, and his views altered so dramatically over the course of his life, that it’s possible with careful cherry-picking to both confirm and refute most every accolade and accusation made of him.

Throughout his letters, military correspondence, and his massive autobiography, “The Seven Pillars of Wisdom,” Lawrence made a huge number of statements, observations, and predictions. Many were self-contradictory and some were flat-out wrong but one was startlingly accurate: “if a Jewish state is to be created in Palestine, it will have to be done by force of arms and maintained by force of arms amid an overwhelmingly hostile population.”

While T.E. Lawrence is obviously the central figure in the book, you will also be pleased (and sometimes astounded) to encounter numerous colorful officers, soldiers, tribesmen, warriors, politicians, scoundrels, thieves, and mountebanks. If nothing else, “Lawrence in Arabia” introduces you to many larger-than-life but nonetheless real-life characters, including:

Aaron Aaronsohn, who established “an extensive spy ring across the breadth of Palestine” and who would eventually “play a signal role in promoting the cause of a Jewish homeland.”

Faisal — or, more accurately, Sheikh Faisal ibn Hussein, son of the religious leader of the Muslim holy cities of Mecca and Medina and a man who achieved the amazing feat of uniting “thousands of men representing nearly every tribal group across the breadth of the western Hejaz” (a strategically important area along the Red Sea that is now part of Saudi Arabia).

Curt Prufer, “the young German scholar who, donning the camouflage of Arab robes, would seek to foment an Islamic jihad against the Western colonial powers, and who would carry his ‘war by revolution’ ideas into the Nazi era.”

William Yale, “a fallen American aristocrat in his twenties, who, as the only American field intelligence officer in the Middle East during World War I, would strongly influence his nation’s postwar policy in the region even as he remained on the payroll of Standard Oil of New York.”

Actually, there are lots of reasons, beginning with the aforementioned problem of it being an area of nation-states at war in a region full of tribal and religious hatred. Here is a telling passage commenting on William Yale’s top secret report in which he asserted that the Arabs were in too much of a muddle to wage war against the German allies, the Turks: “With that dispatch,” Anderson writes, “he was establishing a tradition of fundamentally misreading the situation in the Middle East that his successors in the American intelligence community would rigorously maintain for the next ninety-five years.”

But few nations helped the situation very much during WWI or after. For example:

Given the chaos of war and the difficulty of communications, different branches of the British government negotiated with different wartime allies — or with parties they hoped to turn into allies — with no one realizing until too late that the agreements thus forged might conflict with one another.

Although that passage was directed at the British, there is plenty of blame to go around considering the actions of the USA, France, and others. Oh, and while Anderson gives the Brits an “out” in that section by stating that “It was not a matter of duplicity, but rather a regrettable instance of the right hand not knowing what the left was doing,” the sad fact is that there were plenty of examples of duplicity, the greatest of which was the dichotomy between two British-instigated arrangements: the McMahon-Hussein Correspondence (recognizing Arab independence) and the clandestine Sykes-Picot Agreement (carving up the Middle East for France and Great Britain two years prior to the end of the war).

There was also the teeny-tiny matter of a handwritten note between British Foreign Secretary Arthur Balfour and British financier Walter Rothschild which stated that England favored “the establishment in Palestine of a national home for the Jewish people, and will use their best endeavors to facilitate the achievement of this object.” As Anderson points out, the controversy resulting from Balfour “continues to haunt the world to this day.” With Sykes-Picot, the Balfour Declaration, and a whole host of broken or half-fulfilled promises, the West has been paying for their mistakes ever since.

Whether you read “Lawrence in Arabia” for biography, history, politics, or even to revel in the glory/horror of war, you will be in for a treat.