Peeling back the thick tapestries of privacy shielding the odious Koch brothers, Daniel Schulman’s “Sons of Wichita: How the Koch Brothers Became America’s Most Powerful and Private Dynasty” (ISBN: 9781455518739) is consistently compelling and a good read. There’s a lot here: the Koch’s anti-American politics, their disgusting waste of personal wealth, their in-fighting and lawsuits, their dysfunctional family life, and their attitude of total warfare against people in the middle class. Spoiler alert: the Koch’s malevolence is still on the march. 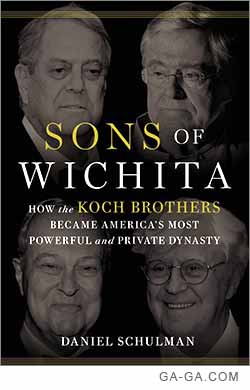 Descriptions of evil can be fascinating, so readers will be riveted by Daniel Schulman’s biography of all four of the disgusting Koch brothers, Charles, David, Bill, and Frederick, with some time given to their loathsome father and the socialite-slash-party-hostess he married.

The book is fast-paced and compelling, yet it makes for a difficult review to write, not because of the book itself which is an assiduously researched uncovering of the scandalous Koch clan, but because the central figures (Charles and David Koch) are so disgusting — here are two US citizens who have become among the wealthiest people in the world and they spend a significant portion of their money trying to destroy the basic tenets of the American system of government.

Rotten Fruit from a Rotten Tree

Charles and David come by their cuckoo ideas naturally — their cold and distant father, Fred Koch, was one of the founders of the John Birch Society, an organization so vile that it was even rejected by William F. Buckley in the pages of National Review, the rightwing hate rag. Consider how detestable an organization must be in order to merit a disavowal by a crypto-Nazi like Buckley!

As paterfamilias, Fred Koch was rigid and unfair to his sons when he paid them much attention at all. Repeatedly forcing his sons to don boxing gloves and pummel each other may help explain the pugnaciousness of his litter. “Bill recalled a Lord of the Flies-like childhood, in which his parents frequently left him and his brother in the care of the household help ‘to grow up amongst ourselves,’ while Fred traveled the world tending to his business empire and [mother] Mary either accompanied him or was out of the house at cocktail parties or society events.”

Small wonder that some of the fond memories from their middle school days involved sneaking up on dating couples in order to toss cherry bombs at them. Then, “Cackling maniacally, the boys peeled off in the night looking for more couples to terrify.” Yes, there’s nothing like tossing explosive devices at innocent people to help you enjoy life.

Hypocrisy is as Hypocrisy Does

The duplicity that is typical of conservatives runs deep through the veins of all of the Kochs but especially with papa Fred, a man so deathly afraid of Communism that he tried to harm America by battling the imagined shadows of the Kremlin, yet his oil firm did extensive business in — you guessed it — the Soviet Union. He personally spent so much time there in his pursuit of millions that Chapter Two of the book is entitled “Stalin’s Oil Man.”

Crazy crackpot canards are scattered throughout the chapters and you laugh, wince, or retch upon encountering them. This is especially true of the section on the outlandish “Freedom School” run by professional dingbat Robert LeFevre, who, between publishing Holocaust denial propaganda,was the radical espouser of autarchism, otherwise known as libertarianism. There is a ten-page section of the book devoted to Charles Koch swallowing the swill brewed up by LeFevre and his addlepated acolytes.

Among the ominous horrors that the Kochs have visited on America is the founding of a propaganda network to rival that of Hermann Goebbels during the Third Reich. This began nearly four decades ago when Charles Koch hooked up with Ed Crane and Murray Rothbard, two libertarian kooks who crawled out from under the rocks of the Barry Goldwater campaign: “The Cato Institute opened in early 1977, with Crane as its leader, Rothbard its intellectual muse and top scholar, and Charles the organization’s wallet.” Thus began what has come to be known as the Kochtopus, a vast rightwing conspiracy of fake research organizations with tentacles reaching into Washington, statehouses, colleges, schools, civic organizations, and more (see partial list below).

As the years of Koch deceit and dishonesty swept past, there have been some interesting results: “Koch Industries had managed to run afoul of agencies ranging from the Department of Energy to the Internal Revenue Service. The company faced not just civil penalties, but criminal prosecution.” A lawyer for Koch Industries noted that “If this were a public company, all the officers and directors would be in jail.”

According to a Senate committee report, Koch Industries engaged in

“a widespread and sophisticated scheme to steal crude oil from Indians and others through fraudulent mismeasuring and reporting.” Based on documents subpoenaed from Koch, the committee reported that the company had stolen at least $31 million worth of oil in the previous three years alone.

But there’s more. Koch Industries was found “guilty of nearly 25,000 false claims against the government;” the company “pleaded guilty to an array of environmental infractions;” was fined “for illegally dumping a million gallons of ammonia-laced wastewater and spilling some 600,000 gallons of fuel into a wetland; and agreed to pay a $35,000,000 fine under the Clean Water Act.

But there’s more. The horrifying deaths of two people from faulty Koch pipelines is examined in details that will make you squirm in your chair. That episode ends with a $296,000,000 verdict against Koch, at the time the most massive wrongful death award in American history.

Often seeming like a steel-hearted documentary about a family of ritual killers is the chapter entitled “Out of the Shadows.” The ramping up of corporate-funded anti-American activities by Charles and David Koch is a sort-of “Wichita Chainsaw Massacre” with the two Richie Rich dweebs thrusting “millions of dollars into hundreds of universities around the country. These contributions — which totaled nearly $31 million between 2007 and 2011 alone — have gone to endow professorships, underwrite free-market [unregulated] economics programs, and sponsor conferences and lecture series.”

Kochisms are loved by members of the tinfoil hat contingent, which includes republicans, libertarians, and conservatives of all stripes and odors.

Enemies of the United States give huge thanks to Charles and David Koch for funding one of the most anti-American movements in our recent history, the Bagger Brigade. The contemptible Tea Party — sometimes called the American Taliban, sometimes called Americans for Prosperity for the Wealthy — only exists due to the check-writing of the Kochs.

Bagger goals include the dismantling of American government and destruction of the American Dream; their chosen methods of bringing the USA to its knees include two devilish prongs: (1) the election of rightwing nutjob douchebags like Rand Paul, Sam Brownback, Ted Cruz, Nikki Haley, and John Kasich; and (2) the dissemination of lies, distortions, half-truths, and prevarications on a massive scale. If you have read an actual newspaper or watched a real news program in the past couple of years, you are aware of some of their success in spreading misinformation.

In addition, “Foundations connected to the brothers had, in the three-year stretch between 2005 and 2008, directed nearly $25 million to dozens of conservative think tanks [sic], policy institutes, and advocacy groups that had challenged the existence of global warming.”

In reality, the group acted as an ATM machine for dozens of conservative advocacy organizations. More than $200 million gushed into the nonprofit… The nonprofit formed one link in a daisy chain of trusts, LLCs, and nonprofits through with Koch network cash circulated en route to its final destination — one of any number of conservative political groups that included Americans for Prosperity, the Tea Party Patriots, the 60 Plus Association (a kind of right-wing counterpoint to the AARP), and many others. This elaborate system was designed to make it nearly impossible to trace contributions to their source.

There are LOL moments in the book, such as in Schulman’s description of commercials created by Koch group Americans for Prosperity and run against congressional Democrats:

The spots, featuring a breast cancer survivor, suggested that these Democrats supported a government-run health care plan that could end up costing Americans their lives by denying mammograms to women under the age of fifty. These ads were rife with falsehoods — but they didn’t have to be true to be effective.

“They didn’t have to be true to be effective” is the best description ever of rightwing nutjob TV commercials. Theirs is the modernization of “The Big Lie” theories of public misinformation or propaganda.

Or take the deliciously funny understatement Schulman uses to describe one of the most unfit candidates for higher office in modern history:

Thanks to the Tea Partyized atmosphere, Romney — a historically moderate, Northeastern Republican whose health-care reform effort in Massachusetts formed the inspiration for Obama’s — was running on a “severely conservative” platform. Doing so forced him to engage in the kind of political contortionism that made it seem like he was willing to say anything to get elected.

Any political policy, group, or candidate funded by Koch money is immediately suspect of pursuing policies detrimental to the majority of Americans. Because of their perfidy, it would be helpful to avoid any pronouncements emanating from RWNJDBs (rightwing nutjob douchebags) who are identified with an “R” following their names.

But Koch money props up a large number of know-nothing fake think tanks so it would be advisable to shun any “information” springing from such Koch front groups and WOT (way out there) crazies as:

and…  I’m tired of typing but the point is that when you hear one of the mouthpieces for libertarianism or conservatism or republicanism mention a “study” or “research” or “findings” or “reports” from a “think tank” and you go look it up, you’ll find that their data is screwy and it emanates from one of those phony money-driven groups — organizations that are the R&D equivalent of whores.

The Koch’s recent history is appalling:
Charles and David brought their political resources to bear as never before during the 2012 election, which Charles called “the mother of all wars.” Yet they emerged from the crucible of the campaign having gained little more than a reputation as cartoonish robber barons, all-powerful political puppeteers who with one hand choreographed the moves of Republican politicians and with the other commanded the Tea Party army. As with all caricatures, this one bore only a faint resemblance to reality.

The reality was much, much worse and America is the lesser for it.

For more information, visit the publisher’s website at: http://www.hachettebookgroup.com/titles/daniel-schulman/sons-of-wichita/9781455518739/ .

VIDEO: Daniel Schulman on All In with Chris Hayes: