PORTLAND, Ore. (MuseWire) – JoeCo Limited is now shipping the eagerly awaited BBR-DANTE™ version of the BLACKBOX RECORDER. This latest addition to the multi-channel live audio recorder family is the successful result of a collaboration, announced during 2010, between JoeCo and Audinate, creators of the award-winning Dante digital media networking solution. 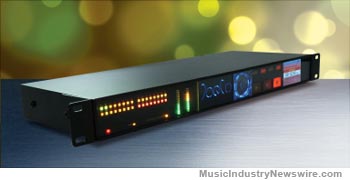 The BBR-DANTE is designed to record / replay up to 32 channels of audio data from a Dante network. Developed to solve the inherent problems of working with computer-based systems in a live performance environment, it provides engineers with a computer-free, high-quality solution for multi-channel live audio capture. Able to record up to 32 channels of audio at 44.1kHz and 48kHz directly to Broadcast WAV files on an external USB2 (FAT32 formatted) drive, the BBR-DANTE also accommodates higher sample rate recording (88.2kHZ and 96kHz) at a reduced track count.

The recorder connects to any Dante-enabled network device from a range of console and converter manufacturers. Designed to support standard network components and switches, it can also record 8 channels of analogue (balanced line in) alongside 24 channels of Dante for capturing audience and ambience. Individual channels, or pairs of channels can be monitored on an internal PFL bus providing both hi-resolution metering and headphone output. A number of standard BlackBox Recorder safety features are also included, such as the Safe’n’Sound Record Recovery, which will recover files even if the power fails in the middle of a recording.

Commenting on the success of the collaboration, JoeCo’s Managing Director Joe Bull said: “The Dante enabled system is a great addition to the BlackBox range. We are delighted to have been able to combine this exciting Dante technology with the robust, computer free solution that the BlackBox Recorder provides.”

“JoeCo’s ability to design this product while maintaining their attention to detail, and rapidly getting the new BBR-DANTE to market has been extraordinary,” remarked John McMahon, VP of Sales, Marketing and Support at Audinate. “Based on early market feedback, we are confident the BBR-DANTE Recorder is going to be an extremely popular product.”

About JoeCo
JoeCo is based near the beautiful university city of Cambridge in the UK. Established in 2007, the company’s research and development activity has focussed on its revolutionary BLACKBOX RECORDER, designed for capturing live multi-channel audio. Since the recorder’s release in 2009, JoeCo has won several prestigious awards including a PLASA Award for Innovation (UK) and a series of international awards from industry press, readers and trade associations including Best New Company, and Best Recorder. 2010 saw the release of the BLACKBOX PLAYER, the first dedicated multi-channel playback device specifically designed to replay backing tracks or multiple surround stems for live shows and themed entertainment.

About Audinate
Audinate revolutionizes the way that AV systems are connected by transporting high-quality media over standard IT networks. Using Audinate’s patented networking solution, digital media networking just got easy. Audinate’s solution has been licensed by customers across the AV industry and can be found in installations and live sound applications globally. Audinate is a Promoter Member of the AVnu Alliance™. Audinate offices are located in US, United Kingdom and Australia. Dante is a trademark of Audinate Pty Ltd