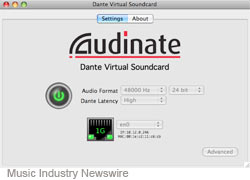 PORTLAND, Ore. (MuseWire) – Today, Audinate, the creators of Dante™ media networking solutions, have announced a special promotion for their popular Dante Virtual Soundcard software. The single seat license normally sells for $149.99 is now discounted 80% and can be purchased for $29.99 for a limited time.

The Dante Virtual Soundcard allows a PC/Mac to connect to a Dante audio network by using the Ethernet port on the computer to communicate with a network of other Dante enabled based devices. Popular DAW applications like, Nuendo™, Cubase™ and Logic™, Pro Tools™ can transmit and receive up to 64 bi-directional channels to networked audio equipment, or 32 channels with Pro Tools™ via the Dante Virtual Soundcard without any additional hardware soundcard.

“Dante is the most interoperable, easy-to-use digital network solution available,” says Gary Southwell, VP of Product Management at Audinate. Southwell continues, “Recently the Dante Virtual Soundcard won its third Readers Choice Award from Prosoundweb.com for the best Live Recording Software. What better way to experience how powerful and easy Dante is to use, than to own this award-winning software at this special promotional rate.”

The promotion can be found by going to www.audinate.com and clicking on Dante Virtual Soundcard special offer.

About Audinate:
Audinate revolutionizes the way that AV systems are connected, by transporting high-quality media over standard IT networks. Audinate’s patented Dante media networking technology has been adopted by over 70 OEM manufacturers in the professional audio/visual industry. Dante is used extensively for live performance events, commercial installation, broadcast, recording production, and communications systems. Audinate is a promoter member of the AVnu Alliance™. Audinate offices are located in US, United Kingdom and Australia. Visit www.audinate.com for the latest news and information on the company. Dante is Digital Media Networking Perfected.