Softube recently announced the new 4ms SMR for Modular plugin, which “can process audio like a classic filter bank, ring like a marimba when plucked/struck, vocode, re-mix tracks, harmonize, output spectral data, quantize other oscillators to scales and much more. It’s deep, versatile and infinitely expands what is possible to achieve with Modular.” 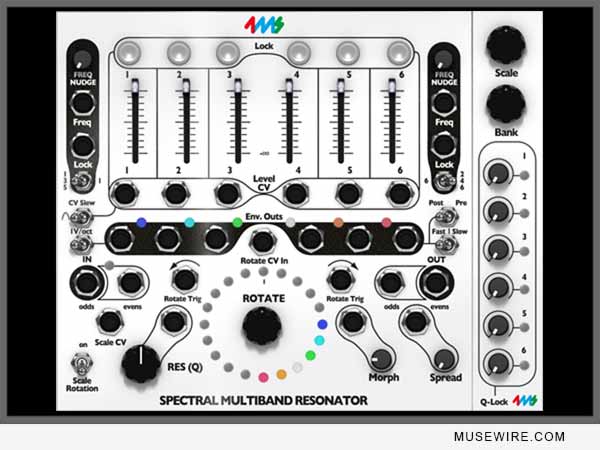 The 4ms SMR consists of six channels of resonant bandpass filters, all individually locked to a twenty notes scale displayed in the centre of the unit via the LED ring. All six filters can easily be swept around their present note scale manually or via CV. The note scales cover everything from Western scales, alternative tunings to more esoteric Gamelan and microtonal scales.

4ms SMR plug-in is light on the host computer’s CPU and comes complete with 75 expertly produced presets. 4ms SMR is an add-on to Softube’s Modular, and can only be used from within the Modular platform. It is available now at an introductory price of $39. After June 30, 2017, the module will be priced at $49.

Softube’s 4ms Spectral Multiband Resonator plug-in is officially endorsed by 4ms. It faithfully emulates both the hardware and firmware of the original unit, with some minor alterations and improvements. Want to check out the original hardware module: http://www.4mspedals.com/smr.php