Ute Lemper in Concert – A Journey from Berlin to Los Angeles

LOS ANGELES, Calif. — Personifying the cabaret genre, Ute Lemper (www.UteLEMPER.com) is known for her moody interpretations of songbook standards, laced with witty asides and knowing looks, weaving an atmosphere that draws in audiences like few other performers today.

On the occasion of the 40th Anniversary of the sister city partnership between Los Angeles and Berlin, the sultry cabaret singer and musical star will appear in an exclusive engagement at Royce Hall taking the audience on a musical journey from Berlin to Los Angeles presenting a repertoire of Berlin cabaret songs, Marlene Dietrich favorites and music by Kurt Weill, Walter Jurman, Irving Berlin and Oscar Hammerstein II. 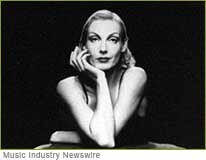 About the Los Angeles-Berlin Sister City Committee
Founded in 1967, with the objective being to promote the relationship between Los Angeles and Berlin. On June 27, 1967, Berlin became Los Angeles’ 6th sister city with the Committee’s mission to advance the relationship in every possible way between the two prominent cities: culturally, intellectually, commercially and socially.

Among the primary activities are fundraisers that promote social and cultural exchanges between the two cities, as well as specific exchanges in the field of the arts, music, literature and science. More information www.la-berlin.org