The Adam Craig Band performs for Heartland Heroes, weekend of special activities for soldiers injured in line of duty

GARDEN CITY, Kan. (MuseWire) – The Adam Craig Band performed for the third annual Heartland Heroes Hunt last Saturday in Garden City, Kansas. The hunt, sponsored by local businesses, is a weekend of special activities for soldiers injured in the line of duty, and their families. Heartland Heroes Hunt was born out of a high school graduation project that Garden City resident, Tim Telinde and his daughter, Mackenzie, worked on together.

“Each senior was responsible for creating a project that would produce a product and end result that could be measured,” explained Telinde. “I’d been in the service and had many friends serve as well. We came up with the idea of providing a weekend of hunting and fellowship for wounded soldiers and their families to help transition them back into civilian life.” 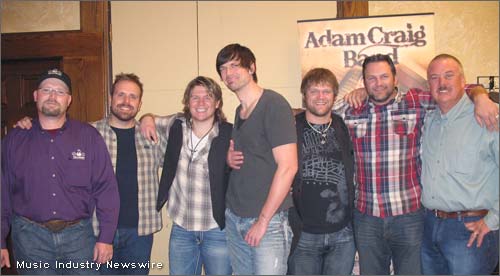 Co-founder Telinde, who owns a hunting and guide business in Garden City, and fellow business man, Brian Beavers, meet with Warrior Transition Teams at Fort Carson, Colorado and Fort Riley, Kansas each year to choose up to 20 families to come to the all-expenses-paid weekend.

Activities include swimming and games for the kids, manicure and hair appointments for the wives, and a day of pheasant hunting for the soldiers. This year the weekend culminated with a concert by the Adam Craig Band.

The Adam Craig Band was approached with the Heartland Heroes Concert idea by retired First Sergeant TJ Inslee who became friends with the band during one of their numerous trips to Fort Carson.

According to Inslee, “I had the pleasure of meeting the band while serving at the Wounded Warrior Unit at Ft. Carson Colorado in 2009. The band played on several occasions for the Wounded Warriors of Ft. Carson as well as Ft. Riley, Kansas. I felt an instant connection to them and I kept in touch. I approached them last year with the idea of playing at the Heartland Hero Hunt. They jumped at the chance to support the soldiers and their families. The show couldn’t have been better. The band embraced the men and women in uniform with the kind of kinship only found in families. I salute them and extend my deepest gratitude for their support of the Heartland Hero’s Hunt, the United States Military, and the nation’s finest; The Wounded Warrior.”

“We were honored to have an opportunity to contribute in our small way to the lives of these soldiers and their families,” said lead singer Adam Craig.

Telinde and Beavers are already talking about next year’s event and plan to include another Adam Craig Band concert in 2012.

“The Adam Craig Band put on a once in a lifetime performance for wounded servicemen and their families in our small community,” said Telinde. “The band embraced our slogan ‘healing heroes, helping families’ with 120 minutes of great music. We cannot thank them enough for coming here and making our project unforgettable.”