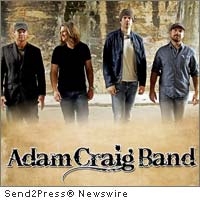 LOS ANGELES, Calif. (MuseWire) – The Adam Craig Band this week announced the video release of their hit song “Nothin’ Wrong.” The talented four young men who make up the band have evolved since their first time in the spotlight but their trademark harmonies and passion for music are still as strong as ever. “Nothin’ Wrong” exemplifies the band itself and can be described as laid back, yet energetic and fun loving. The Adam Craig Band creatively rolled all their attributes into a song that you just can’t stop humming along with.

“I love working with Adam, Brian, Jimi and Ryan,” said Jeff Catton, of InTune Entertainment, who manages the band. “They’re extremely hard working and very focused on their career.”

The “Nothin’ Wrong” video was produced in conjunction with Gamma Blast and was shot in various locations near Manchester, Tennessee. The video depicts the beauty and simplicity of a farm community which embodies the joy and the true good things in life that remain unchanged. There’s a fullness of life that can’t be bought at any price.

Many people who grew up in small towns can’t wait to get out. “There’s nothing to do, it’s so boring” are common complaints. This video helps you to realize the value of a few really good friends and the good times with them. There’s a party going on, lots of down to earth, interesting people and conversation to be found; an awesome place to enjoy a cold one and a bonfire.

In reality, the band has no time for boredom because they travel extensively throughout the year. The hectic schedule can wear even the strongest friendship down, but not these guys. They’re as close and fun to be around off camera as they are on camera. Video Director, Jeff Johnson, who’s worked with Keith Urban, Faith Hill, Tim McGraw, Carrie Underwood, Lady Antebellum, Jamey Johnson, and Little Big Town, really captured the camaraderie in the video.

Earlier this year, the guys hooked up with acclaimed producer Josh Leo, who has written songs and produced albums for the likes of Alabama, the Nitty Gritty Dirt Band, Bad Company, Lynyrd Skynyrd, Reba McEntire, LeAnn Rimes and others. Leo also spent the better part of six years playing guitar and touring with Jimmy Buffett. The first Josh Leo-produced single, “Nothin’ Wrong” for the Adam Craig Band is now on radio.